The Mystical Power of Tom Uttech

His intense paintings of the wilderness, now displayed at MOWA, pack a magical punch. 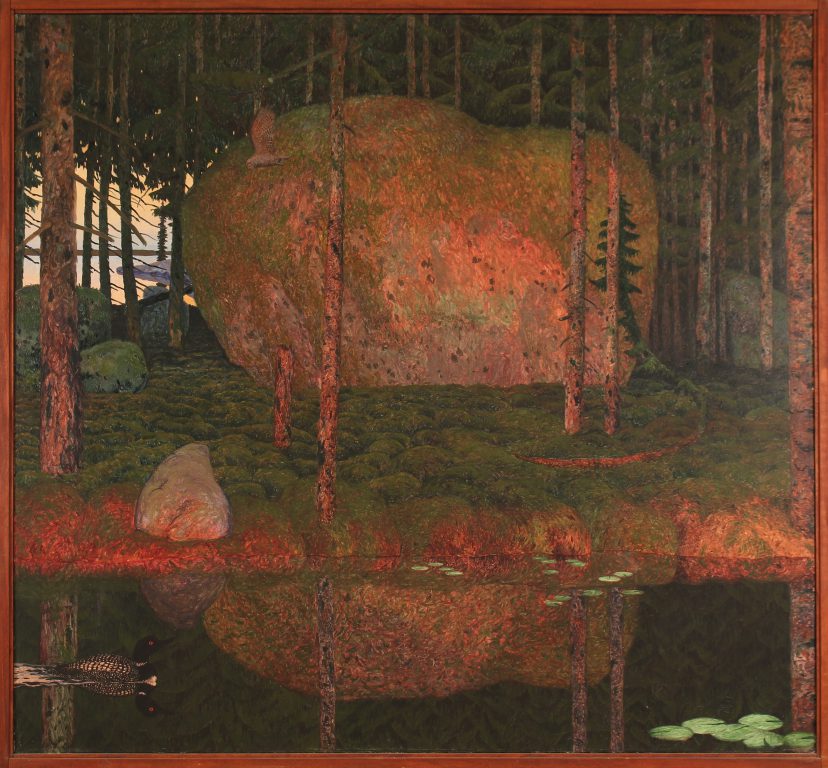 The Rock by Tom Uttech. Photo courtesy of MOWA.

I watch a young boy moving with wonder from painting to painting at Tom Uttech’s exhibition, Into the Woods at the Museum of Wisconsin Art. The museum is crowded today because Uttech will be speaking about his work. As the boy weaves through the crowd, I hear him gasp, “wow” and say, “Mom, look at this one!” pointing to one of the many Migration series paintings in the spacious gallery. His mother follows, bemused as he enthusiastically darts to the next painting. I remember the first time that I saw a group of Tom Uttech paintings at the Milwaukee Art Museum about 15 years ago. I still have those same “wow” feelings and hope to shed some light on why.

This show provides a chronological peek into the development of one of Wisconsin’s most beloved artists and features drawings, photographs and paintings. We start on the ground floor with a rare painting from 1965, Uttech’s senior year at Layton School of Art, (most of his work prior to this was destroyed in a fire). The painting has an Edvard Munch-like psychological intensity depicting a man, a shadow/specter and an owl peering at us from the middle of the canvas. They are in a dimly lit landscape with backlit foliage, one tree has a figural curve. It is a precursor to his trees with eyes of the following decade and the thousands of trees that populate future paintings like majestic dancers frozen in dusk’s golden light. This is a seed painting which indicates Uttech’s interests for the rest of his career. The rock/hill in the foreground seems to glow with the color and spirit of the man, as though he himself is the light source.

We see this same glowing rock 20 years later in “The Rock” from 1983, which Uttech says is the most important painting of his career. This mystical painting has the power of an ancient effigy. It depicts a luminous rock with animal-like energy sitting on the edge of a lush green carpet of smaller moss covered rocks. It is thinly painted with semitransparent layers of color which both reveal and conceal a bright underpainting. The rock is reflected mysteriously in a glass pond, the only ripples created by an approaching loon.

Uttech grew up in Merrill, WI where the wilderness was his playground. He speaks of his first memory of seeing a red winged blackbird swooping past him against a glowing green background and his interest in birds has continued to this day. Uttech is an artist who has been on a lifelong vision quest. During his talk, he is asked what approach he takes when going into the woods. He says, “there is none other than to have a quiet mind and to be in the moment, it’s harder than you think”. When asked what he hopes to find when venturing into the woods, his response is “perfect universal harmony”, as he indicates the edges of a painting with his hands (which may give us a clue about his approach to composition). “It has happened about four times in my life”, he says, and chuckles.

After the talk, I make my way back to his most recent painting from 2019, commissioned by the museum, called “Nin Gassinsibingwe”. It is one of the largest paintings in the exhibition and I stand in front of it, feeling bathed in a yellow/pink sunset. The landscape alone is an amazing painting full of softness of touch and maximum color intensity. Its glow is magnified by the refection in the lake. Upon closer inspection, I notice that this yellow was painted on the entire canvas first and then the foreground is painted thinly over the sky color, allowing its glow to peek through and play with the darkly painted earth and animals in the foreground. When looking at the paintings up close, there is mysteriously not much there, two or three layers usually consisting of the base color and the animal/earth/tree color. Some of the animals look as if they are made out of Sculpey clay, simple and direct. But when you step back, they become animated with a swarm of activity which covers the canvas like a scrim of motion. In this golden energy, I couldn’t help but think of Titian’s yellow-skied “The Assumption of the Virgin” and how the Sixteenth Century spectators must have felt a sense of awe to see a huge painting of the supernatural painted with such naturalism. I feel that same sense of awe in front of this otherworldly reality and I urge you to take the journey to MOWA before January 12 to experience it for yourself.

Into the Woods Gallery 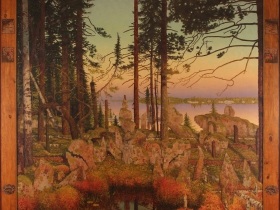 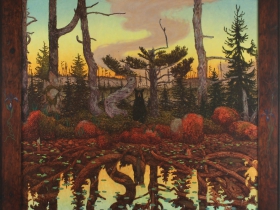 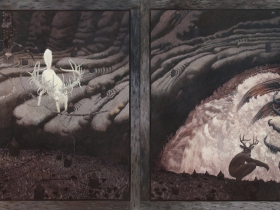 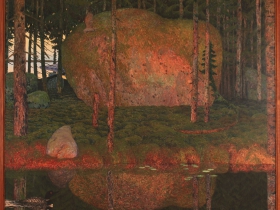 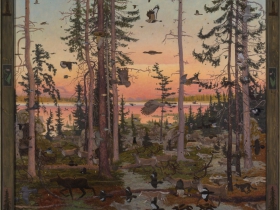 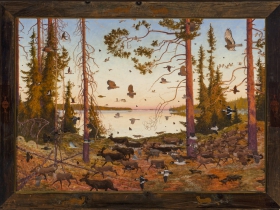 Tom Uttech’s, Into the Woods, at the Museum of Wisconsin Art in West Bend.