By Ruth Conniff, Wisconsin Examiner - Jan 2nd, 2020 11:54 am
Get a daily rundown of the top stories on Urban Milwaukee

Gov. Tony Evers doesn’t wish he’d done things any differently during his first year. “No, not really,” he says when asked the question during a year-end interview with the Examiner at his Capitol office. “I suppose I could use a better choice of words from time to time.” Other than that, Evers feels he’s done the best he could.

“People are concerned that I don’t meet with [Senate Majority Leader] Scott Fitzgerald and [Assembly Speaker] Robin Vos more often,” Evers says. “We ask them. Sometimes they show up, sometimes they don’t.”

And sometimes the governor calls on the legislature to meet on an issue — like funding services for the homeless or addressing gun violence — and the Republicans refuse to even show up.

It’s a frustrating way to work.

But Evers keeps plugging away.

“Having better discourse is a good thing,” he says dryly. “But if it doesn’t happen, we’ll just carry on.”

The highlight of Evers’ year, he says, was working on the state budget, traveling around the state and getting input from Wisconsinites about what they wanted. When the budget was released, he traveled around the state again “confirming that people wanted to have better schools and better roads and better health care.”

A bruising budget battle followed, during which the Republican legislative leaders essentially threw away Evers’ painstakingly assembled People’s Budget and replaced it with their own. Then Evers used his partial veto to claw back modest gains, most notably in education spending. It hardly seems like a triumph.

But Evers is philosophical about it.

“We set a real high bar. Did we get to where we wanted to? Of course not. That’s the way it works.” He points to the increases in school funding (which still left 40% of school districts with decreased state aid), modest headway on healthcare and “getting rid of some of the potholes in the state —we don’t call them Scott holes anymore.”

Still, he concedes, “I almost vetoed the entire budget. But I think that would have taken us backwards instead of forwards.”

‘Not what I was elected to do’

Lowlights of Evers’ year include the fallout from the lame duck session, where the legislature stripped powers from the incoming governor and attorney general before they even took office. He says he had no heads-up in advance and calls it a “sneak attack.”

“Frankly, if those things were so important to the Republican legislature, they probably should have taken that up when Walker was governor and see if he would have signed that,” Evers says. “So the whole thing, obviously, was a political deal, which was too bad.”

The other lowlight of the last year, Evers says, is the way the legislature has treated his nominees as cabinet secretaries, leaving many unconfirmed after a year on the job, and, in the case of former Ag Secretary-designee Brad Pfaff, “someone has been fired for no apparent reason.”

Evers appears to have the patience of Job (apart from a few salty words when Brad Pfaff was fired). It comes naturally, he says. “I’ve always been this way.”

“But having cancer gave me a different perspective, too,” he adds, “and when somebody says something stupid, you just say, ‘Have at it.’”

Still, the impasse with the legislature raises some existential questions. What’s the point of calling special sessions if the Republicans don’t show up and nothing gets done?

“Not doing it just so that we can get along and do nothing—that’s not an option,” Evers says. He will likely call on the legislature to take up more issues in the coming year—whether the Republicans like it or not. “We may actually get them to come in to talk about things at some point in time. But just not doing it because they think that’s not getting along—well, OK, we can all get along and do absolutely nothing. That certainly is an easy route, but that’s not what I was elected to do.”

‘That’s the way those idiots are’

Evers seems determined to keep rolling that rock uphill in the Capitol. And he doesn’t sound particularly hopeful that a bigger audience of voters is cheering him on.

“Even if you look at the high-profile discussion that we’re having about impeachment around this nation, a lot of people aren’t paying attention to it,” he points out. So he wouldn’t be surprised, he says, if people are tuning out the power struggle between the branches of state government.

“There are many people who just ignore it as ‘that’s the way these idiots are,’” he says.

“When I ran, you know, we were hearing about education. We heard about growth, we’re hearing about health care. But we also heard a lot of ‘We need to find common ground and stop screwing around.’”

Evers’ whole approach to working with the legislature, he says, is “trying to find areas where seemingly there is common ground.”

But the ground keeps moving.

On money for the homeless, for instance, Evers is convinced that the bill Republicans on the Joint Finance Committee refused to discuss would pass the legislature if it were put to a vote, and he would sign it. Yet instead, it’s bottled up by the Republican leadership.

“To me, there is common ground to be had there,” he says. “A small part of the Senate is saying no, we aren’t going to spend the money on homeless people. And so, somehow, the majority of the legislators, frankly, is being controlled by three, four people, which is just crazy.”

Among his administration’s top priorities for 2020 is criminal justice reform — joining a national, bipartisan drive to reduce prison population and invest in rehabilitation. “I think we can make headway on that,” Evers says.

Another top priority is pushing for a fair and balanced redrawing of Wisconsin’s heavily gerrymandered voting maps after the 2020 census. “If we don’t spend our time in 2020 talking about that and accomplishing some things and getting ready, we’ll have 10 more years,” he says, “and that’s unacceptable.” 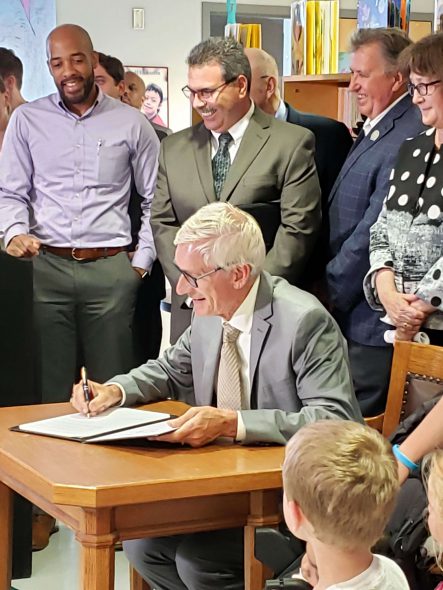 Clean water is another top goal. Just because Evers declared 2019 the year of clean water doesn’t mean that issue will take a back burner in 2020.

Problems with PFAS contamination continue to emerge. Evers is dismayed that the statewide business lobby Wisconsin Manufacturers and Commerce has opposed regulating newly discovered chemical water contamination, even before the research is done or the regulations are spelled out.

“I can’t believe that’s a winning argument … ‘OK, we’re against regulations.’ So the alternative is, you’re okay with crappy water? You’re not gonna win that argument. And so I think we’ll have some robust discussions about that this next year.”

Public education advocates were elated when the first teacher and former head of the statewide public school system was elected, and when he proposed significant increases in school funding after years of drastic cuts, and a thoughtful effort to make funding more fair. Then they were crushed by the final outcome in the state budget.

The elephant in the living room in any discussion of state public education funding is the expanding voucher and charter school sector, and its extremely powerful lobbyists in the Capitol.

Evers has not taken a hardline stance against voucher and charter schools. Asked about the problem of draining funds from already-strapped public schools, he starts with a no-brainer — the effort to inform taxpayers exactly how much they are paying for the voucher expansion, just as public-school funding and other services are broken out on property-tax bills.

“I certainly support any legislation to make it more transparent, especially for taxpayers,” Evers says. “I mean, people should know where their tax dollars are going.”

“But,” he adds, “I also have the belief that even in this weirdly competitive environment around that issue, the public schools still do well.”

For the last several years, he points out, a lot of the kids who are getting school vouchers are those who were already in private school.

“So it’s less of a choice issue and more about subsidizing a separate system,” he says, “Now we need to have a discussion about that. How much of that can we actually accomplish?”

We need to ask, Evers says, “whether the public at large agrees that we should be subsidizing parochial education.”

“That’s never been asked,” he adds. “It’s always been asked, ‘Should people have the opportunity to have the same choice that wealthier people do?’ That’s a reasonable thing to discuss. But if the discussion is, should we subsidize private education? Is that right? That that’s never been discussed. Never. We should talk about that.”

‘A bunch of old white guys’

One of the most striking changes from the Walker to the Evers administration is the visible diversity of Evers’ cabinet.

Evers, who made diversity a priority when he ran the Department of Public Instruction, has given the matter a lot of conscious thought. Like his ability to keep pounding away at his agenda, even as he is blocked by Republican legislators, it seems to be attributable to both his temperament and his way of thinking about the long game.

“There’s something internal in my life that tells me that diversity is a real important thing,” Ever says. “ I was raised in a non-diverse environment. I see how that doesn’t help me, frankly, as an adult.”

As the state’s largest employers, the government is competing with companies all over Wisconsin for employees, he notes. It can be a struggle to retain people of color in Madison, he adds, since it’s “not a very welcoming environment.”

“I believe diversity makes you smarter,” he says. “But it’s hard when people with diverse backgrounds don’t want to take jobs in state government or work in Madison.”

“That’s what keeps me awake at night — that issue, Because if we don’t bring more people into the state … If we don’t do that, we don’t have enough people to do the work. It will be a bunch of old white guys. Not good.”