Fitzgerald says bill may be introduced next year. But casts doubt on homeless funding.

By Laurel White, Wisconsin Public Radio - Dec 22nd, 2019 05:20 pm
Get a daily rundown of the top stories on Urban Milwaukee 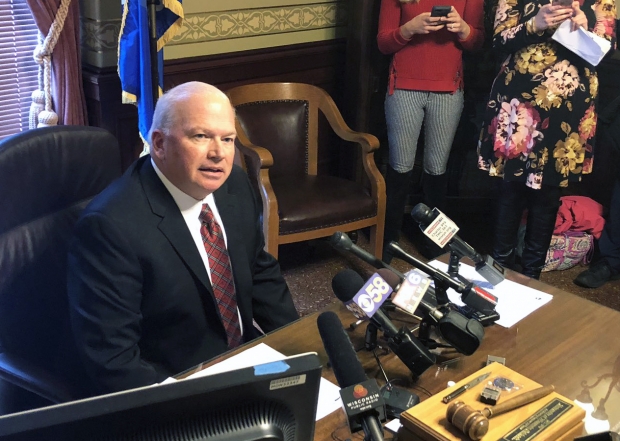 A new property tax cut is in the works at the state Capitol, according to the leader of the state Senate.

Fitzgerald said he’s been hearing concerns from people in his district about the size of their tax bills.

“People are a little surprised,” Fitzgerald said. “It’s still anecdotal, but people are concerned about a bump in their property tax bill.”

Fitzgerald said “most of that (increase) has been generated by decisions made at the local level.”

A new report from the Wisconsin Policy Forum, a public policy think-tank, found school districts statewide this year are levying the largest year-over-year increase in property taxes since 2009. The state budget included an increase in revenue limits for schools, meaning they could raise property taxes more than in previous years.

Fitzgerald also shed light on an ongoing tussle over roughly $7 million in funding to support services for homeless individuals and families in Wisconsin.

This week, Gov. Tony Evers attempted to call the Legislature’s state budget committee into session to give final approval for the funds, which were included in the state budget but have also been introduced as standalone bills. Republicans declined to attend the meeting, citing concerns among GOP Senate lawmakers about moving forward with the spending.

Fitzgerald said some senators didn’t feel included in the process of drafting the plans, which came from an Interagency Council on Homelessness created under former Gov. Scott Walker and chaired by former Lt. Gov. Rebecca Kleefisch.

“The homelessness package is a frustrating topic for us right now,” Fitzgerald said. “Of course, homelessness is a big concern of anybody that’s in the Legislature, but it’s just, at this point in time, it’s really hard to get the momentum, create the momentum to get the votes for that package.”

Fitzgerald noted some senators have raised concerns about the price tags on individual initiatives in the package.

“The price tag associated with each bill seemed to be somewhat arbitrary,” he said.

The senator also reiterated his opposition to legalizing medical marijuana in Wisconsin. His comments come on the heels of Assembly Speaker Robin Vos, R-Rochester, saying a Republican-sponsored medical marjiuana proposal won’t move forward in the Assembly this session.

Fitzgerald said he will never personally support a medical marijuana bill. He cited concerns with legalizing one form of marijuana while the state is grappling with substance abuse issues like drunken driving, the opioid epidemic and rising meth use.

“We’re spending all this energy trying to get a control on these substances that are just wreaking havoc across the state,” Fitzgerald said. “I don’t know why this is a good time to introduce legal marijuana in Wisconsin. It doesn’t make any sense to me.”

One thought on “Republicans May Push Property Tax Cut”