A Love Letter to ‘Dairylandia’ 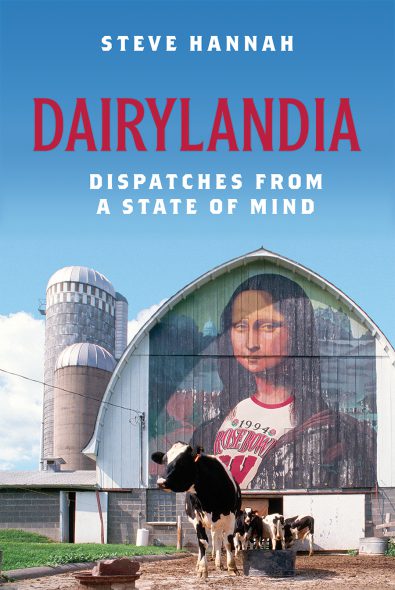 If you have had an over-dose of distressing news and melodramatic, tit-for-tat politics, Steve Hannah has a remedy: his new book “Dairylandia” that is his “little love letter to Wisconsin.”

Hannah wrote his book dedicated to something he calls “Wisconsinism’ after a diverse and distinguished newspaper career here, including managing editor of the Milwaukee Journal, roving writer for other state newspapers in a column called “State of Mind,” and CEO for “The Onion,” a satirical publication out Madison that went national.

He brought his charming self and his book to West Bend for an author gig at the Museum of Wisconsin Art. His portrait of the state and its people provided laughs and warmth on a winter Saturday morning.

An immigrant from New Jersey and Colgate University in New York, (he ended up here because of a girl), he wrote about his adopted place:

“I’m convinced that living amid fragrant forests, mounds and bowls shaped by the last glacier, and lakes and rivers and streams that shimmer in the sunlight and moonlight has been good for my immortal soul.

“And I am absolutely convinced that living in Wisconsin all these years has added health and happiness to my life. I’ve already lived longer that my father. In my family, that’s a milestone.”

He wrote this about his adopted people: “Wisconsinites are modest and understated. Most of my friends, neighbors and ‘State of Mind’ subjects abhor the thought of drawing attention to themselves. Bragging is considered poor form.

“They seem to have an innate understanding of humility – the rarest of qualities. Humility permits you to understand the very minor role you play in the cosmos and guides you to conduct yourself accordingly.”

One thought that leaps to my state of mind after listening to Steve is that President Trump, who narrowly carried the state in 2016, would not be very much at home living here. A guy who needs center stage, all day, every day is not our kind of guy. That doesn’t mean he won’t carry the state again. Go figure.

There is wealth in Wisconsin, but it is seldom flaunted. Our rich guys often have cabins up nort’.

Our politicians tend to be highly educated and generally modest in how they present themselves. Their flamboyance shows only in riding Harleys.

One of the poignant interactions during Hannah’s talk was his answer to my question: “Do you miss the hard news side of journalism?” A talkative guy, he answered “no” and passed the microphone back to me.

His retreat from hard news to sweet stories on characters in Dairyland had a lot to do with a member of his MOWA audience. Sitting in the front row was Jerry Boyle, one of Wisconsin’s most infamous attorneys. In the early 1990s, Boyle defended Jeffrey Dahmer, the reviled and notorious serial killer of 17 people, while Hannah managed the news coverage of the arrest and long trial. It was grueling for both men.

Hannah quotes Boyle’s recollection after the guilty verdict. He had taken a lot of abuse for defending Dahmer. He is leaving the courthouse “past the people whose loved ones had been murdered and dismembered by my client. And as I pass, one of them reaches out and touches me – my hand, my sleeve, my arm – and they say, ‘God bless you” or ‘Thank you.’ The victims’ families acknowledged that I had played it straight. That was as moving a moment in my professional life as I can remember.”

Most of the Hannah book is on the bright side of life. Emma Washa was one of his heroines. She wrote column for the weekly Boscobel Dial until she died at 105. As the oldest columnist in the country, she got invited to go to California and appear on The Tonight Show. “I said no, thank you very much. Who’s got time for such nonsense?”

I asked Hannah what he makes of the proclivity for natives to look foolish by wearing Cheeseheads. We agreed that it demonstrated that we dairylanders can laugh at ourselves.

Hannah wrote in his reports from all corners of the state that most Wisconsin people don’t need to impress and are generally content with what they have. “You can like Wisconsin if it suits you, but if you don’t – or if it is just too damn cold for you in winter – well, then, go live somewhere else. And good luck to you.”

Hannah has moved part of the year to Austin, Texas. Good luck to you down there, Steve.

A postscript: Like Emma, he plans to keep on writing.