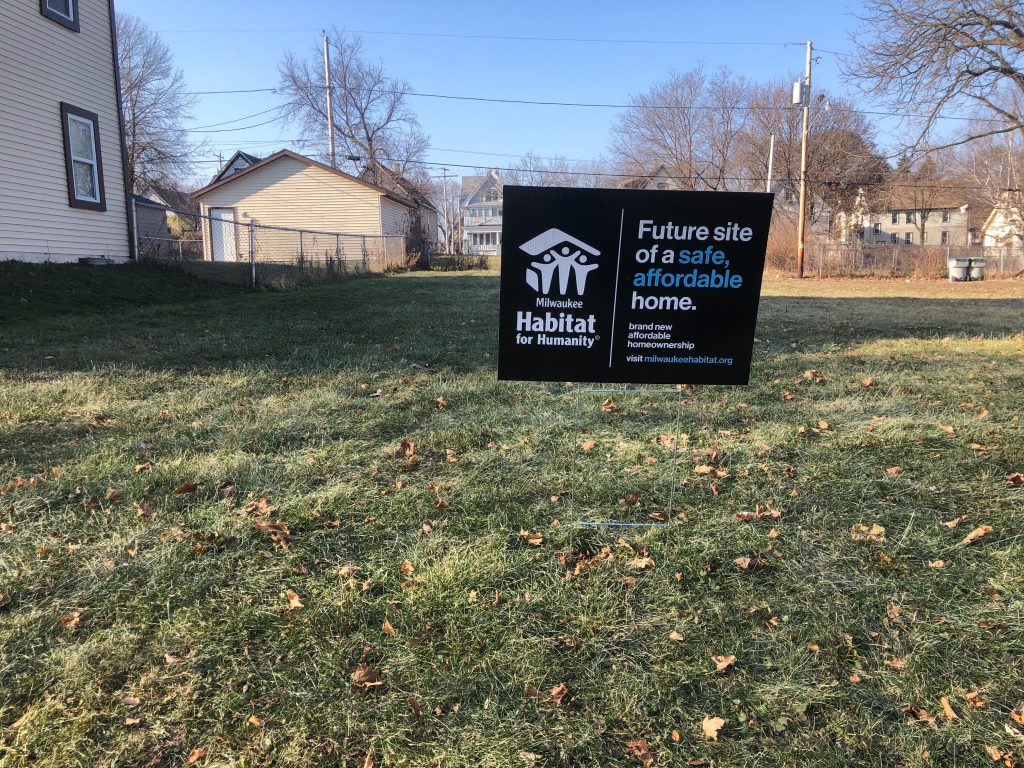 The future site of a Habitat home at 3459 N. 3rd St. Photo by Jeramey Jannene.

Foundation president Dan Bader announced a $1 million gift Thursday morning that will fund the construction of 40 new homes by Milwaukee Habitat for Humanity in the neighborhood and pay for critical repairs for on 20 more, targeted at allowing home owners to stay in their home.

The gift will build capacity for Habitat, allowing it to continue its effort to build or repair 100 homes in the city’s Midtown neighborhood while ramping up its Harambee revitalization campaign. In total the group expects to build, repair or rehabilitate 250 homes by 2023 in Midtown, Harambee and other north side neighborhoods as part of a $18 million campaign.

“We know that one in three Milwaukee renters are spending more than half their income on housing,” said Milwaukee Habitat executive director Brian Sonderman. “That’s unacceptable.”

Bader and Sonderman were joined by city officials and neighborhood stakeholders in a vacant lot to make the announcement.

Bader said the gift came out of discussions with neighborhood residents and stakeholders on what would make the greatest impact. The foundation moved to a redeveloped building in the neighborhood in 2018 and announced the redevelopment of a second King Drive building earlier this year.

Harambee, which stretches from W. North Ave. to W. Keefe Ave., Interstate 43 to N. Holton St., is a Swahili word for “all pull together” said area Alderwoman Milele A. Coggs. “There is no greater example of people pulling together than what we are witnessing and celebrating,” said the alderwoman. She praised the foundation for not telling the neighborhood what it needed, but listening to the community. Coggs said the organization’s investments will help the neighborhood recover from the financial crisis and years of neglect.

The median household income in the neighborhood is $19,300 according to a report from Habitat. The report says that more than half of its residents live in poverty, but pay rents in excess of $800 month. The report said the rental price is similar to what is found around Humboldt Park in Bay View, where only 10 percent of residents live in poverty. Twenty-two percent of Harambee homes are owned occupied.

Mayor Tom Barrett praised Bader. “This is a family that understands what community is all about,” said the Mayor. The foundation was founded by Helen and Alfred Bader. The couple founded a chemical company in Milwaukee that is today known as Sigma-Aldrich Corporation. Dan Bader said it was important to his parents that the company was located in the city and the foundation seeks to maintain that commitment to the city.

Barrett, who is running for re-election, drew laughs with a story about how politicians are always looking for yard signs at this time of year. He said he noticed a number as he approached the press conference. “Of course, they’re lawn signs that say Harambee Habitat, this is going to be a where a new home will be. I thought ‘I would vote for that guy,'” joked Barrett.

On a serious note, Sonderman detailed how Habitat’s focused efforts are helping not just the families that get to live in the homes. He said the organization’s 225-home Washington Park campaign resulted in a 46 percent reduction in crime on blocks where homes were built.

Habitat homeowners earn their homes largely through sweat equity. They’re required to put in at least 250 hours of work on the home, including financial literacy courses. One of the Midtown homeowners, Haynie Smith, shared his story with the crowd.

“I’m just here to say ‘Habitat is where it’s at,” said Smith. He said his house, located near N. 25th St. and W. Brown St., has offered him and his family housing security after living in two different homes where he was paying rent, but the landlord didn’t pay the mortgage. Smith told the audience that the housing security has allowed him to be a better father to his two children and has helped him get married. Smith has also helped form a neighborhood association.

Sonderman said the average recipient spends 24 percent less on housing after moving into their Habitat home. Over 2,500 volunteers help build or repair homes for Habitat every year.

The city will sell a number of vacant lots to Habitat for $1 to support the project, including the site of the press conference at 3459 N. 3rd St. The city’s Housing Trust Fund also just announced a $50,000 investment in the organization. 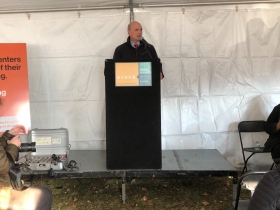 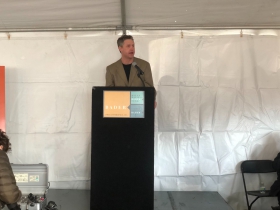 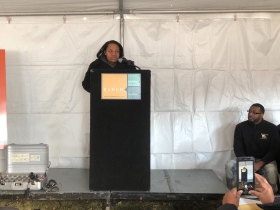