By Alana Watson, Wisconsin Public Radio - Dec 18th, 2019 10:18 am
Get a daily rundown of the top stories on Urban Milwaukee 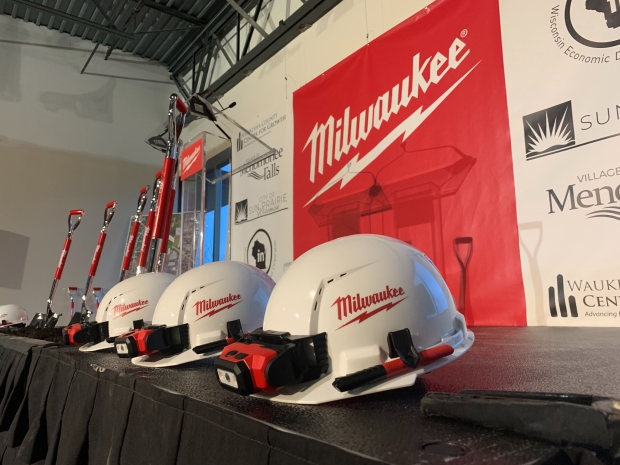 Hard hats and shovels are lined up at a groundbreaking event for Milwaukee Tool’s new facility in Menomonee Falls. Photo by Alana Watson/WPR.

“Milwaukee Tool demonstrates that Wisconsin products — and Wisconsin workers — are the best not only in the nation but in the world,” Evers said during the groundbreaking in Menomonee Falls.

Milwaukee Electric Tool Corp., known for its M12 Cordless system was founded in 1924 and manufactures popular power tools for professional construction workers. They also produce lighting fixtures, accessories, hand tools and storage items. The company’s headquarters is in Brookfield, where everything is designed and manufactured.

With the recent developments, a new 2.5 million square foot campus will be built on 65 acres of land in Menomonee Falls and the company is extending its Imperial Blades manufacturing operation in Sun Prairie.

Milwaukee Tool wants to invest over $100 million in the new Menomonee Falls multi-purpose campus and invest $7.5 million to expand the subsidiary in Sun Prairie. The new additions will give the company more room to expand and support Milwaukee Tool’s efforts to grow internationally.

“Our people and our culture are our most valued resource,” Milwaukee Tool Chief Financial Officer Ty Staviski said. “We are excited to work as a team to continue to deliver disruptive innovation to users on job sites around the world.”

WEDC has been working with Milwaukee Tool since 2016 to help with development. The corporation leads economic development projects for the state by providing support, resources and financial assistance to companies and communities in Wisconsin.

According to Hughes, after a few amendments, the manufacturing company pledged to create 1,812 new jobs and invest $174.5 million in capital expenditures in Wisconsin over a five-year period. If the company reaches its goal, the state would give up $46 million in tax incentives and could generate about $7.2 million annually in state income taxes.

WEDC researchers believe Milwaukee Tool’s expansion could also indirectly generate an additional 4,017 jobs in the region that would generate around an additional $8.3 million in state tax revenue.

Milwaukee Tool hopes to complete construction on the Menomonee Falls campus in the next two years and start expanding its Imperial Blades manufacturing operation in the next three to four months.