Waldek Dynerman’s “Oil and Cement” will make you feel before you think. 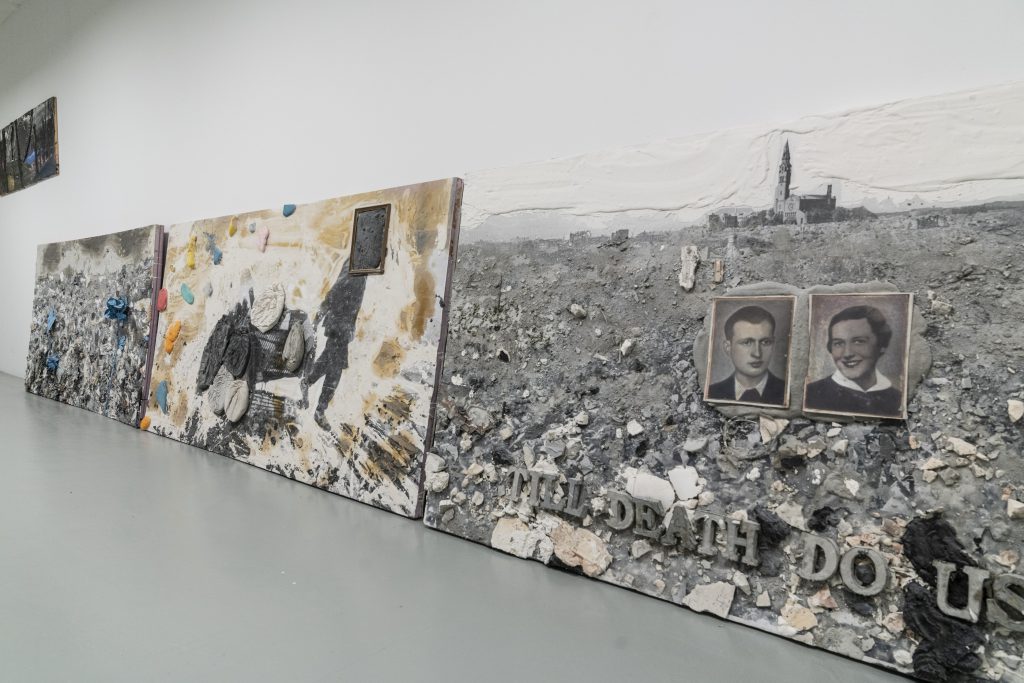 Opening the door of Hawthorn Contemporary, I was hit by the thick aroma of oil paint. Because there are studios in the building, I assumed the smell was coming from them. But as I ventured further into Waldek Dynerman’s show, “Oil and Cement” I realized it was his large, unstretched paintings on the walls that emanated this aroma. When I tried to smell it again, the scent seemed to disappear like a phantom.

The gallery has been transformed into an environment by the artist: in the center is a gathering of limbless human forms, busts and pedestals lit by multicolored lights which hang from dangling chords. It is a cemetery: each pedestal is a grave marker made with pink Styrofoam, occasionally exposed and emotionally slathered with paint/clay/mud/cement. One headstone has a clock menacingly ticking away. Human busts in different states of metamorphosis look out at us. The “figures” seem haunted, worn, haggard, as though they have seen and heard more than most. A child’s doll, dappled in clay/soot/paint leans against a headstone. The materials are ambiguous. Paint merges with mud, cement, plaster, plastic garbage and photos. Smaller paintings are hung at different heights in the gallery as well as large paintings on pink Styrofoam leaning against the walls, creating a connection to the sculptures. A miniature wooden boat, which Dynerman found at a thrift store and coated in rubber, has been appropriated into this body of work and plays a role in many of the paintings. It is a symbol of the refugee crisis and when viewed in the gallery, feels isolated against the sea gray painted cement floor.

One large painting done on a Styrofoam panel (most work in this show uses some kind of repurposed material) leans against the wall and depicts a woman fleeing an area in strife. In the background, a plume of ashen smoke painted in thick impasto, hangs ominously over a scarified landscape. The paint is piled on, smeared in and poured over the surface. The woman is an appropriated image from Eugene Delacroix’s “Orphan Girl at the Cemetery” and connects Dynerman to a long historical context of art as social commentary viewed through his own experience of the world’s injustices — much like Goya did with his etchings or Courbet with his caricatures.

Another painting, which incorporates collage, shows a figure pulling a grocery cart trough a desolate environment which is all but whited out. Rust stains leach through and surround this anonymous wanderer whose cart is filled with black, white and gray grocery bags smashed and adhered to the surface, blurring the line between painting and sculpture. The figure is walking away from ambiguous fragments of three-dimensional colored shapes, joyful memories embedded into the thick paint like an incomplete mosaic.

As I was looking at this piece, I heard the door slam and a woman exclaim with a childlike voice, “Isn’t that beautiful!” I turned to see a woman in her late 40’s with long brown hair wearing a pink backpack with matching shoes. She was panting and wiped perspiration from her forehead. “I lost my bus pass and I’m walking to Oak Creek and thought I would stop here”, she said in a relieved voice. She circled the room and admired the work. As she neared, I noticed that her backpack and shoes were worn, the pink had faded and she looked like she stepped out of this exhibition. I thought of her walking from Walker’s Point to Oak Creek and when she said goodbye I asked if she needed bus fare. Her eyes filled with tears as she pushed her bulky jacket close to her stomach and said, “thank you, I’m pregnant and this will help me so much.”

Dynerman’s work inspires empathy. It is art with a conscience that shines a light on the plight and struggle of those less fortunate in a world that often turns a blind eye to them.

“Oil and Cement” runs through January 25 a the Hawthorn Contemporary gallery, at 706 S. 5th St. It’s a show well worth your time. 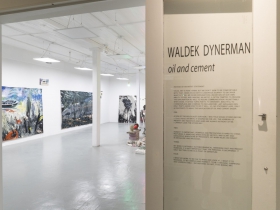 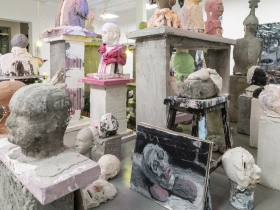 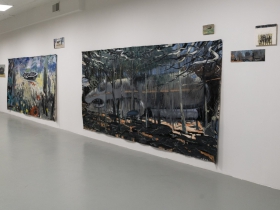 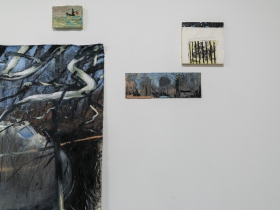 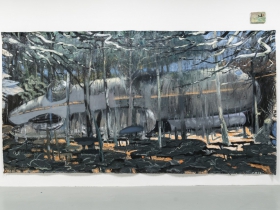 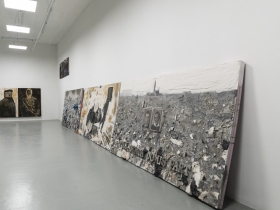