By Corri Hess, Wisconsin Public Radio - Dec 17th, 2019 12:09 pm
Get a daily rundown of the top stories on Urban Milwaukee 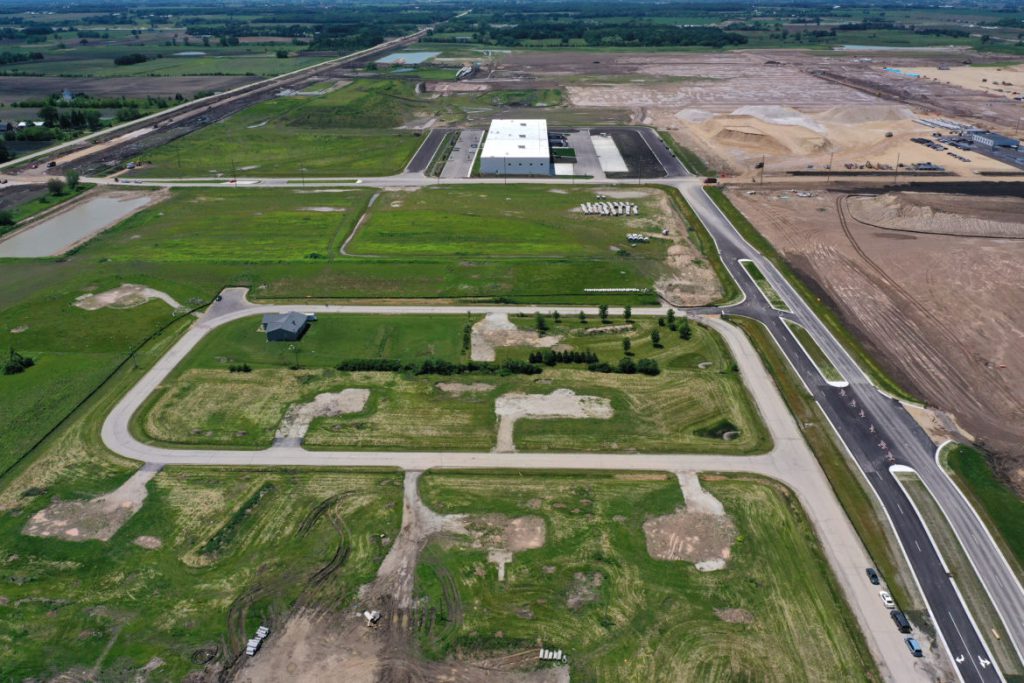 Kim Mahoney’s house on Prairie View Drive is the only house still standing in her subdivision, out of an original 13 properties. All other property owners sold to the village of Mount Pleasant, Wis., and their homes have been demolished to make way for the Foxconn plant. A building on the Foxconn site and the Foxconn construction area are seen in the background. Drone photo taken on July 1, 2019. Photo by Coburn Dukehart / Wisconsin Watch.

A Foxconn executive says the company has been unable to recruit employees necessary for its development project in Wisconsin.

Alan Yeung, Foxconn’s director of United States Strategic Initiatives, said the company has traveled across the country, “from North Carolina, to Illinois, to Michigan, to Ohio and Kentucky” to attract talent to Wisconsin, but it has fallen short.

“Foxconn has been relentlessly visiting colleges around Wisconsin to recruit and hire professionals at the beginning of their careers for roles in Industrial Artificial Intelligence, Smart Manufacturing, 5G Networks and High-Performance Computing,” Yeung wrote in a Nov. 18 letter to Joel Brennan, secretary of the state Department of Administration. “With the low unemployment rate, we have encountered great difficulties in recruiting the talents we need.”

Meanwhile, documents released last week by the Evers administration show an ongoing rift between the state and Foxconn since April.

In repeated letters, the Evers administration has told Yeung and other Foxconn executives that unless the company amends its 2017 contract with the state, it won’t be eligible for state tax credits.

When the original contract was signed, Foxconn promised to build a 22-million-square-foot so-called Generation 10.5 plant. Foxconn now plans to build a smaller Gen 6 facility. That change and Foxconn’s subsidiaries that have since become involved in the Wisconsin project need to be added to the contract, according to the Evers administration.

In the Nov. 18 letter, Yeung said Foxconn has invested millions into the state and hired jobs seekers.

“These efforts are being impeded by the current administration’s red herrings over the material terms of the contract,” Yeung wrote.

“The economy is good, so people don’t have to move,” Lee said.

Cedarburg-based WorldBridge Partners has 11 offices in the U.S. and one in Belgium. While it doesn’t work with Foxconn, Lee said he has gotten calls about the company.

“I would say there is, in general, a bit of uncertainty (about Foxconn),” Lee said. “If I was a manager, or executive, or a line employee I would wonder about that. And there are so many other opportunities, that Foxconn is just another employer that may be attractive, but there are a lot of choices.”

Assembly Minority Leader Gordon Hintz, D-Oshkosh, said if Foxconn is having trouble finding workers, it could be because they aren’t willing to pay as much.

“It seems as if they’re trying to shift the blame,” Hintz said. “The reality is, I don’t know what finding employees has to do with the fact that they are not doing anything close to what they said they set out to do and the fact that we still have no idea what they are ultimately building and what they will be producing.”

Last month, researchers at the Virginia-based Mercatus Center at George Mason University found Wisconsin’s deal with Foxconn would not work.

Michael Farren, an economist and head researcher of the study, said Foxconn’s claim that they can’t find workers in Wisconsin, could be true, but it could also be posturing to pressure the state into giving them subsidies.

“Not to be cynical, but they could be saying if Wisconsin does not approve the new Gen 6 plant for subsidies, then all options are on the table,” Farren said. “There is always a bit of gamesmanship that goes on by companies and politicians.”

Farren cautioned the Evers administration not to make another bad deal in the future.

“If Foxconn does not qualify for the subsidy, let this current bad deal die,” Farren said.

“Those were in the original RFPs and information shared with the state,” Yeung wrote in the text message. “The balance of the jobs creation are not necessarily or entirely dependent upon or tied to Gen 6 or 10.5. I said that many times in the past. We are simply focusing on 3E — economy, employment and education, rather than immaterial terms. Foxconn believes it is in compliance with the terms of the agreement with (Wisconsin Economic Development Corp.); it will continue to work with the state in good faith. Foxconn is hopeful that the state and Foxconn will arrive at a mutually acceptable resolution so as to continue with this transformational project that is important to both Foxconn and Wisconsin.”

One thought on “Foxconn Says it Can’t Find Workers”