Where Have All The Hunters Gone?

By Melanie Conklin, Wisconsin Examiner - Nov 29th, 2019 04:59 pm
Get a daily rundown of the top stories on Urban Milwaukee 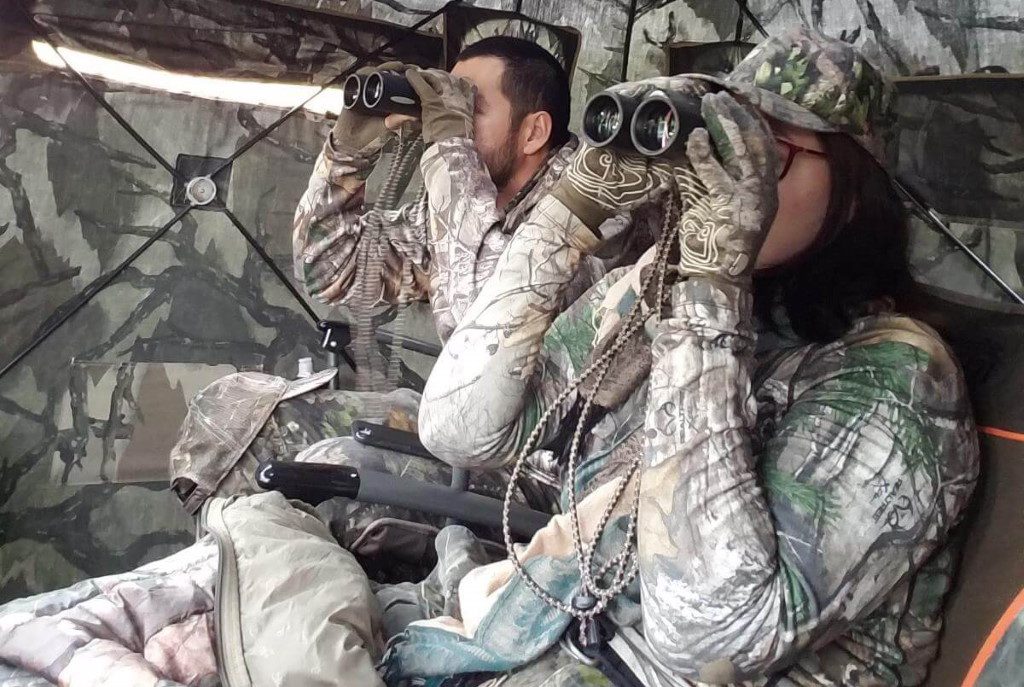 Husband and wife duo Martin Perales and Flora Csontos are Wisconsin transplants who fell in love with hunting through the DNR’s free Hunt For Food program. From making new friends, learning new skills, bringing home the meat to enjoying the outdoors, Martin and Flora say Hunt For Food is well-worth the small commitment. The couple is hunting turkey after class. Photo from the Wisconsin DNR.

If you are out hunting over this holiday week, take a look at the fellow hunters you encounter, perhaps warming up in bar, lodge or other gathering place. Are they all middle-age men? The number of hunters in Wisconsin has been declining, but one solution enthusiasts are exploring to mitigate that trend is reaching out to non-stereotypical types of hunters.

“We’ve made a big effort to open up hunting for new people,” says Keith Warnke, hunting and shooting sports coordinator at the state Department of Natural Resources (DNR). “We’ve seen a big uptick in women hunters, from 6% of the deer hunting licenses 10 years ago, up to 12% currently.”

The drop in hunters is a national trend. The U.S. Fish & Wildlife Service’s most recent national survey done in 2016 showed that in both percent and numbers of people over 16 who hunt, there’s been a marked drop since the early 1990s. Warnke says a big factor is the aging of Baby Boomers who have stopped hunting, and that millenials are less likely to hunt.

So the DNR and state legislators who have a passion for outdoor heritage activities have gotten creative, changing laws and starting up new programs.

“It’s a part of the social fabric of Wisconsin life, both hunting and angling,” Warnke says. “It’s a big part of what we do as families, too.”

Growing the number of Wisconsin hunters is important for a number of reasons, says Warnke, including fortifying bonds among family and friends. He hunts with his daughters — now both in college — and says while his wife does not hunt, she is very supportive and loves the duck and venison. 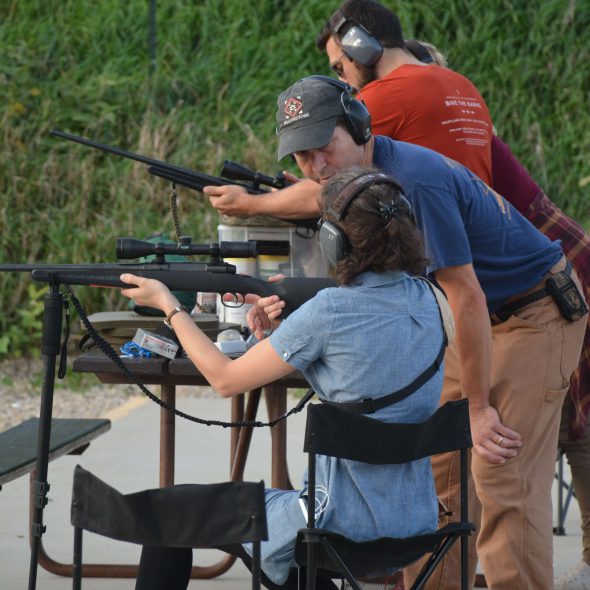 Warnke says multiple studies have shown that having a strong family network that hunts drives participation and keeps people hunting. And that success rate “substantially” increases if the mother is involved: “When mom hunts, the kids are much more likely to hunt.”

The DNR’s required hunter safety class is available for those ages 12 and up. And children ages 12 to 14 can have a license after completing the class, so long as they stay within voice or visual contact with an adult. “We will certify 18,000 to  20,000 [people] this year, says Warnke. The department also has guidelines and programs to facilitate and encourage people with disabilities who want to hunt.

Hunting is also, he notes, a big part of conservancy, including managing the deer population, which in turn reduces auto-deer collisions and damage to agricultural land.

Finally, the license fees are a major source of support for DNR conservation management efforts. DNR statistics show that  “Our fish and wildlife account was fully funded by hunters, anglers and target shooters,” adds Warnke. “Although when it comes to dollars and cents, that’s not the overriding argument.”

In addition to hunter safety classes and programs for novice adult hunters, the DNR offers Hunt for Food courses. Often attended by young adults from urban areas who care about sustainability, these classes focus on sustainable food, conservation, species biology, finding hunting lands and even cooking and preparing food after a hunt. They also include an optional hunting day.

“This certainly does diversify the potential clientele we can reach out to,” says Warnke. “It also opens up relationships with sustainable farmers…and the students get to hear about the food from the perspective of the grower and landowner.” He says the program has been a big success. “Many young adults are very focused on food sourcing and collecting their own food.”

Outside of the DNR, there are a variety of groups that encourage, train and support women hunters. Becoming an Outdoors Woman (BOW) is part of the UW-Stevens Point and has been encouraging women to learn outdoor skills since 1991. It’s now popular across the country and Canada.

It’s coordinator, Peggy Farrell, has been with BOW for 24 years mentoring new deer and turkey hunters as well as coordinating hundreds of BOW workshops in Wisconsin. The group “offers hands-on, outdoor workshops held in a safe, supportive atmosphere with patient, enthusiastic instructors. No experience or special equipment is necessary.  BOW is for adult women of all ages and fitness level,” states the BOW website. Other such groups seeking to get more women and minorities involved in hunting include Pheasants Forever and the Izaak Walton League.

Over the past five years, two news laws were designed to get women and children involved in hunting. In 2017, the legislature eliminated the requirement that a child be 10 years old before they are allowed to purchase a hunting license. The law also expanded a mentored hunt where, as long as the person is within arm’s length of a mentor, they can go hunting without passing a hunting safety class. That became available for kids of any age.

Once kids reach the age of 12, they can take a hunter safety class, although ages 12 to 14 need to be close enough for voice or visual contact with an adult.

The biggest advocate for the bill to cultivate younger hunters was former Rep. Joel Kleefisch, an avid hunter, who to win votes displayed a video of his daughter at age 8 shooting and then posing with a dead wild hog and her rifle at a Michigan game preserve.

“This bill will allow responsible hunters to get kids off the couch and off the electronics and into the woods,” Kleefisch said at the time. “There’s nothing more exciting than seeing the look on someone’s face when they harvest their first animal.”

The law seemed to have an impact. After it took effect in Nov. 2017, the DNR sold 1,814 mentored hunting licenses to children nine or younger that year. While most went to 9-year-olds, 52 licenses went to children under age 5 and the youngest licensee to register having killed a deer was age 4.

And 10 hunting licenses were sold for babies under a year old to participate in a hunt with a mentor.

Blaze pink with your camo

Blaze pink fluorescent gear was made legal to wear for hunting in Wisconsin in 2015, with a bill signed into law by then-Gov. Scott Walker that was authored by Reps. Nick Milroy (D-South Range ), David Steffen (R-Green Bay) and Kleefisch.

It made Wisconsin the first state in the nation to authorize blaze pink for deer hunting. In fact, that bill caused DSG Outerwear to reach out to the legies and offered to help lobby for the bill, as they were creating a blaze pink highly visible line of clothing. It ended up getting mixed reviews.

“I think it’s really misguided,” Sarah Ingle, president of the Women’s Hunting and Sporting Association told the Milwaukee Journal Sentinel at the time. “Among the group of women I hunt with, we find it insulting and demeaning.”

Outdoor Life senior editor Natalie Krebs grew up in a family of hunters and says that when she began working for the magazine, “it snowballed into how I spend most of my time.” She writes frequently on hunting culture, sport and a deep dive on hunter recruitment.

Her gift guide for women hunters features clothing and rifles designed to fit women, but not a scrap of pink. She chuckles at the blaze pink idea, saying, “Men don’t want baby blue with their camo and women don’t really hunt so they can accessorize with pink — that’s frankly a little insulting to women.”

Key to keeping a novice hunting is to not just recruiting them, but continuing to mentor them beyond the first hunt for two to three years.

“I’ve found that really sticking with the hunters you are trying to recruit works,” says Krebs. “People feel there is so much they don’t know.”

As for women, “Just treat them like a male buddy or kid — not as a subset of that hunting culture,” advises Krebs. “There’s no need to be superficial. Women don’t want to be treated any differently.”

Bonus tip — she penned a story for people looking to get a significant other to join them in hunting and it begins, “If you’re one of those guys who hunts to escape the woman in his life, then I can’t help you. Good luck with that. If you’ve already got someone who shares your outdoor obsession, congratulations. You’re living the dream.”

Her best tip: “Treat her like the equal she is.” 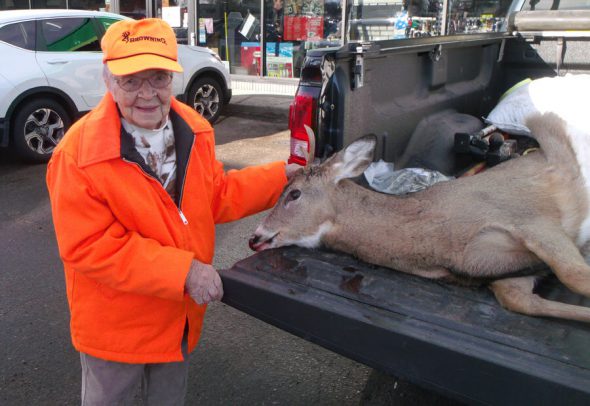 Florence Teeters stands with her first buck on her first hunt at age 104. Photo by Bill Ball/Wisconsin DNR.

Back to those Boomers who have been giving up hunting.

Maybe some of them — and women as well — might be inspired by the recent news stories about Florence Teeters.

Not only did she take out her first gun deer license ever this season at age 104, she bagged a buck on opening day on her land in Price County.

That got her kudos from DNR Secretary-designee Preston Cole: “This speaks to the adage that you should never underestimate the power of our senior citizens. After raising a family of hunters, this young lady chose this opportunity to partake in Wisconsin’s long-established tradition of deer hunting. We join the rest of Wisconsinites in celebrating her outstanding accomplishment,” he said. “This proves that Wisconsin’s gun deer hunting season is for every generation.”

Who knows, maybe the DNR will start a hunter training class just for centenarians next season.

2 thoughts on “Where Have All The Hunters Gone?”