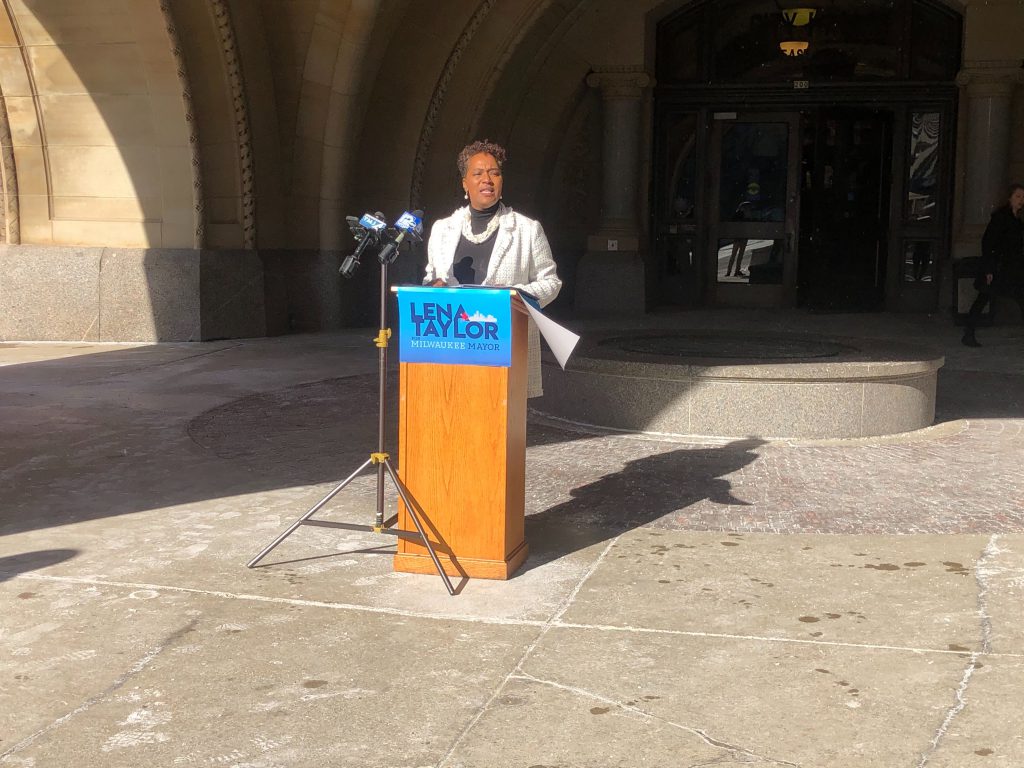 About two weeks ago Democratic state senator and mayoral candidate Lena Taylor held a press conference where she blasted Mayor Tom Barrett for the exodus of city employees, mostly police, to the suburbs. That trend began six years ago after the state passed a law ending city residency requirements in Wisconsin.

“There is no one that bears responsibility more than Tom Barrett,” Taylor charged.

As it happens, Taylor was a member of the Legislature, which passed the 2013 law ending the residency requirement, which had been on the books in Milwaukee since 1938. Which raises the question: what did she do to oppose the bill?

I remember writing about the proposed law, championed by the police and fire unions, whose members wanted to move out of the city to suburbs with lower property taxes, though the main reason for Milwaukee’s higher taxes is the high cost of police and fire fighters’ wages and benefits.

At the time, at least 127 other municipalities in the state had some form of residency requirement, but law was really aimed at Democratic cities like Milwaukee, Racine and Madison, who had the most fire and police workers — and who also had the most to lose if these workers moved out of the city. But by far the biggest impact would be on Milwaukee. Based on statistics in other big cities in the nation where the residency requirement was ended, the Barrett administration estimated that 50 percent of city employees would move to the suburbs. “I guarantee removing the residency rule will reduce property values in the city of  Milwaukee,” Barrett warned.

The foremost proponent of the proposal was Gov. Scott Walker and then-conservative talk radio host Charlie Sykes. Walker directly addressed Milwaukee, declaring that “to keep people in the city, you should have a great city.” Sykes declared this was about freedom for people to choose where to live, and compared Milwaukee to Communist East Berlin, where the Berlin Wall kept people from leaving.

For the Barrett administration, this was a life-and-death issue. Barrett, his then-chief-of-staff Pat Curley and the city’s lobbyists were doing all they could to kill the law.

But they were not alone. News accounts of that time make it clear that many spoke out against the proposal. Police Chief Edward A. Flynn and Fire Chief Mark Rohlfing and 14 of the city’s 15 Common Council members signed a letter imploring Walker to keep the law in place. That included Ald. Tony Zielinski, who is now running for mayor and who tells Urban Milwaukee “I support the residency requirement 100 percent.” Only Ald. Bob Donovan did not sign the letter.

Groups that publicly opposed the proposal included the League of Wisconsin Municipalities, the Intergovernmental Cooperation Council, which consists of the chief elected officials in Milwaukee County municipalities, and the Milwaukee Brotherhood of Firefighters, a chapter of the International Association of Black Professional Firefighters.

For Walker, this was a chance to reward the police and fire unions, who supported his bid for governor, and in the process get revenge against Barrett, who had the temerity to run against Walker in the 2012 recall election.

But the proposal was far from a slam dunk, as it would likely be opposed by all Democratic legislators and might attract some Republicans serving some of those 127 municipalities with some kind of residency rule. So Walker and Republican leaders included it in the state biennial budget bill of 2013-2015, which GOP legislators, who controlled both houses, would have to support.

Barrett led a fight to remove the proposal from the budget bill.

“This is a pure policy item” and “has nothing to do with the state budget,” he said. “Removing residency as a condition of employment serves no compelling state interest, does nothing for the state economy, does not create a single job and has absolutely no fiscal impact on the state budget…For that reason alone it should be taken out of the budget and debated on its own merits.”

Prominent Milwaukee businessman and philanthropist Sheldon Lubar sent a letter to every state legislator, asking them to take the proposal out of the budget and let local officials decide the issue.

Republican Rep. Chris Kapenga of Delafield (now a state senator) and Sen. Glenn Grothman of West Bend (now a Wisconsin congressman) joined Lubar in questioning why the provision was part of the state budget. Grothman ultimately crossed party lines to vote for a Democratic motion to remove the item from the budget.

But the motion failed, the proposal stayed in the budget, and in June 2013, the budget was passed, with Republicans voting for it and Democratic legislators opposing it. For three years after this the Barrett administration fought the law in the courts, employing the city attorney to fight it all the way up the legal system, until the Wisconsin Supreme Court, in June 2016, upheld the state law.

You will notice one person who does not appear in this narrative. I could find no story with Taylor championing the city residency rule. Checking her press releases, there is not one press release on the bill to kill the residency requirement in 2013, though she had time for a release touting her participation in a legislative exchange to Armenia.

I emailed Taylor to ask why there was no press release about the residency proposal. She responded that “this issue was not started in 2013” and “by that time I had been talking about it on social media and in the community for at least two years.”

Perhaps, but I could find no news stories quoting Taylor on this in 2012 or 2011. Nor was there any press release by her on this issue in either 2011 or 2012, though there was a release touting Taylor’s selection as a 2012 Henry Toll Fellow.

Taylor says she posted comments on Facebook opposing an end to the residency requirement, including one in 2011, one in 2012 and three in 2013. She also writes that she “Attempted to educate Milwaukee residents and raised awareness at community events, radio appearances; Met w/Dem and GOP colleagues to try to discuss why this was harmful to Milwaukee,” and in February 2013 went to a call to action at the Milwaukee cafe, Coffee Makes You Black.

Yet in 2015, when she was challenged in the Democratic primary by then Rep. Mandela Barnes, Taylor was endorsed by the Milwaukee Police Union, which helped her retain her state senate seat. Perhaps the union members hadn’t seen her Facebook posts.

2 thoughts on “Murphy’s Law: Who Lost the City Residency Rule?”