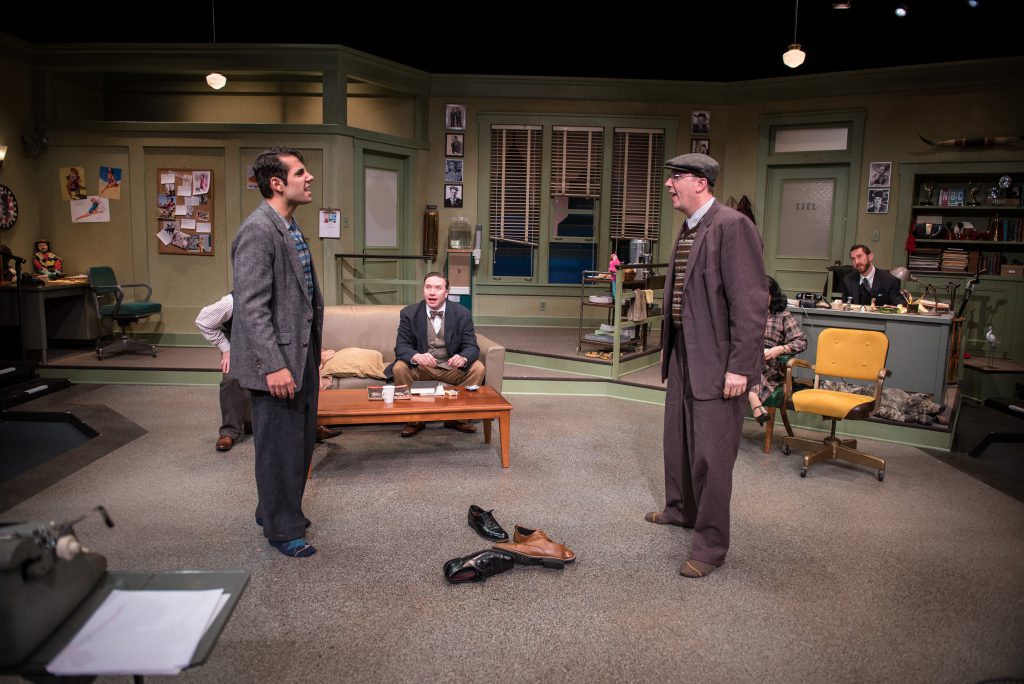 Laughter on the 23rd Floor. Photo by Ross Zentner.

You can almost hear Mel Brooks, Carl Reiner, Larry (M*A*S*H) Gelbart, Selma Diamond, Neil (Doc) Simon and other luminaries of the 1953 NBC writing room for Sid Caesar’s “Show of Shows” debating endlessly about the funniest title for a play about their madcap reign: Crazy Times at Rockefeller Center? Hysteria on High? Nuts Running the Network? Rather than collaborating, this team of rival wits would still be trying to top each other.

Fortunately for Broadway, 40 years after the reality it was Doc Simon as sole fictionalizer who created Laughter on the 23rd Floor, now a frequent commercial staple and getting revived through Dec. 15 in a sterling production by Next Act Theatre. It’s his happy and poignant memory of them all in thin disguise.

Simon (1927-2018) was the most successful playwright of the lot. By the 1990s he had deepened his gift for situational structure with a sense of nostalgia. Those talents are on rapid-fire display in a “can you top this” one-liner donnybrook and mutual appreciation society among characters whose real-life counterparts shaped America’s comedy universe. The playwright catches the individual taunts while inventing his own variations. It may not be his best play, but the quips are top-drawer and the opportunities for actors are sumptuous.

This merry re-creation sneaks up on how they fought, feared and loved their temperamental intimidating master Max Prince (Caesar fictionalized), but also how they loathed what Joe McCarthy was doing to the country and what NBC was slowly forcing them to do to the culture if they still wanted a paycheck – make it simpler, make it shorter, make it cheaper.

Director Edward Morgan provides the necessary invisible hand — we are seldom conscious of how carefully the large cast has been arranged into high speed interaction and coordination, so each actor knows when to steal the stage and when to weave in quietly. They’re on the right track and there are places to grow.

Simon has invited us into a comedy master class where we hope the one-liners never end. Yet the moral of the piece, pointing back to the dumbing-down of our society, has become too familiar. While Simon is skilled at conversational ripostes, there’s still room available for the actors to move out of bedlam back into real feelings. Pace is needed at both ends of the equation.

Doc disguised himself as the narrator and shyest writer Lucas, played by Zach Thomas Woods with warmth and a touch too much self-awareness of his function in the story. Near faultless in timing and keeping attitude alive is Dylan Bolin as the lone gentile jester in this Borscht Belt of craziness.

While Karen Estrada has to sharpen her listening reactions in between her moments in the sun, overall she is a welcome addition to the smart-aleck sweepstakes. As an acrobatic clotheshorse always trying to dominate the action, Rick Pendzich serves as secret timing sauce. As Val, the Russian worrywart, Mohammad N. Elbsat is at his funniest at his most melancholy.

As Kenny, Seth K. Hale has the difficult job of balancing truth-telling with quick wit. The bounce back and forth causes him some trouble. Similarly, despite some comic gems, Adam Qutaishat hasn’t fully integrated Ira’s constant hypochondria and mercurial purpose. Lindsay Webster has been cleverly modulated in her role as the perky secretary longing to be as funny as the natural clowns around her.

Most enjoyable are the frequent stage visits of the volcanic, brutish, absentminded king of burlesque Max Prince, played unthrottled by Next Act’s artistic director David Cecsarini.