Why Raise the Minimum Wage

The data is now overwhelming on the positive effect in states that did so.

Recently, a number of states have voted to raise their minimum wage. The federal minimum wage was last increased in 2009, when it was set at $7.25 per hour. As the chart below shows, based on data from the Congressional Budget Office, its buying power has steadily declined since 2009. $7.25 today has only the buying power of $6.30 in uninflated dollars.

Earlier this year the US House of Representatives passed H.R. 582, the Raise the Wage Act, which would have raised the minimum wage to $15 per hour in a series of steps and then indexed it to inflation. Given the present partisan divide in Congress, this bill is likely to die in the Senate.

The Congressional Budget Office (CBO) recently analyzed the Raise the Wage Act. In connection with that report, it released a tool that allows one to explore the economic effects of various minimum wage scenarios. The next few charts are based on its most aggressive scenario, in which the minimum wage would be raised to $15 per hour in a series of steps, as shown below. In addition, the minimum for workers receiving tips would be gradually raised, eventually reaching $15. 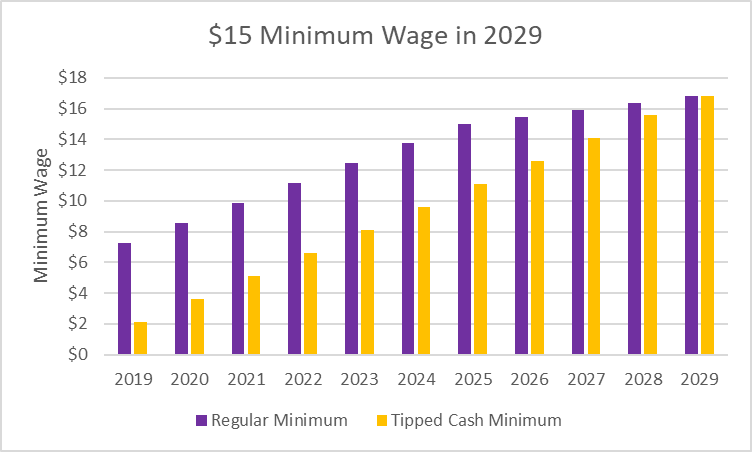 The CBO concludes that increasing the minimum wage would raise the earnings and family income of most low-wage workers, lifting some families out of poverty, as shown below in brown. It would also, in the CBO’s view, cause other, but far fewer, low-wage workers to become jobless, and their family income would fall, reflected in the green line. As a result, as shown by the purple line, the number of people in poverty would be reduced by about 1.5 million. 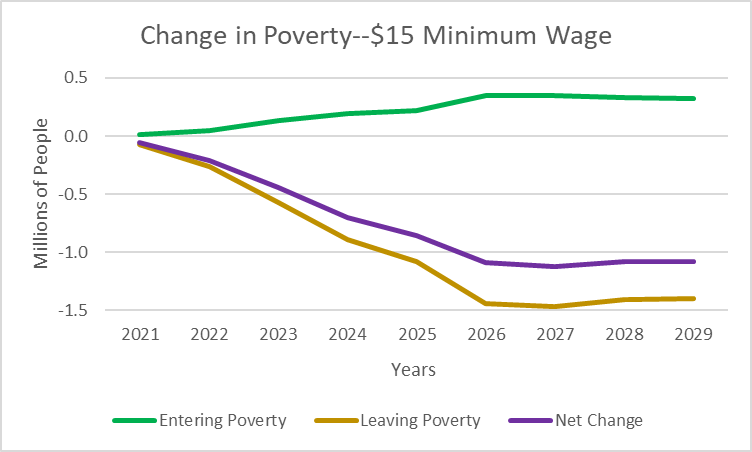 The next chart shows the CBO’s estimate of the change in family income for each of six groups of families based on their income. The six groups cover the income spectrum from smallest—those under the federal poverty threshold—to the wealthiest—at least six times the threshold. I have also included the current mean income for each group, running from $10,700 to $232,800. 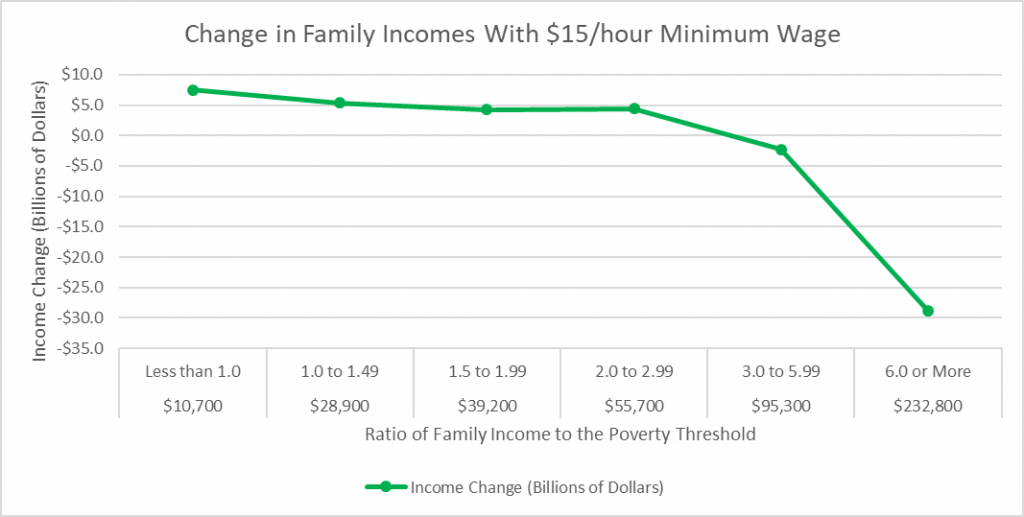 On average only the wealthiest group of families ends up with less income. This is due largely to higher prices and lower business earnings leading to reduced incomes.

The argument for raising the minimum seems strongly one-sided: it results in lower poverty on balance and does so by shifting income to poor families from those that are more prosperous.

This leaves two questions about the job losses: how large they are and what can be done to help the people, whatever their numbers, who lose their jobs?

For a long time, conventional economic dogma held that minimum wages are either bad or irrelevant. Bad if set above the point where supply and demand are in balance because, in that case, demand from employers would go down while the supply of willing workers would increase. The excess workers would push up the unemployment rate. Irrelevant if the minimum wage were set below the equilibrium price, thereby allowing the market to work.

Authors of economic textbooks loved to point out the minimum wage as an example of good intentions gone wrong. Apparently, the conclusion was so obvious that there was no need to check out the empirical evidence.

Starting in the early 1990’s, this situation rapidly changed. Well over 100 empirical studies have been published in the economic literature. Typically, they concentrate on situations where one jurisdiction—such as a state—raises its minimum wage while its neighbor does not. The recent refusal of Congress to raise the federal minimum wage has had the side effect of offering more opportunities for research as more and more states go it alone.

In a recent summary of the research for the British government, Arindrajit Dube of the University of Massachusetts concludes:

Overall the most up to date body of research from US, UK and other developed countries points to a very muted effect of minimum wages on employment, while significantly increasing the earnings of low paid workers. Importantly, this was found to be the case even for the most recent ambitious policies.

Dube goes on to suggest that that the evidence is consistent with exploring a higher post-2020 minimum of up to two-thirds of median hourly earnings. Currently, this translates into a minimum wage of just over $15.

Taking a much more anecdotal approach, a recent New York Times article compares wages and hiring in three New York counties with three neighboring counties in Pennsylvania. New York recently raised its minimum wage; Pennsylvania did not. It reported that “while the adjustment to higher labor costs has not been painless, the pay increases did not consistently come alongside weaker hiring relative to Pennsylvania’s trend.”

Overall, is there a noticeable relationship between state minimum wages and their growth in the number of jobs. The next chart is a scatter plot of the states’ minimum wages (on the horizontal) versus their quarterly job growth since 2015 on the vertical. The trend line is not statistically significant. This suggests that even if there is an effect on jobs, it will be hard to spot in the real world. 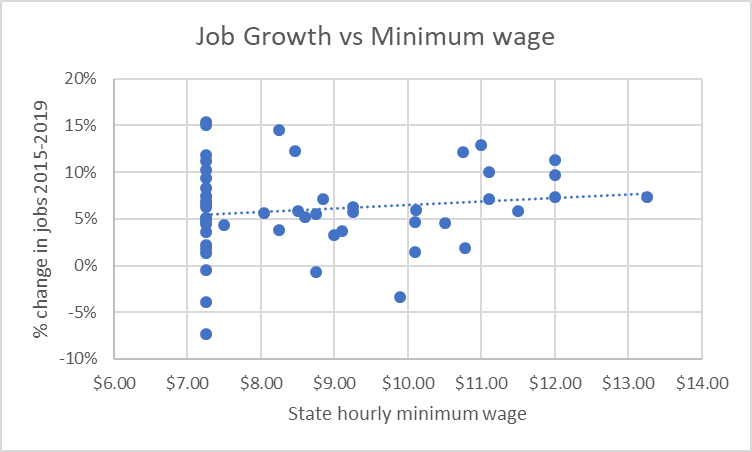 Still, however small the effect of increasing the minimum wage is on jobs, poverty and unemployment are persistent problems in the United States. It is safe to predict that poverty and joblessness will spike when the next recession comes. In his recent book, longtime Milwaukee policy wonk David Riemer recommends a number of programs to reduce poverty. These include transitional jobs, modeled on the Civilian Conservation Corps and the Work Progress Administration that the New Deal launched to counter the Great Depression.

A recent report from the Wisconsin Policy Forum notes that Milwaukee county parks have built up more than $200 million in deferred maintenance, and that is growing at the rate of $40 to $60 million per year. Thus, a program of transitional jobs could represent an opportunity to attack that backlog while assuring that everyone who wants a job can find one. What is missing is the determination to tackle our problems.

The available evidence inevitably points to the conclusion that by not raising the minimum wage, Wisconsin has poorly served its residents.