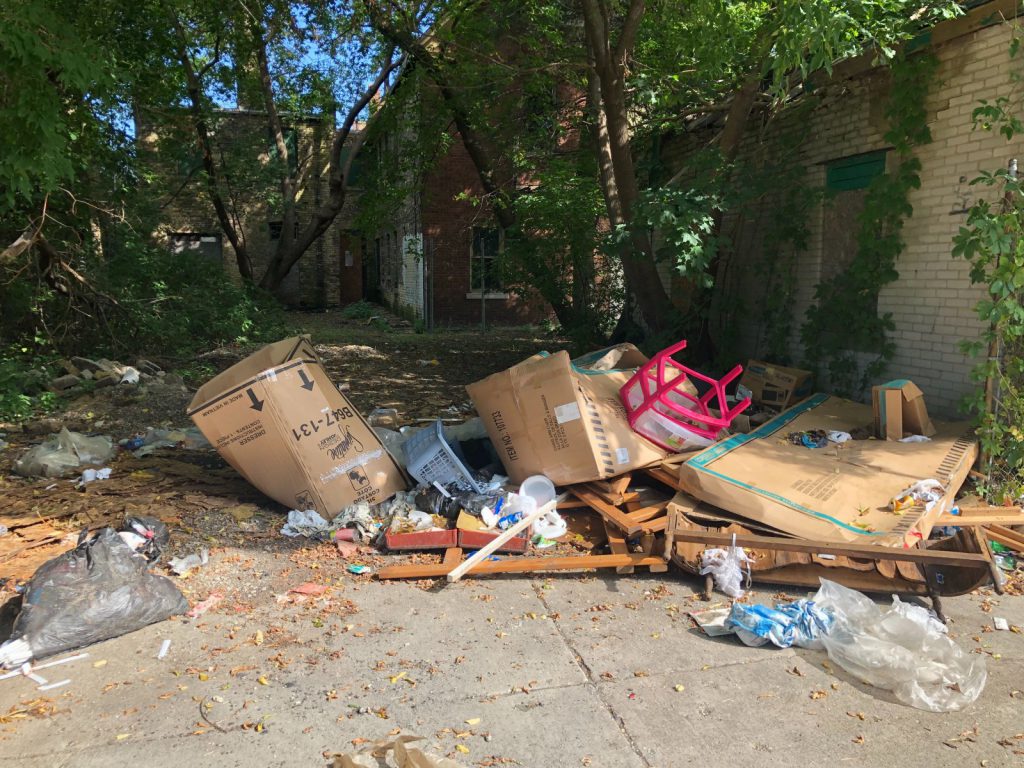 A new city webpage is drawing an increase in reports of illegal dumping.

Department of Neighborhood Services (DNS) doen’t believe the increase in reports is a sign that the problem is getting worse, and is instead a result of making it easier to report problems.

DNS launched a new anti-dumping program in the first half of 2018 located at Milwaukee.gov/dumping.

“Besides going there and seeing what our program entails, there is a link that allows members of the public to upload evidence in a timely way,” said DNS manager Don Schaewe. “That’s important because evidence goes away really fast.” Submissions can include photos, videos and witness statements.

He told the Public Safety & Health Committee on Thursday morning that the department received 111 tips in the second half of 2018 and has received 240 tips in 2019.

As a result of those tips, “we have issued 16 citations, three of which are pending right now, we have also engaged a rewards program,” said Schaewe. He said the rewards program, which has issued 13 payments totaling $12,000, hasn’t been a significant inducement because people are already passionate about stopping illegal dumping.

DNS inspector David Kagel walked the committee through how the department investigates the complaints and issues citations. “We try to respond to those within 24 hours,” said Kagel of the form submissions. “Sometimes our investigation starts immediately if we have a plate number or something we can go off of.”

He said an investigation sometimes hits a dead end and it then becomes a matter of providing empathy to the victim. “We’re sensitive to the fact that people are getting taken advantage of,” said Kagel.

He told the committee that dumping happens citywide, often in spots in alleys or under bridges where someone can be hidden for long enough to toss a couch off the back of a truck. Groups of vacant homes “tend to be a little more prevalent dumping location,” said Kagel.

Household items, including couches and mattresses, are the most commonly dumped items said Kagel. Tires are a close second, he added. Alderman Robert Bauman and others have debated instituting a bounty program to pay collectors for tires and mattresses.

Fines for dumping start at $1,500 and can rise to $5,000 under the discretion of municipal court judges and the recommendation of the City Attorney’s office.

Ald. Chantia Lewis asked about an unusual problem in her far northwest side district. “For some reason in my district, we have speed boats that get dumped,” said Lewis. The alderwoman said she’s observed the situation at least twice in her district.

Kagel and Schaewe laughed. “What’s happening there is people are finding abandoned boats and trailers in yards,” said Schaewe. The manager said the thieves are after the trailer for scrap value. The strategy? Schaewe said they tie the boat to a fixed object and drive the trailer away, with the boat dropping onto the ground.

“It’s very common on the northwest side,” said Schaewe. “I can’t make that up.” The city will lift a fiberglass boat onto a trailer if its small enough or chop it up to be hauled away.

Ald. Mark Borkowski asked about the impact of the new fees, which went into effect in early September at the city’s two drop-off centers, for dropping off large loads. Have they increased illegal dumping? “I don’t know that we can empirically state that,” said Schaewe. Kagel said part of the theory behind the change was to allow contractors to be able to drop off materials. Previously only city residents could use the drop-off centers.

Ald. Scott Spiker pushed for the department to make it easier to report illegal dumping with the city’s MKE Mobile smartphone application.