So says Gov. Evers about Capitol tree, with the added theme, “Celebrate Science.”

By Melanie Conklin, Wisconsin Examiner - Nov 8th, 2019 03:17 pm
Get a daily rundown of the top stories on Urban Milwaukee 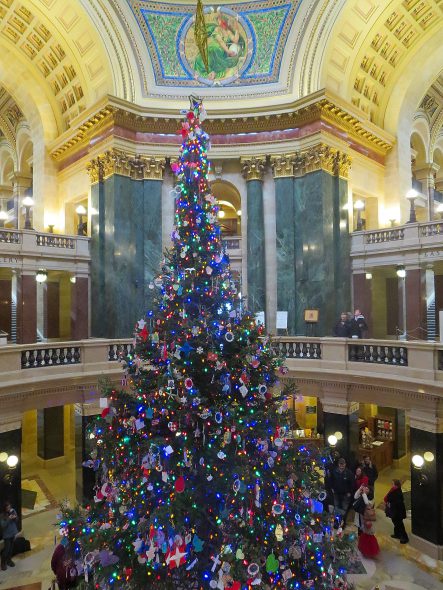 Democratic Gov. Tony Evers announced his coming tree that will grace the Capitol throughout December and in his release he referred to it as the “holiday tree.”

It’s a return to calling it a holiday tree that started in 1985, only to be axed by former Gov. Scott Walker in 2011 when he declared the evergreen would be called a Christmas tree.

Walker’s choice was denounced by the Freedom From Religion Foundation, which called the change insensitive to non-religious and non-Christian people.

In addition to the subtle name change, Evers announced this year’s theme, which will be reflected in the ornaments made by children from all over the state. The former teacher’s theme? “Celebrate Science.”

“I first began my career as a science teacher in Baraboo, so I know how important science is to the future of our state,” Evers said. “From computer science to dairy science, to clean water and natural resources, to sustainability and renewable energies, this year we want students to make holiday ornaments that celebrate what science means to them, their families, and their communities.”

The theme, too, reflects a change from Walker’s tenure. During his eight years, the State Board of Commissioners of Public Land banned its employees from discussing climate change or discussing how changes could affect the land it oversees. That has been overturned now that Democrats control all the agencies that sit on the board, including the chair, State Treasurer Sarah Godlewski.

The state Department of Natural Resources had a similar ban on the words “climate change,” which under its new leader, Secretary-designee Preston Cole, was not only lifted but become a central part of its mission.

Evers — a former science teacher — has rankled Republicans on this topic before, announcing often that “science is back” on his watch.

Climate change made headlines in Wisconsin recently when  Evers created a “Governor’s Task Force on Climate Change” on Oct. 17 with an executive order. It followed an earlier executive order creating an Office of Sustainability and Clean Energy.

“For too long we’ve been ignoring science, and frankly, we can’t afford to do it any longer. It’s time for us to deliver on the promise to our kids that we’re leaving them a better life and world than the one we inherited,” Evers said announcing the task force. “I am confident that this task force will find meaningful sustainable solutions to the climate crisis to carry our state into the future.”

This led to a dispute with Assembly Speaker Robin Vos, who said on a WisconsinEye program that Evers was playing politics and created the task force without any goal in mind.

“There’s no doubt in my mind that Gov. Evers did this for political reasons,” Vos said on the show. “There’s no real task for the task force. Like, what’s your ultimate goal? I would say I don’t know if climate change is real. I think it probably is. I have no idea why it is occurring nor do most people on the planet.”

More information on Evers’ intent and where and when children and schools should send “Celebrate Science” themed ornaments by Fri., Nov. 22, 2019 is in Evers letter to educators.

One thought on “Gasp, It’s a Holiday Tree!”