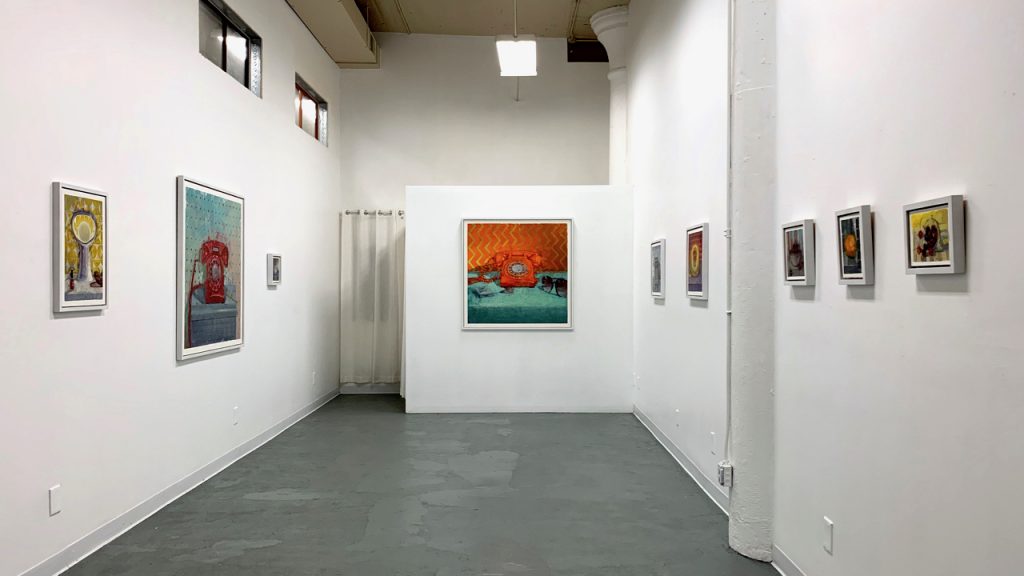 As I got into my van after leaving the show, New Works on Paper by Dale Knaak at the Frank Juarez Gallery, I heard Stevie Wonder singing on the radio, “I just called, to say, I love you”. I chuckled because almost half of the paintings on display are of rotary phones, in use when that song was originally written. There is a wistful feeling to these paintings, as though the remembered past is dissolving into a more distant memory. The intense color in this work seems to be shedding, blurring the boundary between the object and the atmosphere. This optical blur creates a dreamy atmosphere of nostalgia and sensation.

Distant phone conversations from high school popped into my head as I wandered through the show. I could feel the tug of telephone cord memories stretched to their limit, attaining privacy behind a closed door. In the paintings, the phone dials glisten in Knaak’s focused observation and are emphasized by the loose and fuzzy edges that surround the numbered and sharp center. One painting of a large orange phone, called “Last-Op Motel”, has the artist’s real childhood number painted on the clear central button. The dials are constructed in a way that is structural, the tactile paint and convincing line persuade you to visually put your fingers in the holes and dial into the surface. These paintings are made with oil paint on paper which is adhered to wood. Some are four-foot square and others are the actual size of the objects. Though on paper, they are framed without the barrier of glass. They are solid yet vulnerable like the memory of a bygone era.

At the opening reception, I overheard stories of a younger generation who had never seen a rotary phone and had no idea how to use one. A woman in her late 40’s pointed to a painted pencil laying on the table next to a red phone and said, “that is how we used to dial, with the eraser side, because of our nails.” There are paintings of other objects, too: an old fashioned pencil sharpener, a pear that floats in light brushwork, a bowl of cherries painted and drawn with inquisitive Giacometti passion. One of my favorite parts of this show was the bottom half of “Pigment Mix”, an image of the artist’s equipment for making his own paint which he used for this series. In this painting, the paint plays with the paper’s texture and the variety and color of strokes is a shadowed and reflective world unto itself. Much of this work is done with a palette knife and brayers and it is in these moments, at the edge of the paintings, that play and spontaneity seem to occur with the most ease.

And then there is the urinal. Titled, “Men’s Room”, this is my favorite painting of the show and symbolizes a sense of release. Like a Chardin still life, the urinal is lit as though from the heavens and basks in a light of gratitude. The solid, rusty-colored floor compliments the aqua-tiled wall and the symmetrical composition draws you in. The handle is made with dexterity, inventive paint handling and softness of touch created through spontaneous brushstrokes, and looks ready to flush.

When leaving, I noticed and admired the motel neon sign paintings of Krista Allenstein on the outer gallery extension. Painted on vintage maps, they are a fitting farewell pointing to new horizons for Frank and his enduring love of and contributions to the arts community. This will be the final show for the Frank Juarez Gallery, 207 E. Buffalo St. #600, which will be closing its doors on December 21st. I encourage you to enjoy the presence of this space before it too becomes a memory. 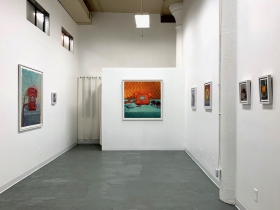 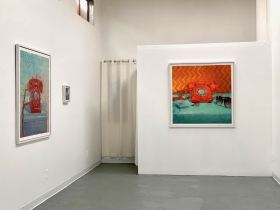 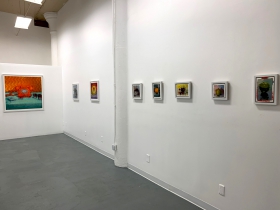 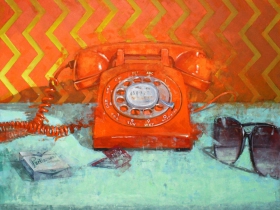 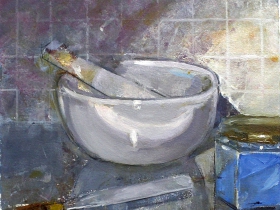 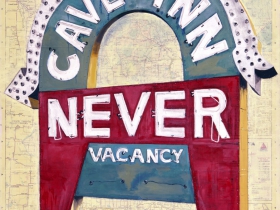 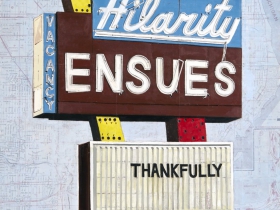