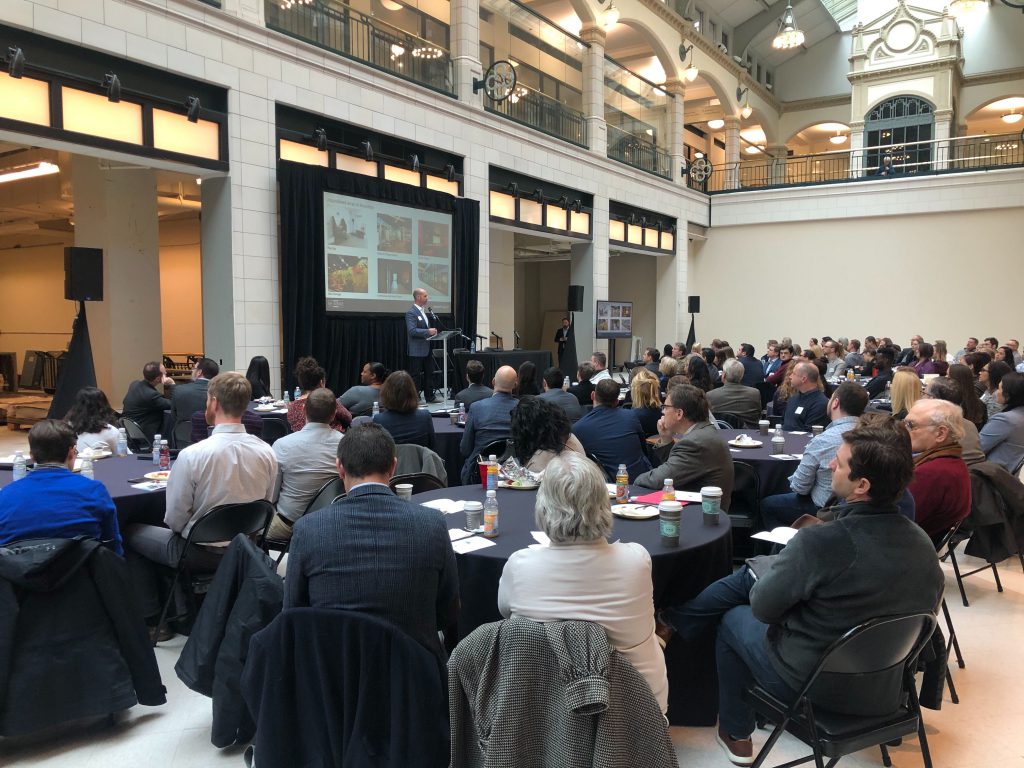 The fifth annual Empty Storefronts Conference, hosted by NEWaukee and commercial real estate association NAIOP Wisconsin, returned to where it began in 2015, the former Linens ‘n Things space in the Shops of Grand Avenue, but with an entirely different narrative about the future of the failed mall and urban retail space as a whole.

Yes, too many retail spaces are vacant and likely to remain so, as many speakers stressed, but a broad toolkit now exists to address the problem.

Tony Janowiec, who leads the local group that bought the mall months after the first conference was held, detailed Monday morning how his group has worked to find new uses for what’s now known as The Avenue, including transforming much of the Plankinton Arcade building into apartments, filling in the former food court with new floor plates for office tenants and developing a food hall on the mall’s first floor.

He noted that the solutions are working. The apartments are 93 percent leased, the $100,000 per month the mall used to lose is a worry of the past and his firm is now in a position of strength to attract compatible tenants for the residents of the apartments and office space. including the Linens ‘n Things space, on the Plankinton Arcade’s first floor.

Janowiec’s morning keynote was followed by Wisconsin Housing and Economic Development Authority CEO and Executive Director Joaquin Altoro detailing trends the statewide agency is watching, including a push towards more environmentally-friendly and urban buildings. The morning session was rounded out by a detailed discussion of how the federal Opportunity Zones program works and how communities and developers can take advantage of the program.

Breakout sessions, with speakers from Milwaukee and across North America, were held in vacant or underutilized storefronts in the Freshwater Plaza mixed-use building on S. 1st St. and W. Greenfield Ave. and in the Riverworks business improvement district. It was in those sessions that attendees learned about solutions far smaller than Janowiec’s $92 million downtown redevelopment.

Milwaukee entrepreneur Brandon Methu gave a preview of an affordable housing crowdfunding platform he’s working to develop. He told the audience he hopes to begin accepting contributions next summer and believes the idea could allow average people to make investments as small as $250 to improve blighted properties in their neighborhood.

Sue Holdsworth, Winter City manager for Edmonton, detailed the many different strategies the Canadian city has employed to embrace cold weather and build a better year-round environment for residents and businesses. Tactics she shared with attendees, many of whom represented business improvement districts from across Wisconsin, included building design guidelines optimized to reduce wind and maximize sun exposure and shared, fire department-approved heaters and open fireplaces that could be deployed for different events.

A closing panel discussion focused on the proliferation of hemp and cannabidiol (CBD) stores and the challenges and opportunities presented by them.

Before taking in happy hour at Saint Kate the Arts Hotel the approximately 150 attendees were treated to a hard hat tour to see the transformation of The Avenue.