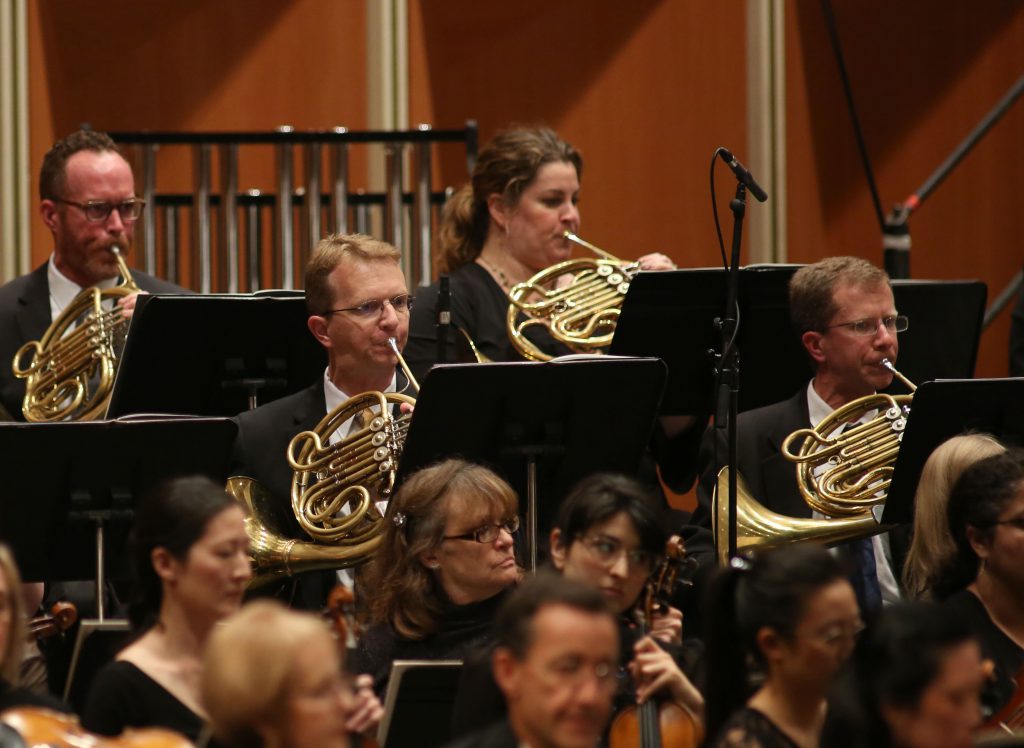 This past weekend the Milwaukee Symphony played at the Pabst Theatre due to some Marcus Center scheduling, and the historic venue was a nice fit for a program featuring Beethoven’s first two symphonies. I had never noticed this before, but the Pabst features several great artists’ names emblazoned high on the walls: Shakespeare, Michelangelo, Goethe, and yes, Beethoven. In addition, there’s a bust of Beethoven on the left side, with Beethoven’s name illuminated below. These factors, plus the ongoing Beethoven-250th-anniversary shindig that’s dominating the classical world, definitely created an atmosphere of Beethoven-mania.

After the Halloween snowfall and ensuing temperature drop, the Pabst’s heating system clanked to cantankerous life at Friday night’s concert, creating a real distraction for the first twenty minutes or so until it was turned off. (I doubt this was an issue on Saturday night’s concert.) Despite the early noise, Beethoven’s First Symphony received a very satisfying performance under the baton of Ken-David Masur. The first movement’s second subject was buoyant, moving between woodwind solos. Masur also drew attention to the details where the young Beethoven departed from Mozart, with some wind solos sneaking into orchestral tuttis and more exaggerated, drawn-out cadences than Mozart would dare. The andante had a muted elegance and a nice push and pull of imitated motives. In the minuet, where the piece started to show more of Beethoven’s promise, Masur did a great job highlighting the funky rhythmic impulses. I heard some humor in the trio section, with its relaxed mood that still leaves the violins scurrying around. The final movement, an even more Beethovenian creation, really came to life. From the mysterious, halting opening to the spirited end, Masur nailed the style. I liked how sometimes he would go completely motionless, even in the middle of orchestral action, to create the biggest possible statement with the next gesture.

Finishing out the first half was Robert Schumann’s Konzertstuck for Four Horns and Orchestra, played by MSO musicians Matthew Annin, Dietrich Hemann, Darcy Hamlin, and Josh Phillips. I know Maestro Masur is a Schumann fan, both from my interview with him and from some of his programming this season. A piece from the Romantic era felt even more suited for the Pabst, and watching a quartet of horns at the front of the stage was a novel experience. Horn is a notoriously difficult instrument to play, and even at this high level, I heard more than a handful of missed notes over the course of the performance. But it was a neat piece of programming, with some moments in the first movement that echoed Beethoven and lots of idiomatic horn writing in triplets. The horn quartet provided a nice glow of sound in the second movement Romanze, and the finale led to an exciting, crisply played coda.

Beethoven’s Second Symphony is a huge aesthetic leap from the first, with more intense musical arguments and more spacious exposition. Once again Masur mastered the style. He delineated the cool awkwardness of some gestures and the greater dynamic contrasts. The strings excelled in all the running-note passages in the first movement, and the development section had a beautiful, full sound and a level of passion that made it sound like the most important music possible. Really fine music-making all the way to the end of the movement. A gentle mood prevailed in the Larghetto until some Beethovenian storminess lurking around the corners came to the forefront. When this conflict reached its peak, the orchestra achieved some real heft. Special mention to the cellos and basses for digging in to the accented gestures throughout the movement. The scherzo came across with great energy from Beethoven’s simple motivic building blocks.

The program notes didn’t mention a funny detail about the final movement: the little explosive gestures first stated in the opening are supposedly inspired by Beethoven’s own frequent burps and farts from his gastric distress. Don’t believe it? Look it up. The finale sounded terrific, and the orchestra’s enjoyment was palpable. I heard an amazing moment where a certain dominant chord, sounded by the whole orchestra, was immediately followed by a quiet string harmony. Both of those chords were executed beautifully. I know that’s a bit vague, but sometimes it’s these small moments that show that the Milwaukee Symphony is reaching higher and higher heights.

All in all, a very promising start to Masur’s Beethoven cycle. The Pabst’s somewhat dry acoustic made the music feel scrappy, vital and alive, even a couple centuries after it was composed.