Congressman-turned-CNN commentator gets roasted for his comments, even by his new colleagues.

By Erik Gunn, Wisconsin Examiner - Nov 1st, 2019 03:57 pm
Get a daily rundown of the top stories on Urban Milwaukee 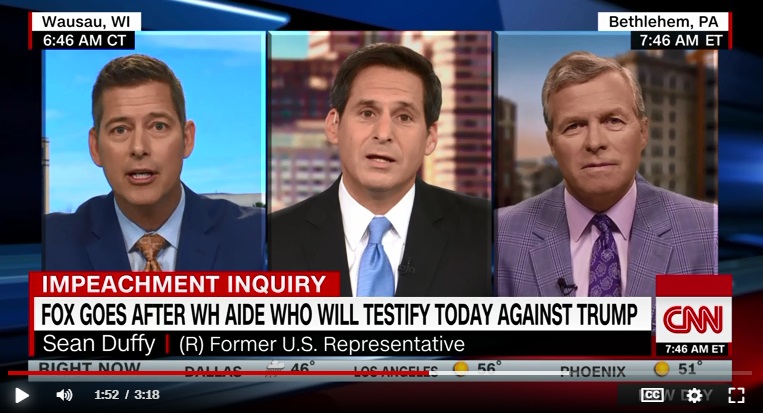 Ten days into the start of his new gig as a CNN commentator, Sean Duffy is off to a rough start.

On Oct. 20, his first day in his new role, Duffy pushed a discredited conspiracy theory in defense of President Donald Trump’s request of Ukrainian President Volodymyr Zelensky that he investigate former Vice President Joe Biden. He doubled down the next day, even though his own employer had debunked the claims.

But the former five-term congressman from Wisconsin’s 7th District, it appears, was just getting started. On Tuesday, Duffy impugned the loyalty of U.S. Army Lt. Colonel Alexander Vindman in advance of Vindman’s testimony that day at a closed-door meeting with House impeachment investigators. Vindman, a member of the White House national security staff, testified that he believed Trump “undermined national security when he appealed to Ukraine’s president to investigate his political rivals,” Politico reported.

“It seems very clear that he is incredibly concerned about Ukrainian defense,” Duffy said of Vindman on CNN. “I don’t know that he’s concerned about American policy, but his main mission was to make sure that the Ukraine got those weapons. I understand that. We all have an affinity to our homeland where we came from” — a reference to the fact that Vindman was born in the Ukraine. Vindman emigrated to the U.S. with his parents when he was three years old.

CNN news staffers pushed back hard on the air — to his face (CNN New Day co-host John Berman) and later during the day. Among the most scathing was anchor Brianna Keilar, who said in a commentary: “And, it’s an odd questioning of patriotism coming from Sean Duffy, the guy who spent part of his 20s on MTV’s The Real World and the Real World – Road Rules Challenge, while Alexander Vindman spent his years in foreign deployments, including one to Iraq where he was awarded a Purple Heart after he was injured by a roadside bomb.”

Duffy wasn’t the only rightwing commentator to push the idea that Vindman’s loyalty was suspect, Media Matters for America reported. But Duffy’s comments, because of the CNN affiliation, drew particular attention, with some calling the implication that the Jewish officer’s loyalties were divided anti-Semitic.

Coverage of the mess wasn’t limited to liberal publications. The Hollywood Reporter, the Daily Beast and the journalism-training establishment The Poynter Institute all weighed in. By nightfall that day, Politico had published a story headlined, “CNN defends new contributor Sean Duffy while anchors decry his ‘anti-immigrant bigotry.’”

Even former Milwaukee rightwing talk show host Charlie Sykes, now founder and editor-at-large for the anti-Trump conservative website The Bulwark, cheekily suggested that Duffy had done the country a favor by inadvertently forcing even some Republicans to condemn the former congressman’s assessment and stand up for Vindman: “By the end of the day, thanks in part to Duffy, much of the GOP had publicly vouched for the veracity of a witness who may deliver some of the most damaging testimony against Trump at his impeachment trial,” Sykes wrote Wednesday morning.

CNN vice president Rebecca Kutler told Politico the network hired Duffy to “share with our audience what’s important to the voters he’s represented and how that will impact the 2020 election.”

Duffy, who joined CNN after he gave up his seat more than a year before the 2020 elections, is just one of many commentators hired by cable news networks to provide perspectives on the news.

“That’s something that’s really been a part of cable news since it moved toward the opinion model, the analysis model,” points out Michael Mirer, a visiting assistant professor in Journalism, Advertising, and Media Studies at the University of Wisconsin-Milwaukee whose research interests include political communication, as well as sports journalism.

The episode illustrates the difficulties facing hired commentators like Duffy whose role is to defend a president facing impeachment over acts that even Trump has essentially admitted to doing.

But it also shows the flaw in the model as it is often practiced, he suggests.

“It’s not clear to me the value of having partisans on cable news to analyze things,” Mirer says. “Having people on who have a particular political bent is fine as long as they are able to analyze rather than advocate. Sean Duffy was in Congress. He has expertise in that. I would like to hear him bring his expertise to bear on these issues.

“I don’t know what the value is of just hearing recitations of left- and right- wing talking points,” he continues. “What contributors can add is the sum total of their expertise of being inside. A better approach is not to be seen as running interference for one candidate or another. That’s where Duffy gets in trouble.”