‘Hamilton’ Was Worth the Wait

Touring show that’s arrived in Milwaukee is a fantastic production of a must-see show. 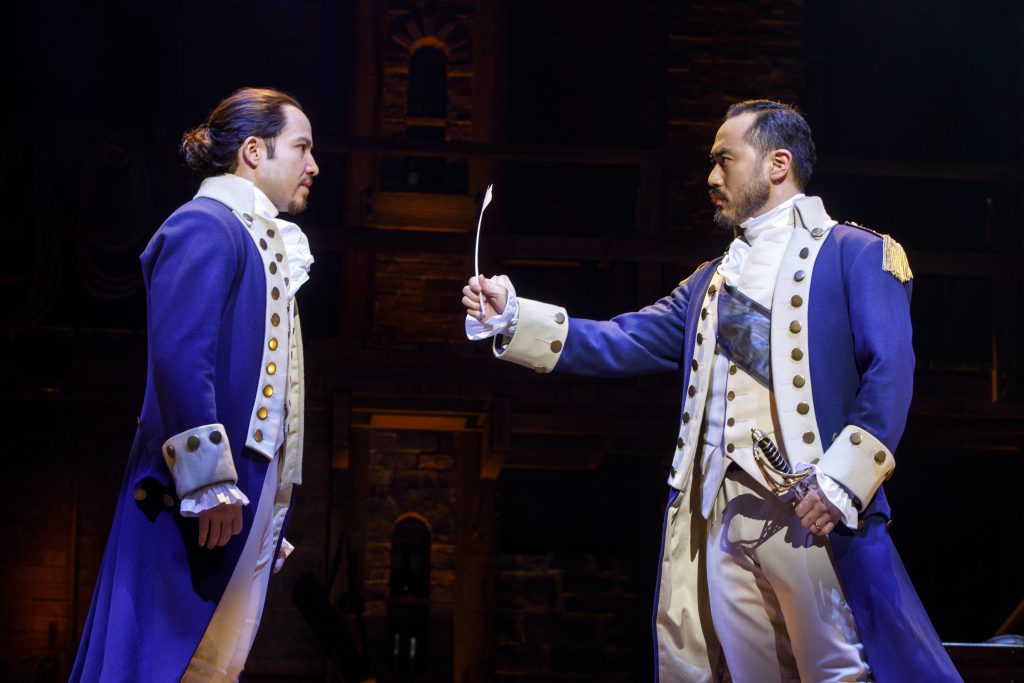 Hamilton, the most famous and accomplished ground-breaking musical of the decade, has taken residence in Milwaukee through Nov. 17 at the Marcus Performing Arts Center’s Uihlein Hall, with $100 tickets and a long-odds $10 lottery for tickets. Yet the central questions for this second national touring company are quite simple. Does it re-create the Hamilton experience that continues to wow Broadway? And is it good enough to command this sort of attention?

Unequivocally yes. Even better in some aspects. David Korins’ set has been reconfigured for touring, with ladders that descend in tempo and the revolving turntable where emotions and thrusting heartache glide past each other, with Andy Blankenbuehler’s choreography that thrusts muscles up and twirls bodies down, knitting into ensembles out of nowhere, with costume magic for Paul Tazewell’s original creations, with lighting by Howell Binkley that serves as percussion and emotional punch. Director Thomas Kail not only uses the lights much like he does the modernistic invisible orchestra, he creates a wallop out of constantly moving bodies for every story and song climax.

These fabulous technological elements are itemized to make a point. On tour this Hamilton will remain astounding for another 20 years – and then other directors and casts itching to take apart this perfect engine will re-interpret Hamilton, daring to tamper with creator Lin-Manuel Miranda’s vision, the way he added genius and knowledge of musical history to his workshops in 2014 and 2015.

It always happens to great musicals. Right now it is enough to lean forward and marvel, but around the bend Hamilton will prove sturdy enough of  spine and reflective enough in emotional power to absorb fresh colorations, particularly with how the human stories of young Revolutionary rebels and the heady mix of love, politics and rivalry unfold inside a rap-infused context.

Its uniqueness will take audiences and other artists years to catch up. We forget how anachronistic it still is to see our Founding Fathers’ garb fit so perfectly for hip-hop foppery and muscularity, to hear R&B harmony compete with rap phrasing and even stray into gospel singing when George Washington (here sung powerfully by Marcus Choi) gives his farewell address.

Miranda has stirred our nation’s roots in a magical cauldron, dashing through accurate history with inaccurate juxtapositions of styles and snappy conversations. His cleverness is still being absorbed because his thirty-odd song creations not only bend back on each other but incorporate a lot of styles and tempos that audiences have yet to fully grasp. And yet the hearts of the dilemmas are all too human.

I suspect that many in the audience memorized the high-speed interlocking lyrics beneath “My Shot,” “The Room Where It Happens” and “You’ll Be Back” (King George’s famous da da dat dat da ya da taunt, a music hall highlight delivered by Neil Haskell), since they are all over the Internet. But trying to keep up with the words at Uihlein Hall will disappoint, because few if any can take them all in on one serving. What the stage gives you that the music alone can’t is the emotional depth, the individualistic personalities. Miranda has created well – and not just in the music. It is also in his manner of telling the story of Hamilton’s impulse to succeed and the destructive motors that drive him. The historical story has its playful side. The people engaged in the history develop their own life forces.

As Hamilton, Joseph Morales has learned a lot from the role’s originator (Miranda) but adds a more powerful vocalese and a touch more of the lost boy quality. As his nemesis and shadow Aaron Burr, Nik Walker provides a strong performance that is much more than an echo of the role’s originator, less of a coiled spring and more a mocking stalker. Many in the cast impressed me for how well they have melded their performing selves with the roles.

But I was particularly taken with the Schuyler sisters. One (Eliza) is Hamilton’s wife and the older sister is Angelica, his worshipping muse. There is a third sister and the actress playing her, Nyla Sostre, also plays another role, of Hamilton’s mistress Maria Reynolds, which she handles with powerful singing. All three parts suggest how Miranda is no Johnny one note in composing. While rap and hip-hop, interlaced with rhythms, have become the most famous Hamilton sound, the women have some extraordinary blending and counterpoints, achieving a different feeling in the middle of the hip-hop overlay. As Eliza, Erin Clemons has the radiant lyrical heft, and as Angelica, Ta’rea Campbell must dominate and literally silence the stage. Both bring glorious theatrical voices to the task, even acknowledging that the miking for the show is superb.

I’m sure Uihlein is not the largest hall the tour will play, but if you are more than 20 rows back, I would suggest investing $4 in opera glasses. While there is something marvelous about taking in the whole stage as the large cast enters and fades away, there are moments worthy of getting up close. Such as the rap duels between Hamilton and Thomas Jefferson (Warren Egypt Franklin, who struts and preens like an escapee from a Prince music video). Or the moments of romance and tragic hatred between Hamilton and his wife.

No question. Hamilton is written to be too much to absorb in one sitting. But my, what a marvelous sitting! 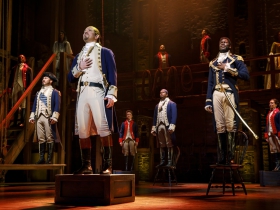 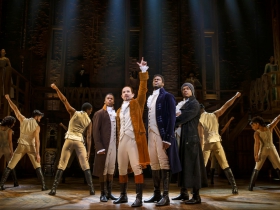 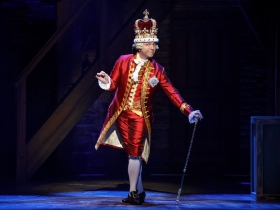 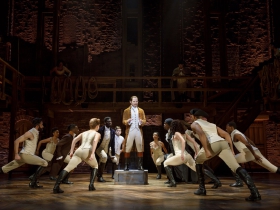 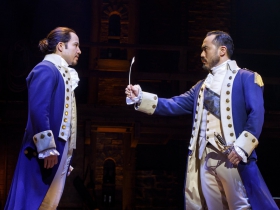 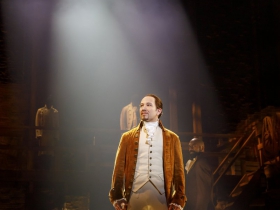