Mayor signs legislation into law making it a holiday for city of Milwaukee. 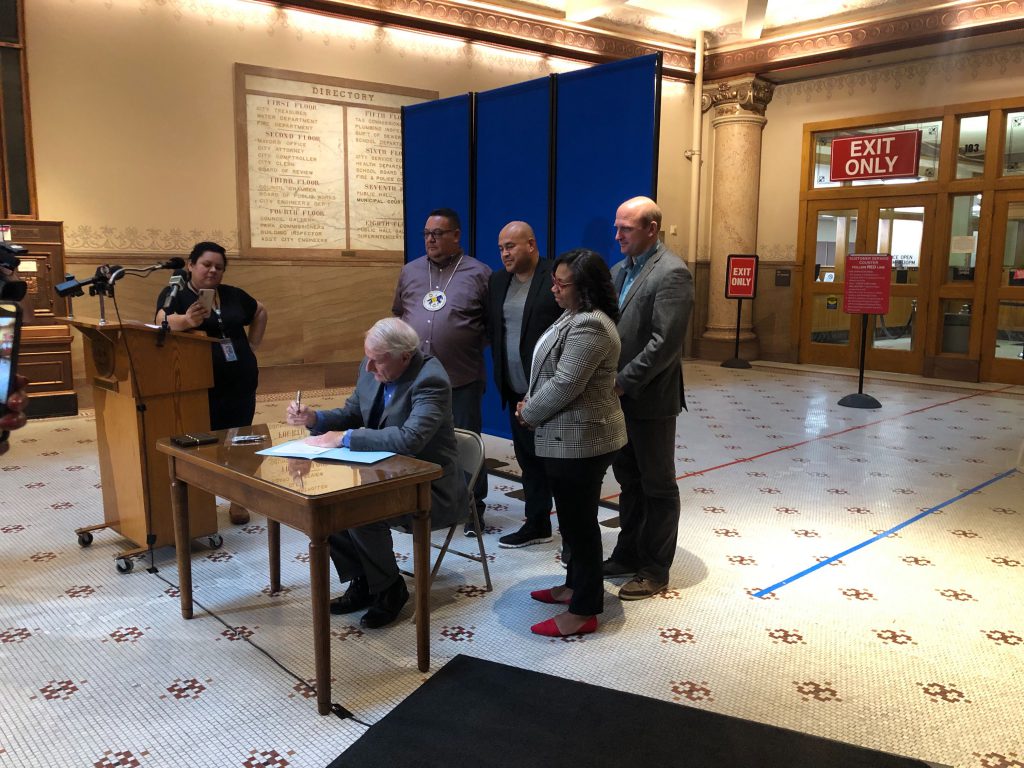 Mayor Barrett signs legislation that makes Indigenous People’s Day a holiday in the City of Milwaukee. Photo by Jeramey Jannene.

The second Monday in October is now Indigenous Peoples’ Day in the city of Milwaukee.

The change, signed into law by Mayor Tom Barrett on Wednesday afternoon, mirrors similar changes approved by Milwaukee County and the State of Wisconsin through an executive order from Governor Tony Evers.

“We know that he sailed the ocean blue in 1492,” said the legislation’s author, Alderwoman Chantia Lewis of Christopher Columbus during a council floor debate last week. “But what they fail to tell us is he didn’t land on an empty island, he landed in a community in a sense that was already populated and unfortunately decided to take over that space and commit genocide.” On Wednesday she said she is happy that the truth is now being recognized.

He praised the city officials for making the change and said the Ho Chunk’s historic connection to Milwaukee remains strong. “Thank you for this honor,” said Brinegar.

“We believe that it is all races and all nationalities that create the mosaic that is Milwaukee,” said Barrett. He noted that the three council members, each of a different race, reflect that.

The measure was opposed before the full council by Robert Donovan. Ald. Mark Borkowski said he was conflicted on the measure and abstained from voting on it.

“Christopher Columbus was labeled as a perpetrator of genocide, and while we can certainly disagree on our facts, I challenge that. I feel compelled as a Catholic to stand up for this man’s faith which was an exceedingly important aspect of his life,” responded Donovan. “I am not aware of him ever being personally linked to genocide, linked to slavery either.”

“I have absolutely no problem recognizing the struggles of our indigenous peoples. I am not prepared to do it at the expense of other groups or people like Christopher Columbus,” concluded Donovan.