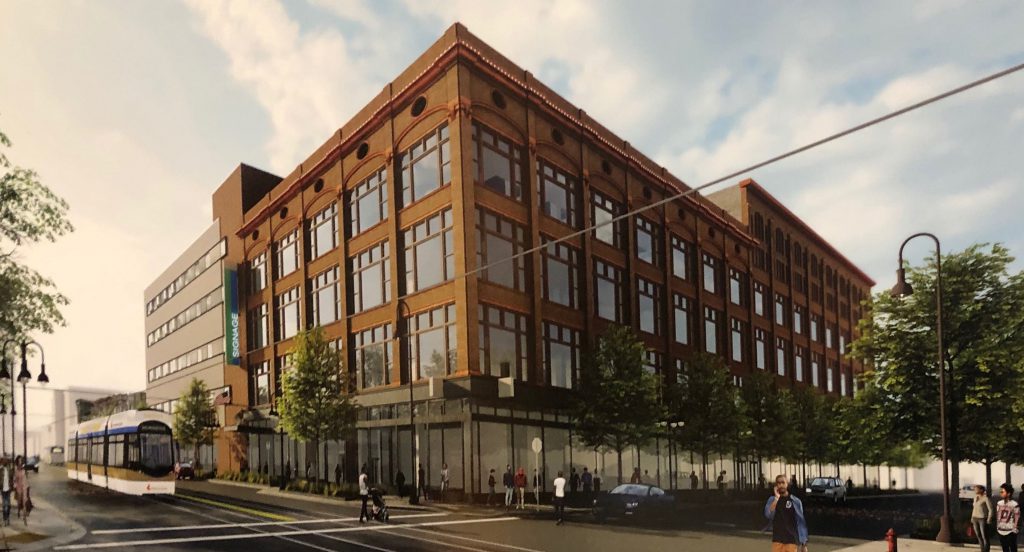 Royal Capital Group is redeveloping the approximately 400,000-square-foot complex at 2153 N. Martin Luther King Jr. Dr. as a home for both the Medical College of Wisconsin‘s community-facing programs and the Greater Milwaukee Foundation. In addition, a total of 77 apartments, a mix of affordable and market-rate apartments, would be developed on the western portion of the complex along N. Vel R. Phillips Ave.

“It’s probably one of the biggest transformations of a building that you’ll see in the city from start to finish,” said Department of City Development economic development specialist Dan Casanova. “If you’ve lived in Milwaukee for a number of years, you probably go by and forget that it’s there.” The building’s 112-year-old facade has been covered by metal panels for decades.

The board of the Redevelopment Authority of the City of Milwaukee unanimously approved an up to $15 million developer-financed tax-incremental financing (TIF) district. The funds, effectively a property tax rebate, would be used to partially close a financing gap in the complicated project.

“We are not subsidizing the rent for the Medical College or Greater Milwaukee Foundation,” said Casanova. “They are paying market rents, really closer to downtown rents.” The space occupied by the non-profits would be fully taxable, and a payment-in-leu-of-taxes clause in the city agreement would require those payments to continue if a tax-exempt non-profit acquires the building.

In addition to the TIF, the project would be subsidized by low-income housing tax credits and historic preservation tax credits.

A community space is planned for the first floor of the entire complex. Uses for that space are still being defined based on community feedback.

“I think they’ve done more outreach to the neighborhoods than any project I’ve been involved in,” said Casanova.

Architect Tom Joy of Engberg Anderson Architects and Royal Capital development manager Terrell Walter explained to the commissioners how the complex would be laid out.

“This building is going to be split vertically essentially,” said Walter. MCW would occupy floors two and three on the eastern side, with the GMF on the fourth floor and the shorter fifth floor reserved for expansion space.

The apartments would be on the western half, with a new light well inserted into the middle of the building to allow interior units to have natural light. A community room would be constructed atop one of the four-story portions of the complex. Parking for the residential units would be located in the building’s lower level.

A 315-stall, five-and-a-half level parking structure would be constructed at the southwest corner of the lot. “The main goal here is not to compete with the historic building,” said Joy. Despite having more levels, the garage would be shorter than the building.

The TIF’s term sheet currently calls for $12.6 million to be provided by the city based upon property tax payments. That amount could grow to $15 million if the building’s assessment comes in higher than $45 million. Casanova told the board that a higher assessment would cause a cashflow gap and the deal is being constructed to provide protection for the developer and private lenders. If the building does not meet its assessment goal the developer would not receive the full $12.6 million.

In response to a question from commissioner Bill Schwartz, Walter said that MCW would relocate its community-facing programs from Wauwatosa as well as the college’s east side office on N. Summit Ave. GMF would relocate from Schlitz Park.

“We couldn’t be more pleased to have Kevin Newell and Royal Capital and his team on this project,” said Marcoux. He noted that Newell being a person of color willing to take on the complicated project when many others had passed was significant.

The building was built in 1907 as a home for Schuster’s and expanded many times. Gimbels acquired Schuster’s in 1961 and operated the store until 1969. It was used as a warehouse by Gimbels until 1992 according to city records. It was then acquired by CH Coakley & Co. which has used the building for storage and office space. Many of the former department store fixtures, including escalators, can still be found in the building.

Included in the deal is a warehouse located across the street from the building at 2212-2228 N. Vel R. Phillips Ave. Royal Capital would redevelop that property as a “wellness” facility according to a site plan shown to the board.

The project will next be reviewed by the Common Council.

For more on the proposal see our coverage from October 4th.

Could This Be Used For the Streetcar?

Marcoux made a point in his remarks to note that the TIF does not have the potential to be used to expand The Hop up King Drive. The city has relied on surplus tax revenue in TIF districts to fund the infrastructure costs of extending the streetcar. Incremental property tax revenue in TIF districts can be spent on public infrastructure within a half mile of the district.

“It demonstrates the significant challenges we have in moving north and moving west in the streetcar line,” said Marcoux. “There is nothing left over to fund the streetcar.”

“These projects are going to take and consume all of the value they make,” said Marcoux. The Schuster’s project is scheduled to pay off after 25 years, with TIF districts having a maximum legal life of 27 years.

The Common Council continues to hold a proposal to expand the streetcar system north to Westown and Fiserv Forum as well as south through the Historic Third Ward to the north edge of Walker’s Point.

More about the Schuster's redevelopment