By Isiah Holmes, Wisconsin Examiner - Oct 14th, 2019 01:47 pm
Get a daily rundown of the top stories on Urban Milwaukee 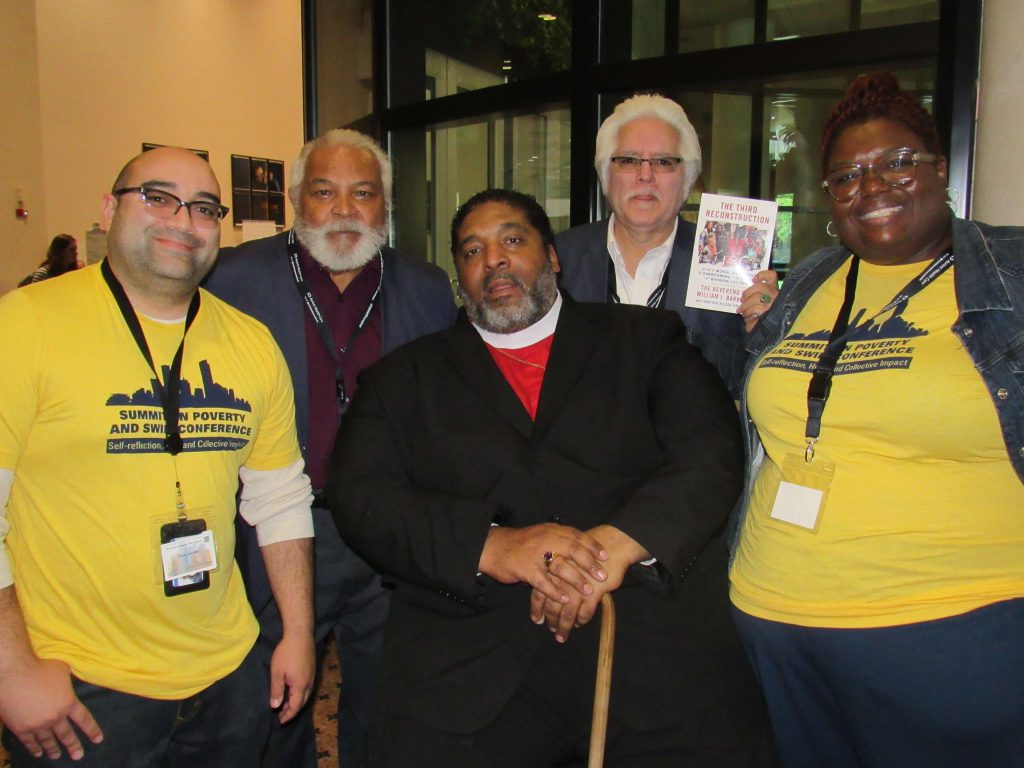 “Wisconsin is one of those states that’s critical for talking about poverty,” Rev. William Barber told Wisconsin Examiner, shortly before taking the stage at the 2019 Summit On Poverty and SWIM (Scaling Wellness In Milwaukee) Conference last Tuesday.

“Normally we racialize poverty,” Barber explained. In Wisconsin, where there are more poor whites than poor African Americans, the common plight of these two groups, and the united movement they ought to be building, should be clear, according to Barber. “What I mean by that is, 61% of all African Americans are poor and low wealth — that should be talked about as a part of systemic racism. But in raw numbers that’s 26 million people; 30%-plus of white people are in poverty or low wealth but that’s 66 million people.”

Barber is focused on returning disenfranchised people to the voting booths. He is currently conducting a national tour as part of the movement dubbed We Must Do M.O.R.E (Mobilizing, Organizing, Registering, Educating). Launched on September 18, the tour has already come to four cities including El Paso, Texas, Greenville, N.C., and Portland, Maine, with a total of 25 on the list between 2019 and 2020. Milwaukee is the only Wisconsin stop on the tour, with an event scheduled in April 2020. The tour is part of a national effort led by the group Repairers Of The Breach, also associated with the reverend.

Barber is a founder of the Moral Mondays movement in his home state of North Carolina, which held mass protests every Monday outside the Capitol starting in 2013, to call attention to changes to voting rights and cuts to social benefits and other acts by the Republican-controlled legislature that the movement deemed immoral. Barber has also been instrumental in revitalizing the Poor People’s Campaign.

We Must Do M.O.R.E is calling on the U.S. government to create what Barber calls a “Moral and Poverty Justice Budget.”

“People say there’s scarcity,” said Barber in a skeptical tone. He noted that the wealthiest Americans enjoy numerous tax advantages and thus have excess income which he believes should be distributed to less wealthy citizens, for the sake of the country.

The current national tour will end in a massive Poor People’s Assembly march on Washington on June 20, 2020.

“We now have 43 state coordinating committees, 120 partners, over 15 religious groups and denominations that are not only doing this tour, but pushing us towards this massive march on Washington next year,” Barber said.

The Summit On Poverty SWIM Conference attracted an array of voices from the social justice movement. Abra Fortson, director of the Summit On Poverty, told Wisconsin Examiner that the 2019 meetings appeared to be the largest to date. Barber was among the speakers who addressed an audience of about 200 during the two-day event.

“We have to deal with the reality of systemic poverty in this country and the connecting, interlocking injustices,” Barber said. “There are 43 million people living in poverty in the wealthiest country,” he added, citing a Columbia University study. “That’s nearly half of the people. In this state, it’s over 2 million.” Barber was keen to point out that, “over 1.2 million of them are white.” Too often, only black and brown communities are portrayed as struggling with poverty, he said.

The factors driving poverty are much more significant than the growing racial divides the country is experiencing, Barber said. “Over 400,000 people in this state are without health insurance. There are over 1.2 million people in this state who work every day and they don’t make a living wage. There’s not a county in this country where a person can work a minimum wage job and afford a two-bedroom house. And many people are $300-$400 away from a major poverty issue in their lives.”

Barber said that with numbers like those, it’s wrong to focus only on the middle class. Systemic poverty is at the nexus of so many social problems. “Systemic poverty is connected to systemic racism,” Barber told Wisconsin Examiner, “ecological devastation, destruction of the climate, the war economy where we’re putting more money into war machinery than we are into addressing the domestic needs of poverty.”

He also condemns the “false narrative of religious nationalism” which has proliferated over the last decade. It’s a political atmosphere in which, “if you’re against gay people, against women’s rights to choose, and for guns, and for tax cuts, and for waving the flag, somehow that’s a moral position. That it’s a religious, or godly position. It doesn’t even line up with our Constitution.” Barber said the purpose of We Must Do M.O.R.E. is to bring people together to overcome poverty. “We cannot be silent anymore,” the reverend declared.

Then there are people who have lost their right to vote after spending time behind bars. “That undermines our democracy,” said Barber. Some 65,000 people in Wisconsin cannot vote because of probation or parole status. Bills and resolutions are being introduced on the state and local levels to reverse this problem.

During his travels, Barber has encountered coalitions among evangelical Christians, Muslims, Hindus, Sikhs, Unitarians and secular groups. He urges a move away from religious nationalism, and toward a universal moral center shared by everyone. “There’s never been a major transformational change in this country that did not have some moral center,” he told Wisconsin Examiner.

Barber passionately proclaimed, “you cannot have a democracy where 43% of all your people are in poverty, in the richest nation in the world, and be OK with that. You cannot have a state like Wisconsin, where over 2 million people live every day in poverty amidst all of the wealth.”

One thought on “Rev. Barber’s Campaign Comes to Town”