UW System students would face suspensions or expulsions for violations, if rules approved

By Rich Kremer, Wisconsin Public Radio - Oct 11th, 2019 02:52 pm
Get a daily rundown of the top stories on Urban Milwaukee 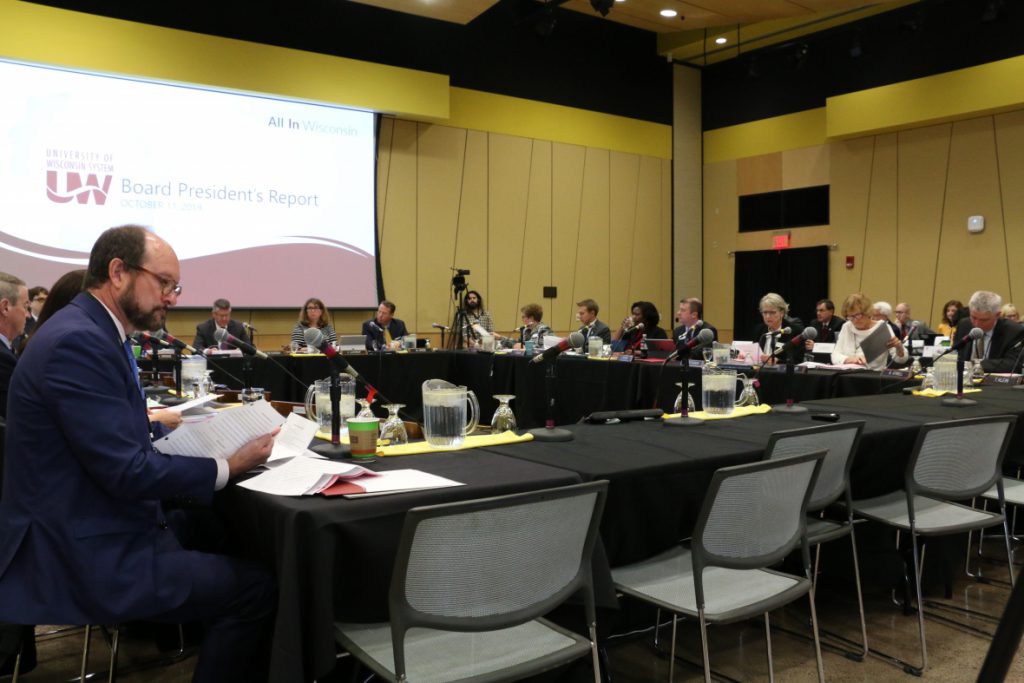 The University of Wisconsin Board of Regents met Thursday, Oct. 10 and Friday, Oct. 11 at UW-Superior’s Yellowjacket Union student center. Photo by Rich Kremer/WPR.

The University of Wisconsin Board of Regents has approved the scope of proposed new rules aimed at punishing students who disrupt free speech on campus.

The Friday vote was largely procedural in nature. It allows the UW System to work on what is called a “scope statement” that sets punishments for students caught repeatedly disrupting the free speech or freedom of expression of campus speakers or fellow students. Under the proposed language a student disrupting free speech on two occasions would have to be suspended. If there was another disruption from the student they would face mandatory expulsion.

The board and UW System have been working on the policy since 2017. The regent’s policy on “Commitment to Academic Freedom and Freedom of Expression” was introduced shortly after state Republican lawmakers introduced legislation with similar provisions. Before the matter was put to a vote Regents President Drew Petersen announced support for moving the process forward.

“To adhere to the state’s procedural requirements as president of the board I’ll be supporting this item,” said Petersen.

Regents on Friday approved moving the proposed mandatory punishments to the next step of the state’s administrative rulemaking process by a voice vote. Regents Edmund Manydeeds III, and Carolyn Stanford Taylor voted in opposition, according to Petersen.

Manydeeds was recently reappointed to the board by Gov. Tony Evers. Tiedeman was appointed by former Gov. Scott Walker. Stanford Taylor serves as an ex officio member due to her position as Wisconsin’s state schools superintendent.

Before the vote, Manydeeds told the board he couldn’t support the mandatory punishments for students disrupting free speech because, as an attorney, he took an oath to uphold the United States Constitution.

“I just think it’s a very hard road to go down to police, to punish people that may be young that may be saying things they have a right to say that they may be punished for and may follow them the rest of their lives in a negative way,” said Manydeeds.

He also questioned the timing of a preliminary public hearing on the proposed student sanctions, which happened this August when many students were off campus.

In an interview with WPR after his no-vote, Manydeeds was guarded when asked if punishing students who disrupt speakers they disagree with would be unconstitutional.

“When you start trying to legislate what is free speech and what is impinging on it I think it opens up a hornets nest of issues that I don’t know we’re prepared to deal with,” said Manydeeds.

According to UW officials there will be two more votes on the “scope statement” before the administrative rule changes go to Evers and the state Legislature.