By Ruth Conniff, Wisconsin Examiner - Oct 7th, 2019 02:07 pm
Get a daily rundown of the top stories on Urban Milwaukee 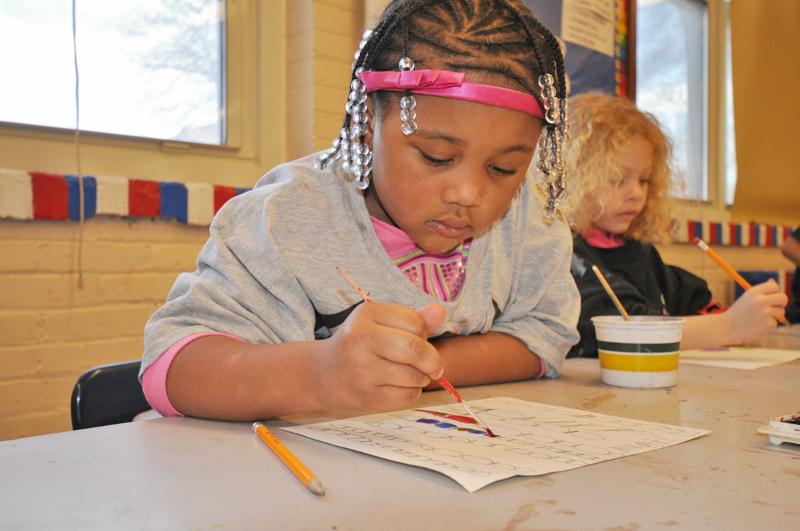 In a rare display of bipartisan agreement, the Senate and Assembly education committees held a joint meeting on Thursday, Oct 3, to take up a series of bills including an expansion of 4-year-old kindergarten that has the support of a lot of people who rarely find common ground, from School Choice Wisconsin to the Milwaukee Public Schools.

“If you look at what we’ve done in the State of Wisconsin… we really have realized how important K-12 education is, and especially early childhood,” said Senate Education Committee Chair Luther Olsen (R-Ripon), noting Wisconsin’s proud history as the birthplace of kindergarten.

“It’s great to see so many different legislators and groups in strong support of early childhood education,” said Chris Thiel, the Milwaukee Public Schools government relations specialist, taking a break to stand in the hall after watching testimony on the package of education bills that stretched from 9 am into the afternoon.

“With so many students in poverty coming into school not as prepared as others, the early years of development are critical,” agreed Jim Bender of School Choice Wisconsin. “So, for those schools with existing programs they feel a more robust 4K program will help the students climb the academic ladder.”

Apart from a comment during the hearing by Rep. Chuck Wichgers (R-Muskego) to the effect that children are better off at home with their mothers, nearly everyone who spoke at the daylong hearing seemed to agree that the state should invest in high-quality early-childhood education.

Olsen has also introduced a bill that would lower the age at which children could enter 4-year-old kindergarten. Children with October birthdays are “missing out on a year,” Olsen explained during the hearing. “That’s why we’re looking at 3 years 8 months. The goal is to be able to start at 4.”

The strongest pushback came from members of the Wisconsin Childcare Administrators Association, who testified that losing 4-year-olds to the public schools could bankrupt their programs, causing private day care centers around the state to go out of business and leaving infants and toddlers stranded.

“We rely on the 3- and 4-year-olds to carry the expense for us,” Linda Kudrna, a child care provider from Cottage Grove, testified, explaining that the high cost of caring for infants is offset by the older childrens’ tuition.

Kudrna also objected to the idea of putting very young children in an academic classroom setting, saying young children need “snuggly, homelike spaces,” and “not a big old building” full of older kids and “bullies outside.”

“Our work is so different from what the school district does,” Kudrna added. “You don’t get it…young children’s needs are very different.”

Peggy Haack of the Wisconsin Early Childhood Association testified that her group opposes Olsen’s bill to lower the age of children in 4K “mostly because we don’t think we can guarantee an age-appropriate setting.” She also urged the state to consider the needs of zero-to-3-year-olds in making decisions about 4K, and to mandate that private providers be able to take part in the 4K program through a “mixed delivery system” that would allow daycare centers to benefit from public funding for 4K.

“I do want public investment in early childhood education, but seriously, zero-to-3 is where we should be focusing our attention right now,” Haack testified.

Despite disagreements on age and the structure of the program, the idea of investing in young children was nearly unanimous at the hearing, reflecting movement on the issue, particularly among Republicans.

Rep. Kitchens and Sen. Olsen both took part in the Blue Ribbon Commission on School Funding, which came up with some of the proposals contained in the current batch of bills.

Olsen also took part in the research that led to a report by the National Conference of State Legislatures titled “No Time to Lose: How to Build a World Class Education System State by State.” The report urges the United States to adopt best practices from other countries (some of which Olsen visited). These include “a strong early education system, a reimagined and professionalized teacher workforce, robust career and technical education programs, and a comprehensive, aligned system of education.”

Assembly Speaker Robin Vos became president of the NCSL in 2019.

And, as if that were not enough, Senate Majority Leader Scott Fitzgerald (R-Watertown) represents the very town where kindergarten was born.

If ever there were an issue that seemed destined for quick, bipartisan action on the floor, expanding 4-year-old kindergarten would be it.

But some advocates are wary about the prospects that even the most popular education bills will come up for a vote. The Republican leadership in the legislature already stripped these same measures, endorsed by the bipartisan Blue Ribbon Commission, from Gov. Tony Evers’ budget. And Fitzgerald, who is running to succeed retiring U.S. Rep. Jim Sensenbrenner, has shown little interest in bipartisanship and has scheduled only two days of floor votes this session.

“Republicans had the chance to pass much of this in the budget and make it an immediate reality for kids (when it was part of the governor’s original request) but instead they gutted the K-12 education budget and are now putting forward stand-alone bills,” says Heather DuBois Bourenane of the Wisconsin Public Education Network (WPEN).

Still, the fact that the bills are coming up again, with Republican cosponsorship, is “a huge step forward,” DuBois Bourenane adds. “It’s hard to imagine any reason that these 4K bills would not advance. They were recommended by the Republican-chaired Blue Ribbon Commission on School Funding. They have clear bipartisan support in the Capitol. They are widely supported by public schools, parents, employers and communities. And most importantly, they’re a small step toward doing the right thing for all kids by investing in early childhood education.”

After the budget battle, WPEN vowed to keep score and give grades to state legislators on their education votes. And DuBois Bourenane sounds serious about that threat: “I would imagine that any legislator willing to oppose these bills would have a lot of explaining to do back home.”