By Edgar Mendez, Milwaukee Neighborhood News Service - Oct 4th, 2019 10:51 am
Get a daily rundown of the top stories on Urban Milwaukee 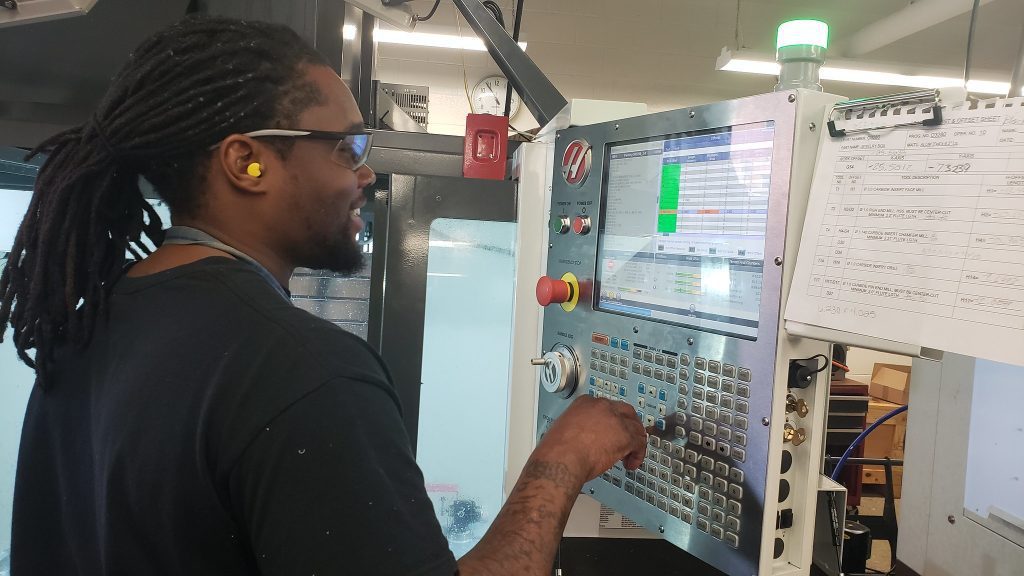 “It’s not just about the money either. I want an opportunity to grow with the company,” said Justin Ashford, 32, who recently completed the Computer Numerical Control training program at MATC. Photo by Edgar Mendez/NNS.

As he stands in front of a Computer Numerical Control machine in a first-floor workshop at Milwaukee Area Technical College, Justin Ashford, 32, reflects on the multiple job offers he’s received.

“It’s not just about the money either. I want an opportunity to grow with the company,” said Ashford, who was days away from completing the school’s accelerated four-month CNC training program that was made available to inmates in 2018. CNC machining is a process in which precision parts are produced through computer inputs.

Ashford and seven other participants were in the classroom for eight hours a day, five days a week and even some weekends to complete the intensive course. They received training in how to read blueprints, metrology as well as other technical skills. He will walk out with a certificate in a high-demand field in hand — as a free man.

It’s something that would have been hard to imagine a year ago, said Ashford. At the time, he had just begun serving an 18-month sentence at the Milwaukee County House of Correction in Franklin. As a condition of completing the program, all incarcerated participants are released from jail.

“It’s a perfect opportunity to make a new beginning,” said Ashford, who hopes to become a tool and die maker.

Ashford is a participant in the UMOS TechHire program, a federally funded initiative to provide accelerated training in technology fields and other skilled trades. The CNC component of the program was developed through partnerships with the South Side nonprofit UMOS, the Department of Children and Families, the Wisconsin Department of Corrections and several local manufacturers, said Joni Theobald, director of the program. Ashford was a member of the third cohort of the CNC program.

“Unemployment is low and about 40 percent of the manufacturing workforce will be retiring within 20 years,” she said. Demand is so high for graduates of the CNC training program that starting pay averages between $16 and $22 per hour.

“These companies are pitting against each other to hire these students,” she added.

Bryan Obst, human resource manager for Trace-A-Matic, a Brookfield-based company that produces parts for aerospace, mining and other industries, said almost half of his company’s workforce will be entering retirement age within the next 10 years.

In inmates, they’ve found eager students looking for a second chance and to keep learning, Obst said. Supervisors of companies, including Trace-A-Matic, Reich Tool & Design and Senior Flexonics, observe students in the classroom and conduct “pitch sessions” and tours at their respective companies. Eventually, they hire some participants as interns.

“These guys are getting jobs even during their incarceration period. They have taken a sense of pride and ownership of their accomplishments because this program was difficult with high standards,”  said Jose Hernandez, assistant superintendent at the House of Correction.

In addition, the program allows participants the chance to view the correctional facility as a place where they can find opportunities to improve their lives, he said.

Once participants go back home and begin their internships, the TechHire program continues to support them in obtaining their licenses, finding transportation to work and overcoming housing and other challenges that can increase the odds that they will be incarcerated again, Theobald said.

Wilberto Velez, 40, a military veteran who said he fell on hard times in recent years, is among the participants eager to launch a new career.

“I’m completing my sentence, doing what I’m supposed to do and moving forward,” Velez said. “No matter what happens in your life, you can still accomplish anything.” He said he’s already received several job offers.

Another is Andrew Anderson, who became a father seven months ago. He grew up in Cudahy, a manufacturing heavy suburb, and took shop classes in high school. But, he said, he never applied those skills.

“It was time to start using those skills and also learn new ones,” he said. “I did it because I want to have a good career and be a good father.”

Dale Howser Sr., who’s been an instructor at MATC for 25 years, said the students from the House of Correction actually do better in the course than traditional students, who also take the training.

“They’re here every day and leave here with the skills and commitment to get a good job and career,” Howser said.

Ashford’s hope is that other inmates take advantage of that opportunity.

“Things happen in life, but you can better yourself,” he said. “You can make a new start.”