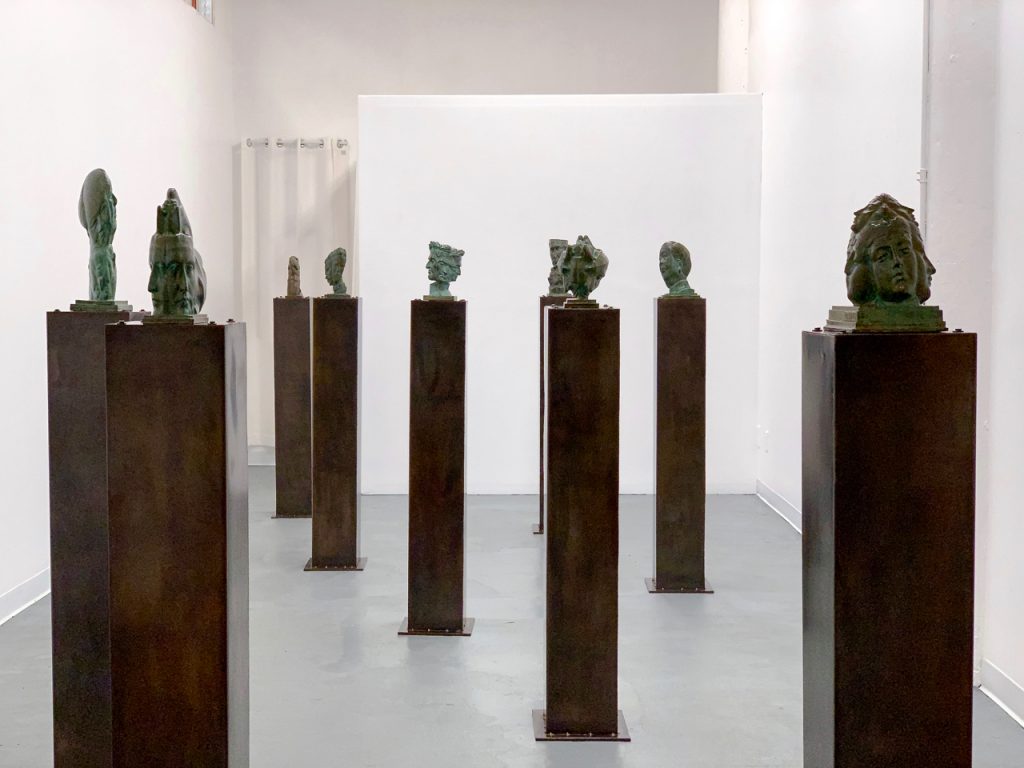 Neilson’s nine multifaceted, patina bronze works are reminiscent of Hellenistic sculptures, with a touch of the absurd and fantastical. Some, like “Rootin’ Tootin’ Putin Too,” “Water Margin (Make it With Anyone Anyhow),” “It Is Aye Again (Make it With Anyone Anyhow),” and “Bi Buy Bully” represent political figures like Vladimir Putin, Mao Zedong and Theodore Roosevelt. With meticulously detailed faces on the top, bottom and sides of the sculptures, Neilson’s works can be viewed in many ways. Putin, for example, is a man both loved and hated worldwide, and Mao is considered both a villain and a hero. Roosevelt’s political achievements (founding America’s National Parks system, for example) seemed to clash with his hobbies and personal beliefs (like hunting exotic animals for sport).

“Golden Ratio (Only the Fools Know What it Means),” a bronze reproduction of a muscular, headless male torso, could represent the exhausting, and sometimes futile, pursuit of the perfect body. “Abandoned in the Vernacular (With a Master’s Degree),” a reproduction of what appears to be the three-dimensional face of a Greek or Roman philosopher, wearing a laurel crown and with an imperious expression on his face, seems to be a comment on higher education. Does society value advanced degrees as they once did, or do graduates struggle to find meaningful employment? Do some master’s degree holders feel isolated from their less-educated peers? “Adam Prelapsarian” and “Eve Postlapsarian” could explore the origins of gender and how men and women are portrayed in a religious context.

The Purgatory Misplaced sculptures are placed on painted dark brown steel pedestals of the same height, which Neilson also created.

“With the ethos that in an absurd world only the farcical is truly genuine, Neilson creates sculpture that tease at the liminal spaces existing somewhere between truth and fiction, joy and suffering; redemption and damnation,” reads the exhibition’s press release.

Neilson, a Detroit native and the Frederick R. Layton Distinguished Professor of Studio Art and Professor of Art at Lawrence University, has exhibited his works nationally and internationally. He received his MFA in sculpture from the University of North Carolina at Chapel Hill.

Gallery owner Frank Juarez met Neilson several years ago and was impressed with his work. In 2017, the Juarez Gallery hosted Neilson’s first exhibition, Credo Quia Absurdum, sculptures created with medium density fiberboard and handmade milk paint. Juarez feels that Neilson’s work appeals to those who enjoy both traditional, representational art and abstract art. “I think that he’s ahead, in terms of his audience,” Juarez noted. He considers the nine sculptures “meditative pieces.”

“Every time you turn, the perspective starts to change,” Juarez added.

Purgatory (purgatorium) means “a place of cleansing” in Latin, and the exhibit’s title could perhaps hint at its viewers coming to terms with their own personal and political beliefs and attempting to understand the roots of these beliefs. Purgatory Misplaced also reminds its audience that human beings and societal views can often be a lot more complex than they seem at first glance.