He's led United Migrant Opportunity Services for the past 45 years.

By Ana Martinez-Ortiz, Milwaukee Neighborhood News Service - Oct 3rd, 2019 11:25 am
Get a daily rundown of the top stories on Urban Milwaukee 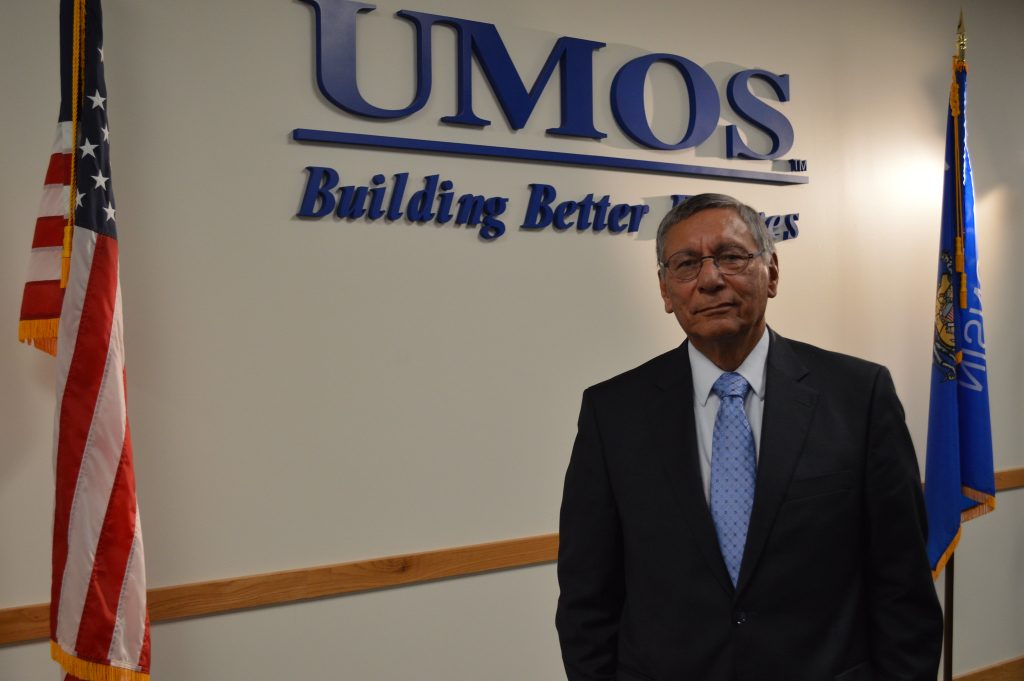 Lupe Martinez works seven days a week to ensure that UMOS continues to assist those who need its wide range of services. Photo by Ana Martinez-Ortiz/NNS.

When Lupe Martinez was a child he was called El Viejito, which means “the old man” in Spanish. Given the circumstances, it was an appropriate nickname.

“I never had a childhood,” Martinez said. “In my family, there were 10 children, and I, as the fifth member, was the interpreter. I would pay all the bills, I managed the finances for the family, and I would manage the health needs of the family.”

These days, Martinez, 74, can be found managing the operations of over 40 performance-based program contracts as the president and chief executive officer of UMOS, a position he has held for 45 years. He celebrated 50 years with the nonprofit in May.

The mission of UMOS is to advocate and provide programs and services that improve the employment, educational, health and housing opportunities of underserved populations.

Martinez was born in Corpus Christi, Texas. Every spring, when picking season came around, his family would pack up the car and head toward the Midwest.

In migrant families, children as young as 6 or 7 are expected to work in the fields. His job was to haul gunny sacks or baskets to the workers. Later on, he joined his siblings and parents in the fields.

“We had our own little work crew,” Martinez said.

Eventually, the Martinez family shifted gears from being migrant workers to owning a farm, when a couple in northern Wisconsin, the parents’ favorite state, agreed to sell their property. But Martinez, along with several of his siblings, decided to leave agriculture work behind and moved to Milwaukee.

At the time, Martinez was managing his brother’s country-western band and working second shift at a metal stamping company.

“I picked up the newspaper, and it said they were looking for someone to be a community worker at UMOS,” Martinez said.

There were two qualifications. The person had to be bilingual, and they needed to be familiar with farm work.

“I had both, so I was immediately hired,” Martinez said.

UMOS, which stands for United Migrant Opportunity Services, began as an agency for seasonal migrant workers in 1965. This was around the time of the migrant workers civil rights movement, which included such groups as the United Farm Workers.

Part of the reason Martinez decided to get involved with the movement stemmed from his responsibility as the family negotiator.

When the family would migrate to Nebraska, for example, Martinez, then 13, would be the one who negotiated with the farmer or crew leader about sleeping arrangements, picking assignments and so on.

Martinez recalled one experience where the workers were forced to stay in a chicken coop, which hadn’t been cleaned. They were also given the worst fields to pick in, which affected their pay.

“We needed to have some strong advocacy for migrant families because my family went through that same experience more than once,” Martinez said.

When Martinez began working at UMOS, his first job was as a community outreach worker. On his first day, he was handed a travel voucher and sent to Door County, where the cherry pickers worked.

He later enrolled at UW-Milwaukee, and he became a teacher and eventually the director of education for UMOS.

Silvia Rathell, who serves on the UMOS Board of Directors and is the executive director of the American College Health Association, is one of Martinez’s mentees. Rathell said she first met Martinez over 20 years ago when she volunteered at Mexican Fiesta during college.

“He was so approachable and humble,” she said. “When I first met him, I never would’ve known he was the CEO.”

Martinez took Rathell under his wing. Everywhere he went, be it a conference or a meeting, he brought Rathell along with him so she could learn the ropes and offer her perspective.

As CEO, Martinez is committed to following UMOS’s mission statement: to provided programs and services to underserved populations. One of his first goals was to diversify funding in order to help more groups. UMOS now receives more than $25 million in grants. Last year, UMOS invested nearly $6 million toward child education and development.

Rathell said Martinez is a leader who rolls up his sleeves. He doesn’t just give the orders, she said.

Martinez never turns his phone off and works seven days a week.

“We’re constantly moving, and that’s what the organization does in order to survive,” Martinez said.