Alan Goodman has been baking with family recipes since he was a teen, and his bakery just won $10,000 as the winner of Rev-Up MKE.

By Ana Martinez-Ortiz, Milwaukee Neighborhood News Service - Oct 1st, 2019 10:38 am
Get a daily rundown of the top stories on Urban Milwaukee 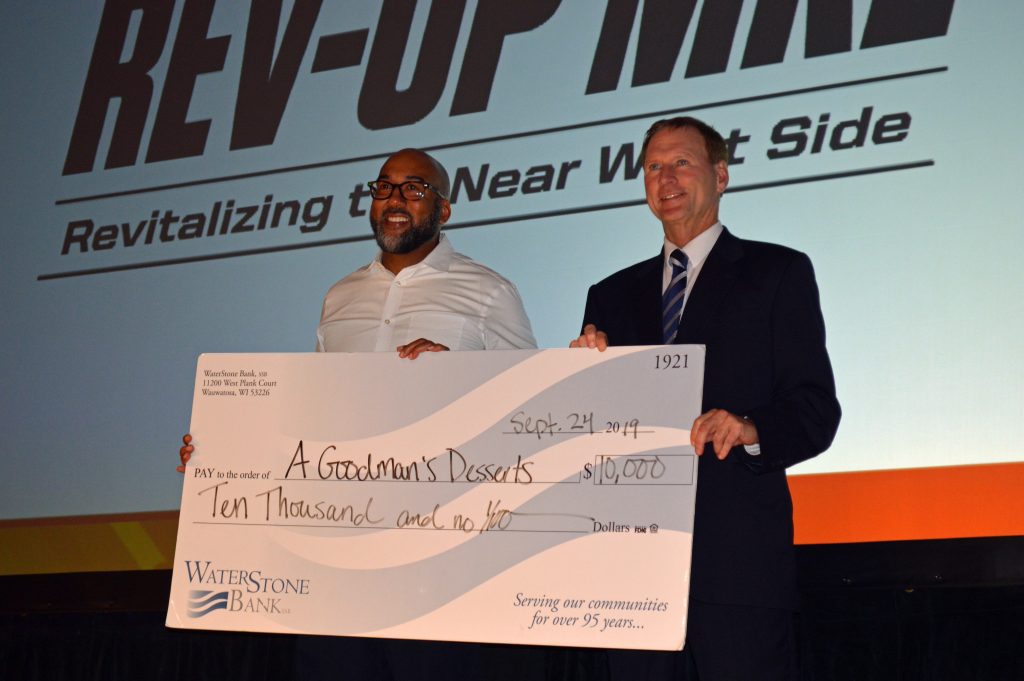 “When you have a good dessert, it changes the energy of the room,” says Alan Goodman, the owner of A Goodman’s Desserts. Photo by Ana Martinez-Ortiz/NNS.

When Alan Goodman was a teenager, he once told his parents he was going to study at the library when he really was headed to the park to play basketball.

Eventually his lie caught up to him and he was grounded.

As part of his punishment, Goodman had to help his mother and godmother with cooking and baking. Soon after, what started as a punishment turned into a passion.

Now Goodman is the owner of A Goodman’s Desserts, which took first place last week in the Rev-Up MKE small business competition.

Using family recipes along with some of his own creations, Goodman started the business in 2018 selling homemade cookies, bread pudding and cakes.

His delectable treats soon became a hit among families and friends, and through word-of-mouth, his business began to expand.

“When you have a good dessert, it changes the energy of the room,” said Goodman, who lives in Lindsay Heights with his wife and three children. They moved to Milwaukee 14 years ago.

The road to Rev-Up MKE

When farmers market season began, Goodman signed up for the Near West Side Farmers Market, and it was there that he first heard of Rev-Up MKE.

Several days before the deadline, Goodman submitted his application, and a few days later, he learned he was a finalist.

Keith Stanley, the executive director of Near West Side Partners, said the competition began as a way to honor and recognize the history of entrepreneurship in the neighborhood.

Twenty-six new businesses have come to the community, and many are there because of Rev-Up, Stanley said.

“Those places are now the lifeblood of the community,” Stanley said.

As part of the competition, the finalists spent weeks prepping for the live-pitch event. They met with mentors, attended workshops and practiced their pitch.

Goodman said the prep work helped him when it came to deliver his pitch. It didn’t hurt that he also had a solid business plan thanks to his two degrees in finance.

As the winner, Goodman received a $10,000 check from WaterStone Bank. In addition, as the winner, he will receive $25,000 in in-kind services that include bookkeeping, payroll and benefits as well as a free legal audit.

He plans to use his winnings for strategic marketing and look for a bigger kitchen space.

“I’m a legitimate business and winning a pitch contest proved my legitimacy,” he said.