Er, make that coffee hauses. Run by robots. And made to order in “Wisconn Valley.” 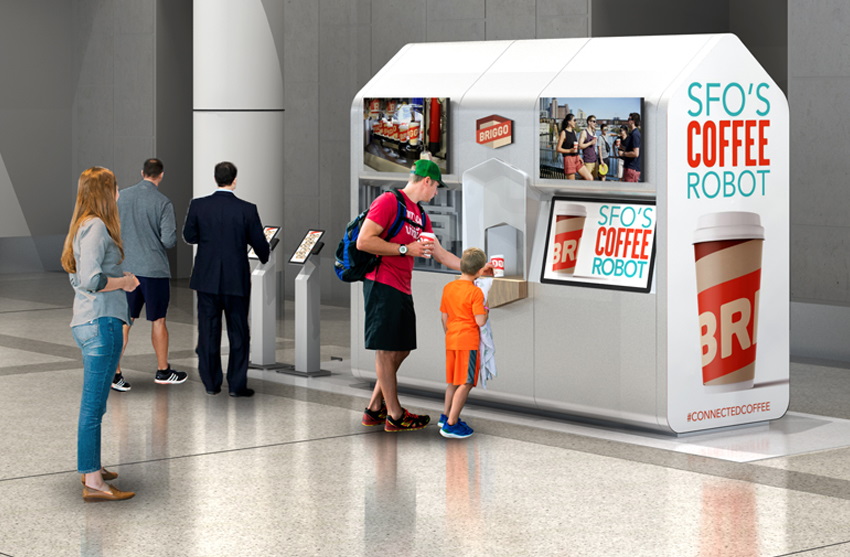 While it’s true that Foxconn won’t be creating the eighth wonder of the world, building a 20-million-square-foot manufacturing campus, or hiring 13,000 employees, it does have big plans, which were announced last week.

Ahem. Foxconn will be manufacturing a line of fully automated, robotic brewing machines that that can push out 100 cups of coffee in a single hour — equaling the output of three to four baristas, according to the Briggo company, which sells the machines, which they have dubbed a “coffee haus”.

The coffee haus will end all the travails you’ve no doubt suffered trying to order a latte or Americano at the local cafe. “No more lines, no more counter confusion, no more misspelled names,” Briggo’s website promises. Ah yes, it’s the misspelled name that always gets my goat.

Well, those bad old days are over because Briggo’s automated machines make you the barista, giving you control over ingredients, espresso shots, flavorings and temperature without any human interaction.

If it seems strange to have a coffee house without people (I don’t think Samuel Johnson would approve) remember this is a coffee haus, not house, and it’s really meant (so far) more for airports and office buildings, where some of the 10-foot by 4-foot machines currently operate.  For instance, the Briggo machine at the San Francisco Airport is located inside Terminal 3 next to the security entrance, in case you were wondering.

You want choices? The Briggo coffee haus can make two million kinds of coffee drinks, as this entrancing video explains. You could devote the rest of your life to discovering all the haus options for caffeinated pleasure.

Initially Briggo’s robotic barista “worked well technically but had all the charm of an airport terminal,” as Wired magazine reports. So the company brought is Yves Béhar and FuseProject to overhaul the design.

“It is important for the design to turn Briggo into a destination rather than a thing,” Béhar told the publication. “We named it ‘Coffee Haus’ and designed it to look, smell, and feel like a coffee shop.”

“Walnut paneling gives the Briggo system the feel of a local coffee shop,” the story noted, “while a perforated curtain reveals glimpses of the high-tech robotic mechanisms at work. The facade was crafted to allow some of the sounds to bleed through, letting patrons hear their beans being ground in real time, enhancing the brand through auditory cues.

So Foxconn won’t just be manufacturing a machine, but a high-tech experience, an immersion into the feeling of fresh-roasted beans being pulverized in real time. The Taiwanese manufacturer will be partnering with an Austin-based company that has earned 21 patents for its technology and was ranked on Fast Company’s 2019 list of the World’s Most Innovative Companies.

And what does Foxconn bring to the table? It is “an established leader in Industrial AI, cloud computing and supply chain management,” Briggo’s press release declared, that “will leverage its expertise in smart manufacturing, supply chain management and global reach in implementing system production in the Wisconn Valley Science and Technology Park in Mt. Pleasant, Wisconsin.”

Will the robotic baristas be built by robots at the Foxconn plant? Does this mean the company won’t be building LCD display screens for televisions, but instead products in the medical, manufacturing and office automation fields, as a company spokesperson predicted more than a year ago? Alas, our email with this and other questions got no response from Foxconn.

But the company told the Biz Times the Briggo machines would not be built in the manufacturing plant, but in another facility on the campus.

The constantly changing plans of Foxconn have begun to be met with cynicism by tech publications that cover this sector of the economy. Techspot offered this droll take on the partnership with Briggo: “Robotic coffee machines appear far from the LCDs that Foxconn said it would be manufacturing at the plant, but they do have displays and other electronic parts.”

The Verge was a tad more brutal, writing that “Foxconn will help (Briggo) manufacture its units in its Wisconsin LCD factory, which doesn’t exist yet — and thus produces no LCDs, or any other product for that matter — and which Foxconn has previously claimed it plans to use for a variety of manufacturing purposes… The factory has come under immense scrutiny these past two years for remaining in a perpetual and chaotic state of Kafkaesque mismanagement.”

Still, it is the first actual product that will be manufactured at Foxconn. Though not much of a return to taxpayers, who will pay $350 million in upfront costs for a massive plant that will never happen. And probably small consolation for all those former homeowners in Racine County angry about being pressured to sell their homes for a project whose only firm plans so far is for a better brand of automated cappuccino.