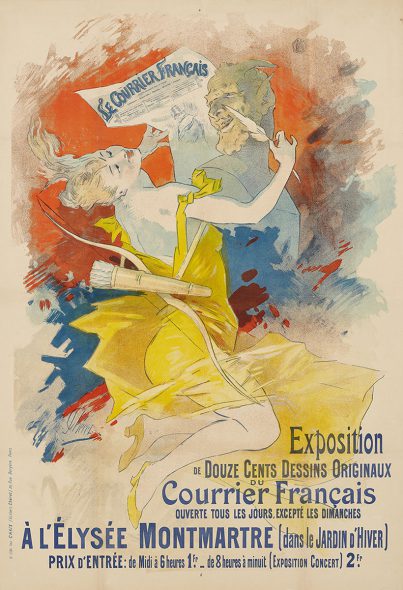 Long before Adobe Photoshop and other computer graphics programs, illustrators created advertisements for publications by hand—which often yielded stunning results. One prominent illustrator and advertising pioneer was French artist Jules Cheret, whose attractive, lively posters helped sell many types of products, including alcohol, and promote events and theaters such as the Moulin Rouge in late 1800s France.

The Milwaukee Art Museum’s current exhibit, Petite Posters: Jules Cheret and Le Courrier francais, on display through November 17 in Level 2 of the museum in Gallery 202 of the European Art Galleries, showcases about a dozen of Cheret’s colorful lithographs and an edition of the weekly publication Le Courrier francais. These posters are a small part of a 600-piece collection of Cheret’s works, a promised gift to the MAM by Susee and James Wiechmann.

Beginning in 1884, Cheret’s advertisements, financed by the pharmacist Auguste Geraudel, were printed in Le Courrier francais. Founded in 1884 by Jules Roques, a publicity broker, Le Courrier celebrated the art of advertising, which was a new industry at the time, but one that would experience staggering growth in decades to come and have an indelible impact on sales and marketing.

Cheret’s work became very popular, and many Le Courrier subscribers purchased his posters to hang in their homes. In turn, the journal published a number of Cheret’s illustrations (in addition to his advertising lithographs) and ran an edition dedicated to his works, in conjunction with the artist’s Parisian solo exhibition in 1890. Le Courrier help propel Cheret to great success, and he soon gained large manufacturing and railroad companies as advertising clients.

Nikki Otten, the museum’s Associate Curator of Prints and Drawing, said curating Petite Posters “allowed me to examine a lesser-known aspect of Cheret’s career and illuminate the role the magazine played in elevating the status of his art.” 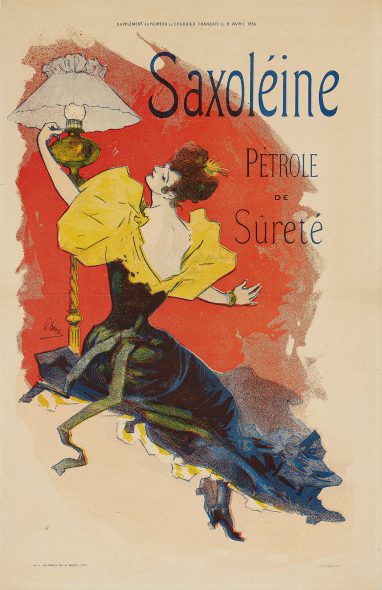 Cheret’s posters feel light and airy. His carefree subjects, mainly women, enjoy the finer things in life—a delicious meal in an upscale café, a glass of top-shelf liquor; stunning clothes in the latest fashions, made of sumptuous fabrics. Fur wraps and tall hats with feather plumes were considered haute couture at the time, and Cheret’s illustrated women carry them off with aplomb. Some of the women are pictured holding regal white cats—Persians, perhaps.

Several posters, including one advertising a masquerade ball, tend towards the fanciful. Cheerful clowns are linked arm-and-arm with laughing women; theatrical performers dressed in outlandish costumes pose for a picture. The French “joie de vivre” was exalted through Cheret’s ads; it’s apparent he was intrigued by the vibrant nightlife in Paris, particularly the Montmarte district, a haven for artists and theater actors at the time.

To many, Cheret’s posters appear progressive. Women casually imbibing alcohol and smoking cigarettes, for example, is a stark contrast to the prim and proper societies of Europe and America during the late 1800s, in which such behavior among women was considered scandalous (and dangerous, according to the Temperance Movement of the time). The women portrayed in Cheret’s posters became known as “Cherettes,” and their uninhibited, fun-loving attitudes and appearances had a positive impact on French women, who followed suit.

Petite Posters reveals the amount of artistry and creativity behind these early advertisements, and the impact of advertising, which then and now has a remarkable ability to shape fashion, art, culture and societal norms.