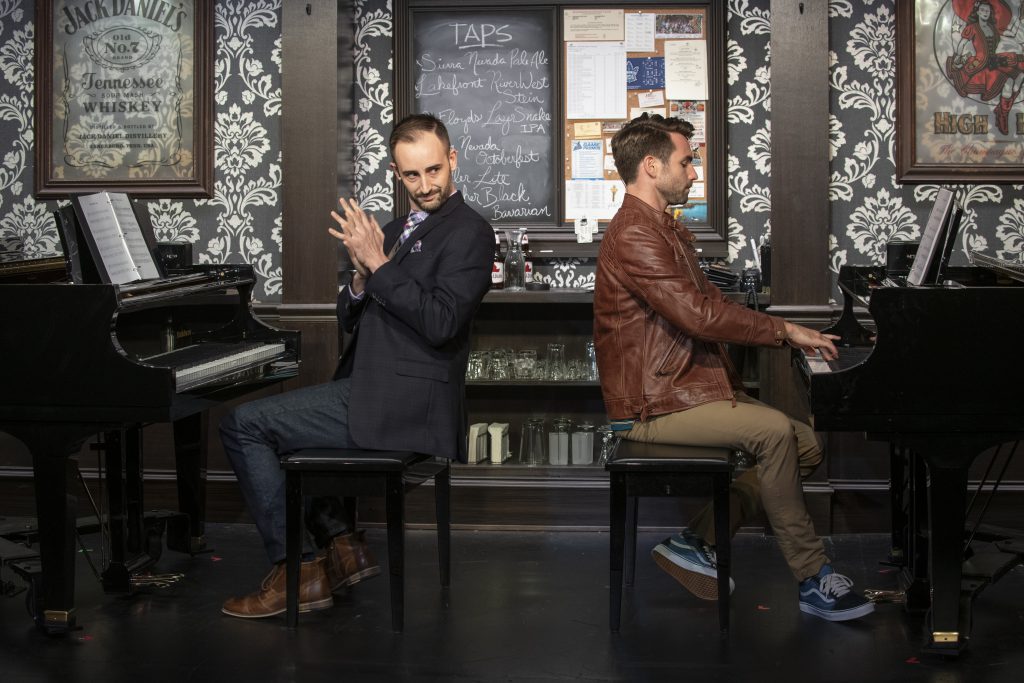 Two musically talented and comedic minded Canadians, Ted Dysktra and Richard Greenblatt, have been performing 2 Pianos 4 Hands around North America for years and have now handed it over to the polished creative team at the Milwaukee Repertory Theater’s Stackner Cabaret, where Joe Kinosian and Ben Moss are offering their impish performance antics through Nov. 3.

It’s a thin conceit to open the Stackner Cabaret season: the plot (two childhood friends who spent years chasing the goal of concert pianist stardom) is made likable for segments of its two hours by the Italian musical terms we have pianissimo-absorbed into our subconscious. Plus the parade of nuns and other music teachers who have beat discipline into their charges with signature clichés that carry humor even to those who never took a piano lesson.

Indeed it is striking how much of the verbal allegros, fortissimos and agitatos even the musically untrained can follow with chuckles as the two pianists pretend to be children and then adults and then children again facing up to the demands of competition and the fancies of music teachers and parents.

The highlights are when the two actors try to clobber each other with who knows the most musical terms. You don’t even need to know who Glenn Gould was to get the drift of a teacher telling a piano student “Sit up, Richard, you’re not Glenn Gould.”

As inventive as the trading off of characters is at times, and how nimble are the piano virtuoso of a duo that moves classical themes mockingly into instantly identifiable strains of popular music, “2 Pianos 4 Hands” seems to be trying too much

It is making us laugh at the idealism and vulnerability of the young piano students while seeking to draw out pangs of sorrow and remorse when they decide – or are told — they are not quite good enough to be classical soloists.  At the same time the piece wants to entertain us with extended bouts of four-handed playing.

Kinosian is also the music director and he and director Laura Braza have sought to mine every quick moment of personality change in the script and the music. He and Moss are skilled at adopting instant characterizations and seek sudden shifts into serious comment on the trials of the artistically inclined.

The staging on a crowded opening night left the audience wanting to see up close the nimble pianistics. The actors try to keep us amused with traded-off raised arms and tilted heads and glances. But it is hard not to feel somewhat removed from the fun. Kinosian and Moss are engaging in comedic acting and surreal smirks that don’t readily allow the duo to drift off – as intended — into more serious undertones.

The Rep should probably be commended for always trying to make these experiences more theatrical than merely a cabaret show.  But this time it is asking too much of too little material. 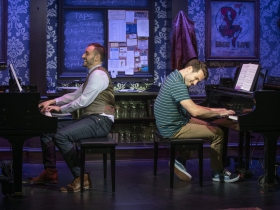 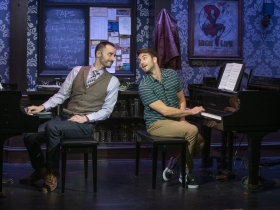 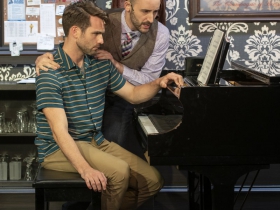 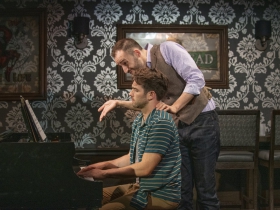 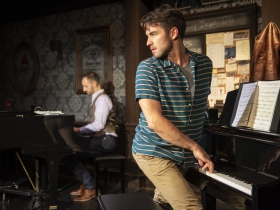 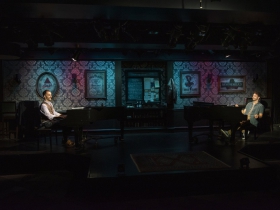