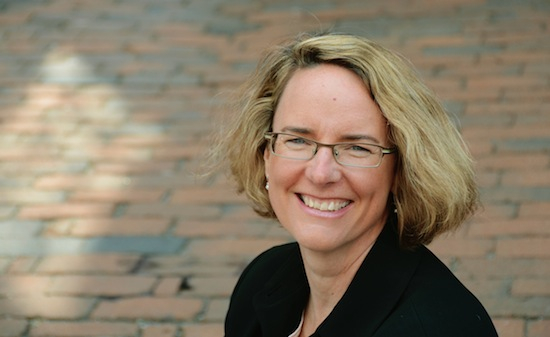 Lynn Richards, president and chief executive officer of the Congress for the New Urbanism. Photo courtesy of CNU.

Richards, the leader of the livable cities advocacy organization, was in Milwaukee Tuesday to speak to the Rotary Club of Milwaukee.

“You have a great city,” said Richards of Milwaukee. “There is so much to build on here.”

She stressed strategies that cities and suburbs can adopt to build more inclusive, welcoming and successful places.

“If you build a place for cars, all you get is cars,” said Richards. Her strategies aim to do the opposite.

The first item is perhaps the most daunting: fix local codes. “If you make it easier to do the things you want to happen, more of that will happen,” said Richards. She said this goes beyond zoning to stormwater management and building codes. Highlighting the multi-year battle by Austin, Texas to overhaul its entire code, she advocated an incremental approach to get things moving.

That strategy matches one advanced by her predecessor at CNU, former Milwaukee mayor John Norquist. Norquist, who lead CNU from 2004 to 2014, had led a reform of Milwaukee’s zoning code during his tenure as mayor and the Department of City Development continues to introduce tweaks today.

The second component is to build more “missing middle” housing. Richards highlighted a number of options from fourplexes and duplexes to tiny homes and accessory dwelling units (often known as “granny flats” or “carriage units”). Milwaukee has a large number of carriage units, an active proposal for tiny homes and is a nationwide leader in duplexes, but Richards said the advice also applies to the suburbs and is part of creating an inclusive region and providing more forms of affordable housing. “As our demographics change, I believe our housing should change,” said Richards.

Her fourth strategy, leveraging infrastructure improvements, included mention of The Hop, but didn’t provide much in the way of specific guidance. Instead, Richards pivoted to a road diet on a small-town California main street that yielded $300 million in investment on a $13 million government investment. Richards noted that government spending sends a signal to the private market and state and local governments should be deliberate with where they are sending those signals.

The final strategy to make “magic happen” in a city is to creatively engage the public. Richards highlighted the “what do you want in this lot” chalkboard sign deployed during the 2015 placemaking experiment in the surface parking lot at N. Vel R. Phillips Ave. and W. Wisconsin Ave. (now proposed to be converted to Phillips Plaza) as an example of engaging people where they are. She said planners must find ways to better engage the public on what’s working, what’s not and what they want to happen.

“When we put people at the center of the equation, a whole bunch of things become possible,” said Richards.

The Congress for New Urbanism’s next annual conference will be held in Minneapolis and St. Paul in June 2020.

One tangent in her presentation, a mention of electric scooters, proved to be quite polarizing. “I personally hate electric scooters,” said Richards to applause from much of the audience and a smattering of boos.

Richards was introduced by Rotarian and CNU-Wisconsin board member Patricia Algiers.

One thought on “Eyes on Milwaukee: 5 Ways to Make to City Magic Happen”