By Erik Gunn, Wisconsin Examiner - Sep 4th, 2019 10:26 am
Get a daily rundown of the top stories on Urban Milwaukee 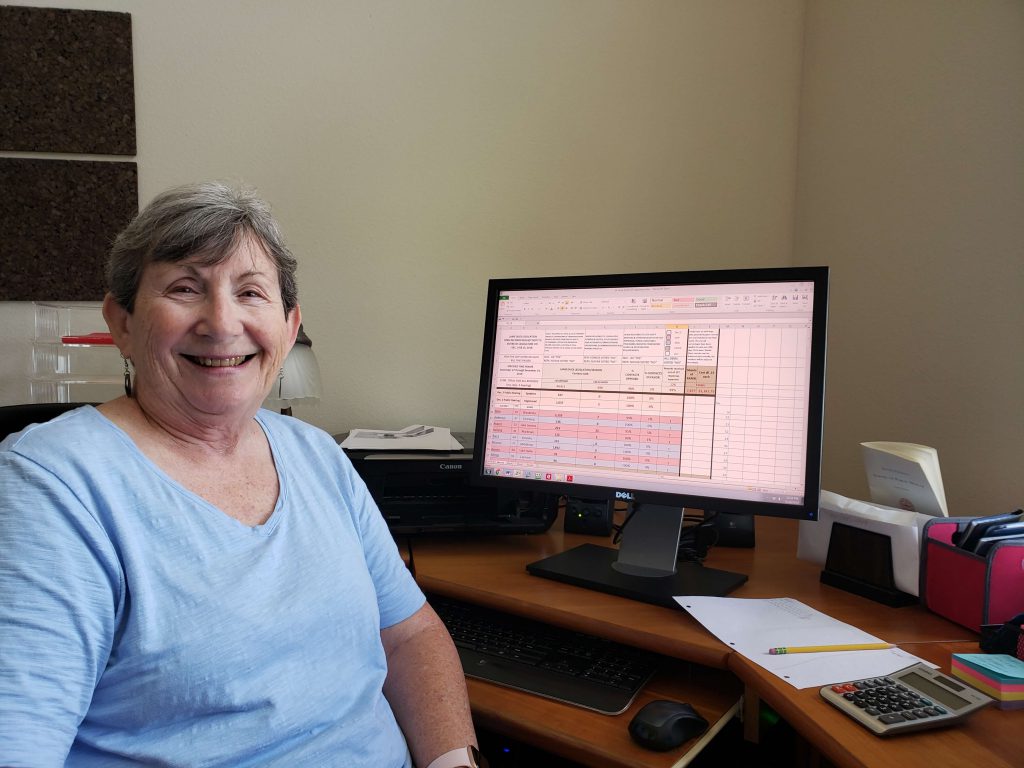 heila Plotkin with a spreadsheet she compiled of public comments for and against the laws Republican legislators passed in December to limit the powers of incoming Democratic Gov. Tony Evers. Photo by Erik Gunn/Wisconsin Examiner.

Republican lawmakers who voted late last year to shackle the powers of incoming Gov. Tony Evers and Attorney General Josh Kaul did so despite thousands of messages from voters imploring them not to, newly revealed correspondence records show.

A tally of email and telephone correspondence with legislators — including a group of more than a dozen Republicans who fought hardest to prevent their communications from coming to light — shows that email and telephone messages ran between 90% and 100% in opposition to the measures rushed through the lame-duck session and signed into law by then-Gov. Scott Walker days before he left office.

The tally was compiled by Madison resident Sheila Plotkin, a retired teacher-turned-open-records activist, after Plotkin won a legal battle that forced the release of records in PDF form from 14 state lawmakers who at first had refused to provide the records except on paper, at a potential cost of well over $1,000.

With all the records in hand in a form she could review on her computer, Plotkin read every email message and telephone correspondence summary to evaluate whether the senders or callers supported or opposed the lame duck session and the bills targeting the powers of the incoming governor and attorney general.

The opposition expressed to Assembly Speaker Robin Vos, who with state Senate Majority Leader Scott Fitzgerald were the key spokesmen for the GOP lawmakers pushing the lame-duck legislation, was just as strong. According to Plotkin’s tallies, Vos received 7,593 messages opposed to 124 in favor; Fitzgerald 3,148 opposed to 69 in favor.

Plotkin, who calls herself a progressive, said she sought to evaluate every communication she reviewed objectively without imposing a slant on it. A sampling of the emails she tallied reviewed by Wisconsin Examiner suggested there was little to no ambiguity about the commenter’s position whether in favor or against the legislation.

“My intention was to discover whether representatives in power were listening to what citizens were telling them,” she said. “I don’t think open government is a partisan issue.”

She acknowledged that often people who are opposed to something may be more vocal in expressing their feelings, and that the correspondents whose messages she reviewed included many who voted for Evers and Kaul and accused the legislators of trying to effectively undo the election results.

But she also noted, and showed examples of, a number of messages from people who described themselves as Republicans but strongly criticized the lawmakers’ actions.

Moreover, she said, she found it disturbing that lawmakers should disregard such a disproportionate number of people who opposed their actions.

“When you receive over 5,000 contacts, some of which are from people who say, ‘I voted for you in the past and I’ll never vote for a Republican again,’ it behooves you to pay attention,” she said.

A pioneering diagnostic teacher of deaf and hard-of-hearing students from Milwaukee who moved to Madison after her retirement in 1996, Plotkin, 81, is already experienced as an open-records watchdog.

She first took up the cause in the aftermath of a 2015 attempt — ultimately defeated — to gut parts of the state’s open records law. She went on to conduct a series of open-records searches to see what legislators were actually hearing from constituents on a series of controversial measures.

Those included a bill exempting politicians from investigation under the state’s John Doe investigation law, and another bill replacing the nonpartisan Government Accountability Board with partisan bodies policing ethics as well as elections and campaign financing.

The discovery that legislators appeared to routinely ignore extensive communications from constituents and others opposing these and other pieces of legislation inspired a website, We the Irrelevant, where she recounts her findings and shares her data.

Her efforts garnered her a following on Facebook as well as, for a time, a group of volunteers to help with some of her open-records investigations. To defray costs, she launched fundraising campaigns on Kickstarter. And in 2016, she was recognized for her work by the Wisconsin Freedom of Information Council.

By the time of the 2018 election, “I had not been going to do another open records request,” Plotkin said. Her previous findings, she figured, had already made the case clear that lawmakers weren’t listening. But when the GOP leadership called the lame-duck session to clip the wings of the incoming Evers and Kaul, she said she felt compelled to investigate once more.

“I myself was shocked by what they were intending to do,” she said. She knew other people were contacting their legislators in alarm: “The more I saw, the more I felt I needed to honor them.”

The bills passed in the lame-duck session included legislation curbing the attorney general’s power to drop out of or settle lawsuits. That temporarily prevented Kaul from keeping a campaign promise to withdraw from a multi-state suit brought by Republican attorneys general, including Kaul’s predecessor Brad Schimel, to overturn the federal Affordable Care Act expanding health insurance to most people not previously covered.

When a lower court declared the lame-duck laws unconstitutional, Kaul went ahead and withdrew from the anti-ACA suit. The state Supreme Court, on a 4-3 vote, subsequently reinstated most of the laws, including the limits on the attorney general’s power to drop or settle lawsuits, but left his exit from the ACA suit untouched.

The lame-duck session also required Evers to wait eight months into his term before he could replace the director of the troubled Wisconsin Economic Development Corp., the Walker administration’s jobs agency plagued by scandal for doling out money to businesses without adequate oversight.

The voice of the people?

When the Assembly passed the lame-duck package in early December, Vos (R-Rochester) praised the measures as “an important step in restoring the balance of power in government” and calling the legislature “the most representative branch of government and the closest to the people of Wisconsin.”

After the state Supreme Court upheld the laws, Fitzgerald (R-Juneau) declared the ruling by the court’s conservative wing “a win for the people of Wisconsin.”

Last week, Wisconsin Examiner emailed Vos and his aide Kit Beyers seeking comments about the lame duck session and what Vos perceived to be public opinion about the GOP’s actions. Neither Beyers nor Vos responded to the inquiries.

But Plotkin’s research—which included emails as well as notes on telephone calls to lawmakers’ offices—left her with the opposite view: that tens of thousands of opposition messages had no effect on the votes of the vast majority of Republican legislators who voted for the bills.

“It’s depressing to see how many people took the trouble to write and were ignored, because they could be without punishment,” she said. “I remember when elected representatives paid attention to what people said. We’ve lost that, and I find that very disturbing.”

The cost of paper

It also showed sharp disparities among legislators in how they respond to open records requests. And this week, it prompted a column from the Wisconsin Freedom of Information Council on how the ability to charge people for records is undermining open government.

Plotkin specified in her request that she wanted electronic records of communications, including email and summaries of phone calls from constituents. Of the legislators the vast majority provided them in that form.

But 15 did not. The rest, including Assembly Speaker Robin Vos and Majority Leader Jim Steineke, printed out a mass of copies of records. A Republican staffer told her she could review them in the state capitol building at no charge. If she wanted copies of any, she would have to pay 15 cents a page.

Or, she was told, she could have them all sent to her at a cost of $1,181.75, not including postage, perhaps hundreds of dollars more. “I don’t know what it would have cost to mail 7,800 pieces of paper,” she said.

Plotkin rejected that response, noting that her original request had specified electronic records, and was rebuffed. At that point she enlisted attorney Christa Westerberg of the law firm Pines Bach, to press the case on her behalf.

In the midst of pretrial exchanges, however, the Republican lawmakers relented partially, providing PDFs of the copies that they had already made and turning them over to Plotkin at no charge. Although they were not strictly speaking the electronic records in the form she sought, Plotkin agreed in order to settle and move ahead with her analysis.

Reviewing the PDFs, Plotkin said she found pages and pages of material completely outside the scope of her original request.