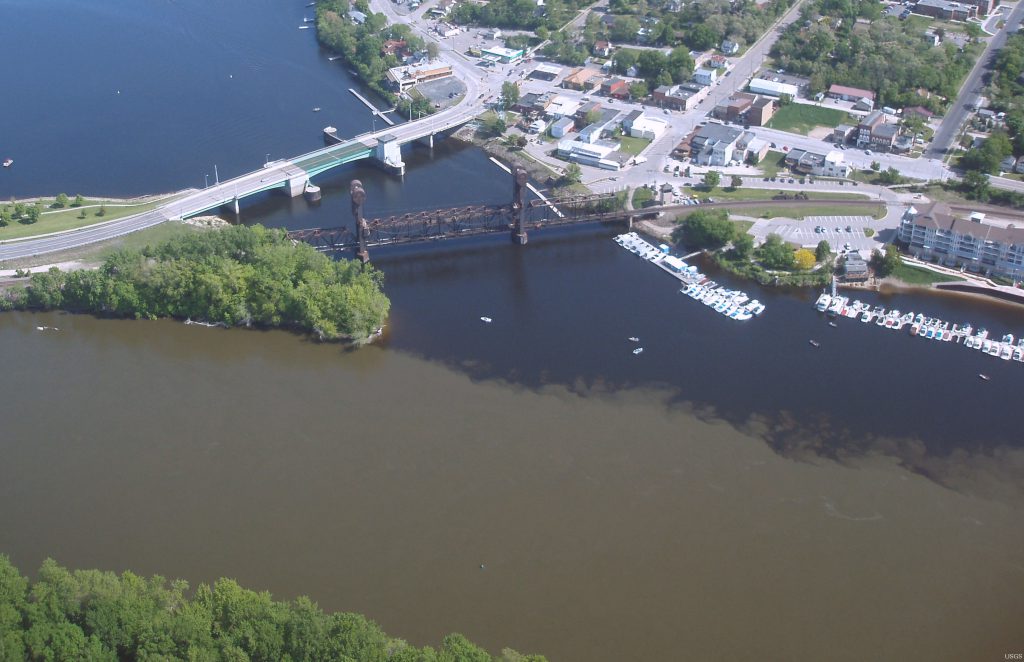 Prescott, Wisconsin, is just cross the St. Croix and Mississippi rivers from Minnesota. Photo is in the Public Domain.

Under the title, Wheels Have Fallen Off Liberals’ “Minnesota Is Utopia” Argument, the MacIver Institute’s Chris Rochester argues that:

Unfortunately for partisan hacks trying to pull a fast one on the mainstream media and the Wisconsin people, there is now plenty of evidence that the conservative fiscal policies enacted under Gov. Walker have pushed the Badger State right past Minnesota since 2011.

In his attack on the EPI, Rochester concentrated on a subset of the metrics as shown by the table below. 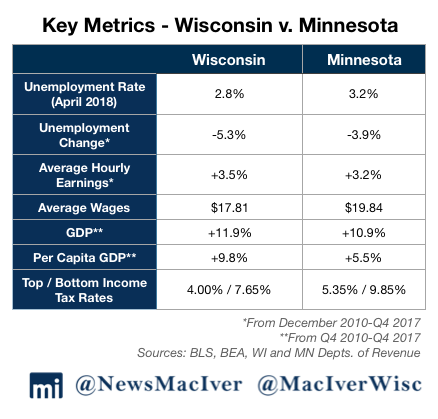 Notably absent from Rochester’s critique is a comparison of jobs in the two states. This absence is striking given that Walker’s promise to add a quarter million private sector jobs was fundamental to his election. The omission is perhaps unsurprising but dishonest. Compared to Walker’s promise that if elected governor he would create 250,000 new jobs in his first term, Wisconsin actually saw about half the promised jobs hike.

A number of Wisconsin’s neighbors, including Minnesota, did better. The next graph shows the number of jobs in Wisconsin (in red) versus those in Minnesota (in blue) between January 1990 and July of this year. Minnesota has a smaller population, but has been closing the gap, particularly during the Walker years. 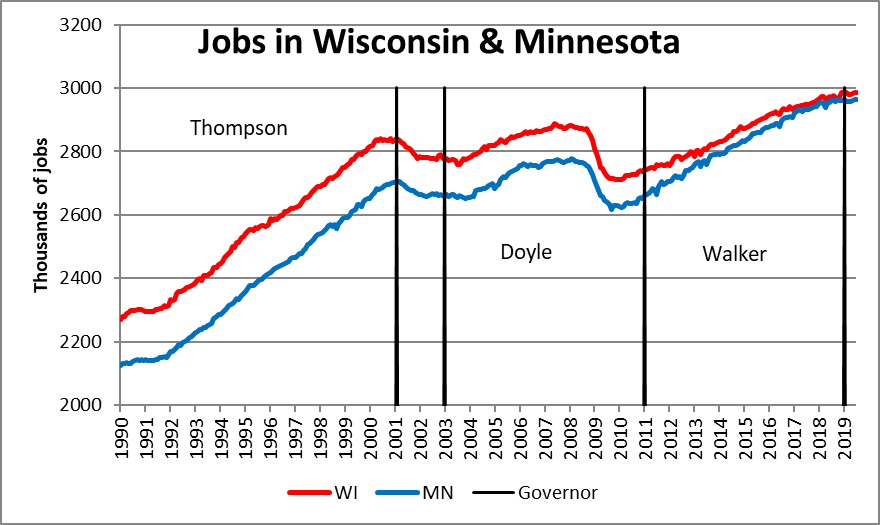 As the next chart shows, Wisconsin job growth during the Walker era underperformed the expected level if it kept the previous relationship with neighboring states’ jobs. Predicted jobs in the chart are based on regressing Wisconsin jobs against those in six neighboring states–Illinois, Michigan, Ohio, Indiana, Minnesota, and Iowa for the Thompson–McCallum–Doyle era between 1990 and 2011. The coefficient of determination for this regression is .999, meaning that the equation accounts for 99.9% of the variation over these 21 years. 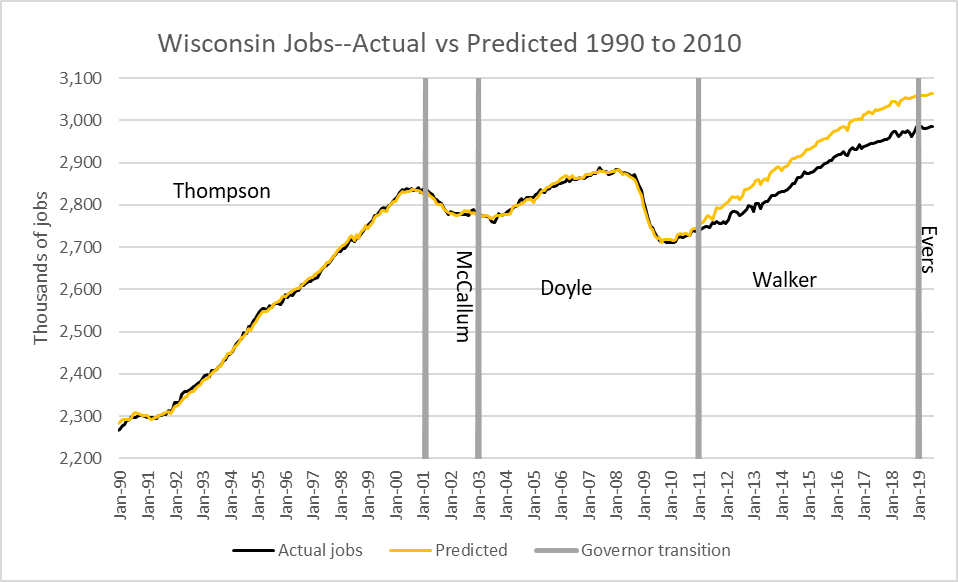 As the chart above shows, between 1990 and 2011, it is possible to get an excellent fit using only jobs data from the six neighboring states. Adding in the Walker-era data, makes the fit break down. The resulting regression under-estimates job growth during the Doyle years and over-estimates jobs during Walker’s term. One way to fix the problem is adding another variable—the time since Walker took office. Doing this leads to the suggestion that every month in office cost the state 932 jobs.

Thus, Wisconsin under Walker adds to the evidence that so-called “supply-side economics,” the premise that low taxes (particularly on high earners) are the secret to job growth, is not supported by evidence. It is probably wishful thinking, however, to expect MacIver Institute folks to learn anything from this experiment. Their commitment to the theory outweighs their commitment to evidence.

Probably the strongest argument for Wisconsin’s economic superiority is the behavior of the unemployment rate. The next chart shows the rate for Wisconsin (in red), Minnesota (blue), and the US (black) from the start of the Great Recession to today.

At the height of the recession Minnesota’s rate was about a point lower than Wisconsin’s and started to decline earlier. It fell to 3.6 percent in 2015, several years earlier than Wisconsin, but then it stalled. What accounts for the strange behavior of Minnesota’s unemployment rate?

Traditionally, economists believed that there was a “natural unemployment rate” that reflected the normal churn in employment in a “full employment” economy. High school and college graduates and people leaving a job might take a while to consider their options before accepting a job offer. Commonly, economists assumed a natural rate around 4.5 percent to 5 percent, well above the current Wisconsin or Minnesota rate, or even that of the nation.

The next chart shows the net migration rates for Wisconsin and Minnesota taken from Governing and Business Insider magazines. Note that Minnesota’s numbers are positive: more people moved to Minnesota than left. Meanwhile, Wisconsin’s are negative, so that there was a net outflow. If people without jobs are more likely to move to another state, unemployment in the sending state, such as Wisconsin, would likely go down, while that in receiving state would rise. 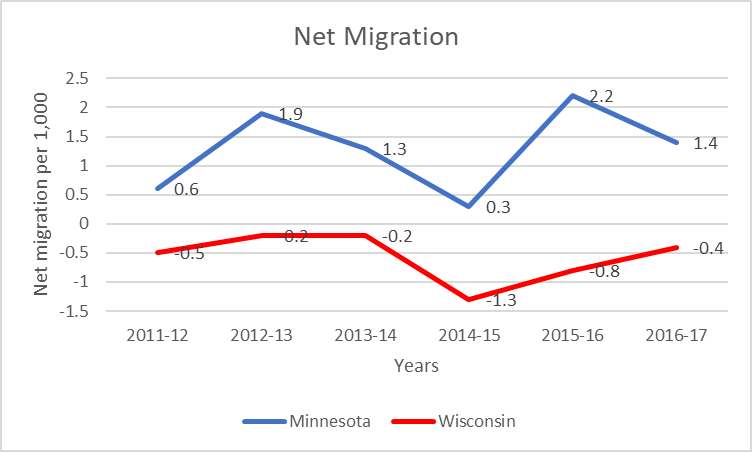 The next chart shows the gross domestic product (in 2009 dollars) for Wisconsin and Minnesota. For years Minnesota’s GDP has been growing faster than Wisconsin’s, as has its population. (These numbers come from the U.S. Bureau of Economic Analysis through the Federal Reserve Bank of St. Louis’ FRED database). 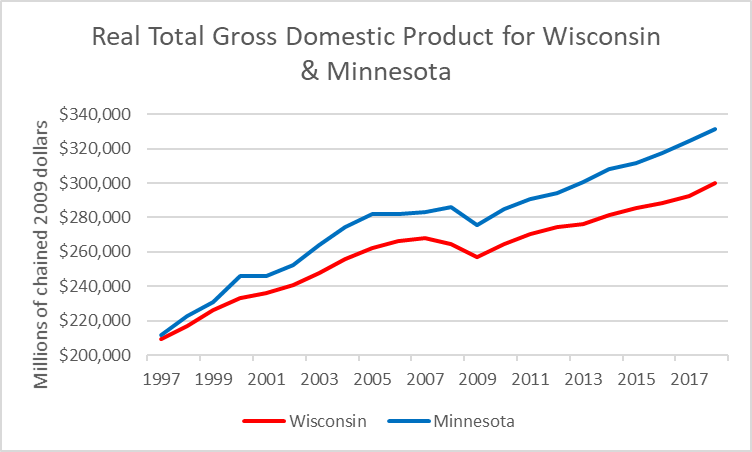 During the Walker administration, Minnesota continued to gain on Wisconsin in population (rising 3.6 percent versus 1.3 percent in Wisconsin) and GDP (up 10.2 percent in MN versus 6.6 percent in WI) and GDP per capita as shown in the table below.

Finally, the MacIver chart at the top of this column, reports Wisconsin vs. Minnesota tax rates, but does not discuss them. Two questions to ask about any state’s tax system are:

State and local governments mostly depend on three types of taxes: sales, property, and income taxes.

Of these, sales taxes are the most inherently regressive: they normally take a much larger share of the income of low-income families than of wealthy families. This reflects the fact that as income goes up, a larger and larger share goes to savings and purchases, such as services, on which no tax is paid. As the next graph (based on data from ITEP–Institute on Taxation and Economic Policy) shows, both states’ sales taxes follow this rule. The top 1 percent pay 0.8 percent of their income in sales taxes in both states; the bottom 20 percent pay 6.5 percent in Minnesota and 5.8 percent in Wisconsin. 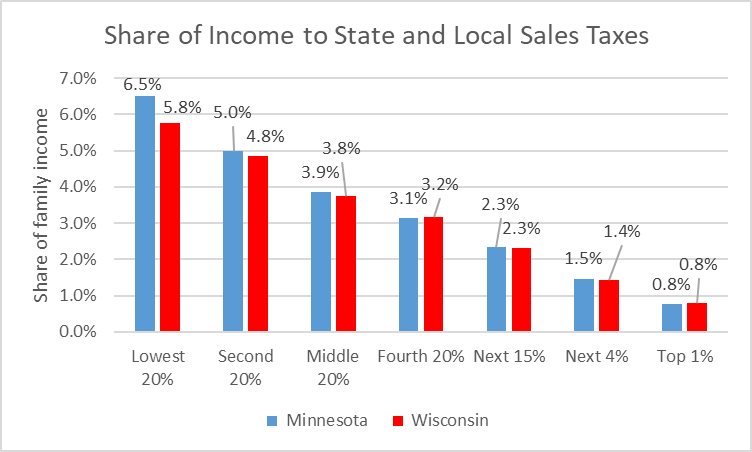 Share of Income to State and Local Sales Taxes 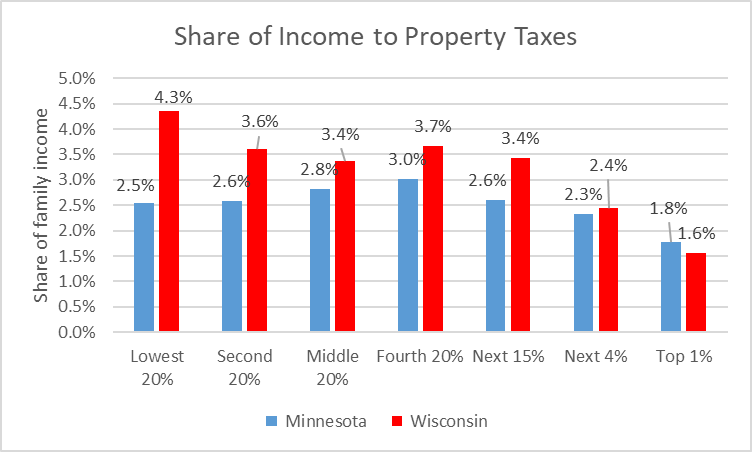 Progressive income taxes can be used to compensate for the natural regressiveness of sales and property taxes. As the next graph shows, Minnesota’s income tax is more progressive than Wisconsin’s. 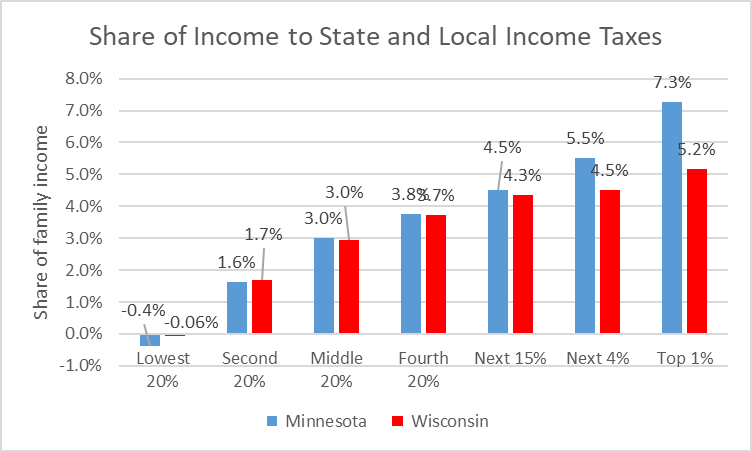 Share of Income to State and Local Income Taxes

When all state and local taxes are considered, ITEP concludes that Wisconsin has the 34th most unfair state and local tax system in the country, better than most, but well below Minnesota’s at 47th. As the next graph shows, in Wisconsin the top 1 percent pay 7.7 percent of their income in taxes, compared to over 10 percent for the 60 percent in the middle. By contrast, Minnesota comes close to a flat tax system, with people at most income levels paying about 10 percent of their income. 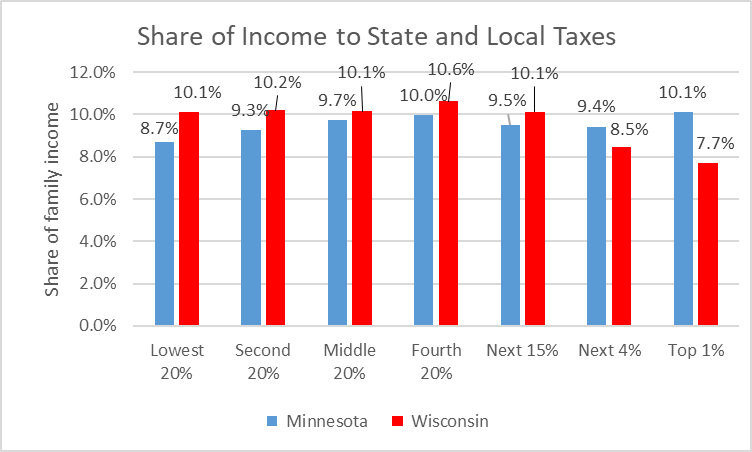 This difference likely contributes to the poor condition of Wisconsin’s transportation infrastructure (US News ranks Minnesota 4th and Wisconsin 32nd). Likewise, many of the struggles of local governments to adequately fund parks or bus services stem from the attitude that low taxes are the secret to prosperity.

MacIver’s staffers like to view themselves as journalists, an idea reinforced by the “NewsMacIver” label. This position would be much more credible if they were willing to incorporate any contrary evidence into their analyses.

One thought on “Data Wonk: Comparing Wisconsin and Minnesota”