Raised twice as much as Democrats in campaign donations in first half of 2019.

By Wisconsin Democracy Campaign - Aug 16th, 2019 12:25 pm
Get a daily rundown of the top stories on Urban Milwaukee

Majority Republicans, who control the Assembly 63-36 and the Senate 19-14, raised twice as much as Democratic lawmakers as of June 30. Republican legislative committees raised $1.47 million from individuals and political action committees (PACs), and Democrats raised about $726,200 during the first six months of 2019.

About half of the $2.2 million raised went to only four committees that are used by Republican and Democratic legislative leaders to milk wealthy special interests for campaign cash to spend on elections. These four legislative campaign committees, which usually raise more than any given candidate committees in any fundraising period, accepted just over $1.1 million in individual, PAC and corporate contributions.

After the four legislative campaign committees, the lawmakers who raised the most in the first six months of 2019 were:

Overall, the $2.2 million raised by legislative committees in the first half of 2019 was higher than the amounts raised during the first six months in most previous odd-numbered years since 2003. 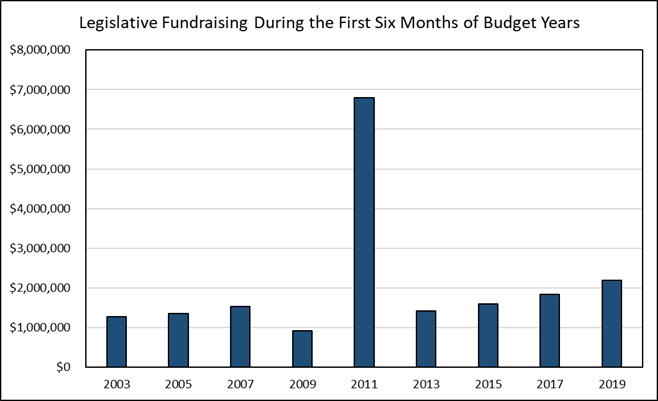 Legislative Fundraising During the First Six Months of Budget Years

Except for 2009 and 2011, legislative committees usually raised between $1.3 million and $1.8 million during the same period in other odd-number years. Legislative fundraising during the first six months of 2011 was unusually higher, about $6.8 million, because nine state senators targeted for recall elections that year were allowed to raise unlimited contributions for several weeks during the six-month period.