By Isiah Holmes, Wisconsin Examiner - Aug 15th, 2019 03:32 pm
Get a daily rundown of the top stories on Urban Milwaukee 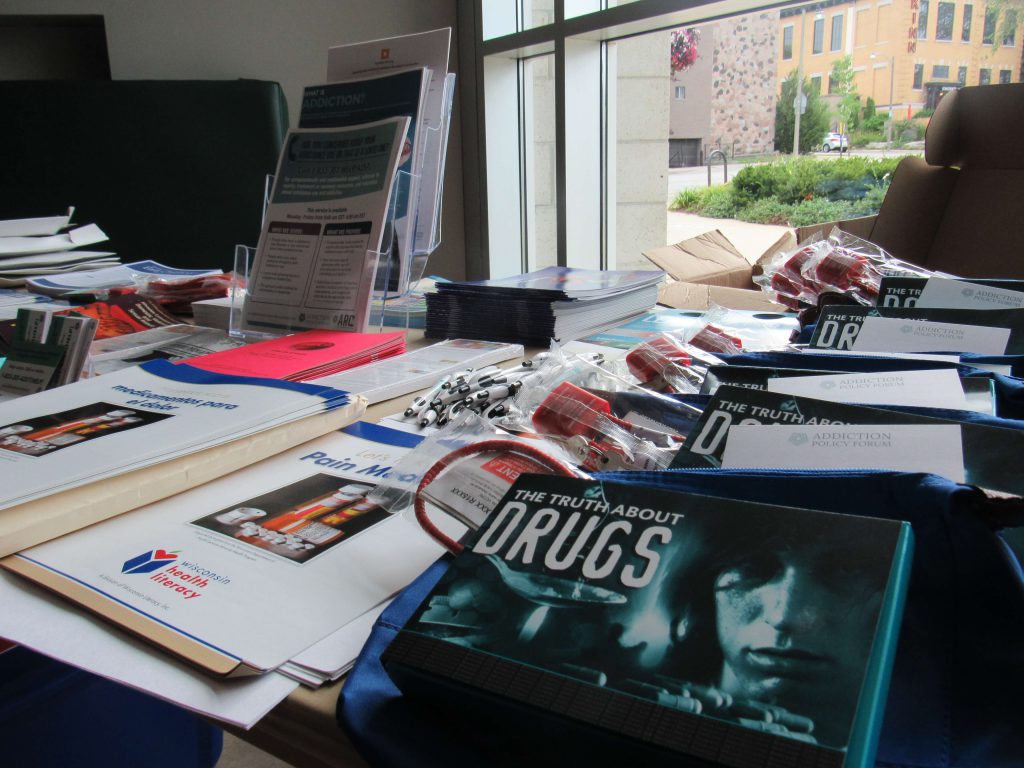 A table filled with information available at the Bay View library for the recovery event. Photo by Isiah Holmes/Wisconsin Examiner.

Michelle Jaskulski, senior director of faith and family programs for APF, presented two power points on recognizing addiction, and stopping an overdose. Like many in the room, addiction has touched Jaskulski’s family personally. 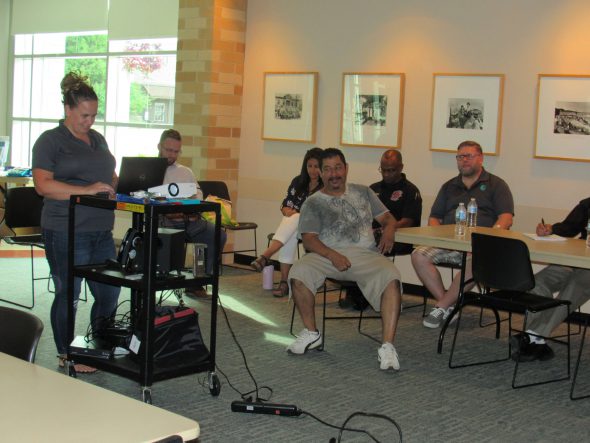 “We have four children, two boys and two girls,” she told Wisconsin Examiner, “and both of our boys dealt with opioid pill and heroin addiction. They struggled for almost six years, they’re both two years into recovery.”

Describing how addiction affects an entire family, beyond just the user, Jaskulski says, “unless you live it you don’t really know what it is.”

Nearly one in three people nationally knows someone who is addicted to opioids or opiates like heroin. Overdoses are now more common than car accident deaths across the country, with Milwaukee experiencing a 600% increase in heroin-related deaths between 2003 and 2013.

Rafael Mercado lost four cousins to heroin and Xanax overdoses before starting the Milwaukee Heroin Diaries. “As much as I come to these, I always leave with new information,” says Mercado. “Like today, we talked about how it affects the brain. We’re getting more and more in depth.”

Opioid and opiate drugs work on parts of the brain controlling emotions, memory, judgment, pleasure and survival. This combination often leads to the brain essentially being hijacked by the drug. Particularly with the onset of withdrawal, or “dope sickness,” acquiring the drug becomes more important than food, water or self-preservation. This, Jaskulski says, makes tough love, shaming and talks of will power pointless when it comes to addiction.

Mercado urges communities to have open dialogues about addiction, and to abandon stigma. After his cousins died, Mercado says he asked his family “why is everybody so embarrassed to talk about this?” They told him, “‘We’re minorities, we don’t do that. It is what it is, and deal with it.’ Well, I was like, ‘No, that’s not right.’”

As a captain with the Milwaukee Fire Department, meeting attendee Michael Wright is all too familiar with the carnage of overdose. “The best thing you can do is understand that anybody can be addicted,” he told the Wisconsin Examiner. “It’s sad to watch young people, who should have 60 or 70 more years to live,” just waste away from addiction, he adds.

Though every shift typically brings about five to 12 drug overdoses, he says, “there’s a lot of overdoses that we don’t see because people are given Narcan.”

Narcan is a nasal spray that contains naloxone, which is used to revive someone who is overdosing. Naloxone is becoming more widely available to civilians who use opioids or people who know active users. The meeting explained key signs of an overdose including blue lips or nails, cold clammy skin, and slowed or stopped breathing. Jaskulski also demonstrated how to administer naloxone through an injection in the thigh. (The drug has no effect on people who aren’t on opioids.)

Place the victim on their side with one leg positioned in front of the other to reduce the chance of them turning onto their stomach, or choking on their own vomit. Make sure that “rescue breathing” is being applied in addition to naloxone. Fact sheets provided at the meeting advise against putting an overdosing person in the shower or standing them up, and to always call for medical assistance even if the naloxone works.

Saving lives with naloxone and providing drug rehab treatment, however, are two different worlds. In fact, revival drugs are sometimes criticized for enabling an addict to use in better confidence and not get off drugs. The informational meeting explored both faith-based and medication-assisted treatment programs.

God Touch is working to get recovering users who are leaving the House of Corrections into six month to yearlong faith-based treatment programs. “We’re working on some initiatives to help the men in the program that are married, or have girlfriends and children, to be able to get the families back together,” says Ganiere.

On the other side of the coin is Community Medical Services (CMS), an outpatient program providing medication-assisted treatment options. Drugs like Methadone and Suboxone are used to prevent the onset of withdrawals and cravings. Contrary to popular belief, this does not mean that the person is trading one drug for another. CMS director of community engagement John Koch stresses these medications, “stabilize the brain,” allowing users to go about normal lives caring for children, working jobs and continuing treatment. Select patients also have the option for Vivitrol shots, which block the effects of opioid drugs on the brain.

He says it’s important to treat people, “with love and respect no matter what they’re going through.” This stigma also affects the narrative around and application of medication-assisted treatment programs. A long-term recovering user Koch confesses, “I took a lot from this world. It’s really cool for me to give back today, and to make a difference in people’s lives.”

Over 12,000 people have been treated by CMS, which has a clinic in the West Allis suburb of Milwaukee.

Although few people come to the meetings, Mercado reaches an audience via live streaming events. “Lots of people see it,” he reports with a smile. “They watch. No matter what the count is, we keep coming. If we can save but one person, that’s a start.”