By Melanie Conklin, Wisconsin Examiner - Aug 13th, 2019 01:10 pm
Get a daily rundown of the top stories on Urban Milwaukee

Two years ago a neo-Nazi sped his car into a group of peaceful protesters in Charlottesville, Virginia, killing Heather Heyer and injuring dozens of others.

This week, copies of the Southern Poverty Law Center (SPLC) “Hate Map” tracking hate groups throughout the United States, arrived in mailboxes of its supporters.

In Wisconsin, SPLC is now tracking 15 hate groups. This includes anti-Muslim groups, neo-Nazis, an anti-LGBT church, Black Nationalist and White Nationalist organizations. Seven of the 15 organizations are statewide. Others in Wisconsin are located in Monroe, Milwaukee, Oostburg, Fitchburg, Hudson and Shawano. 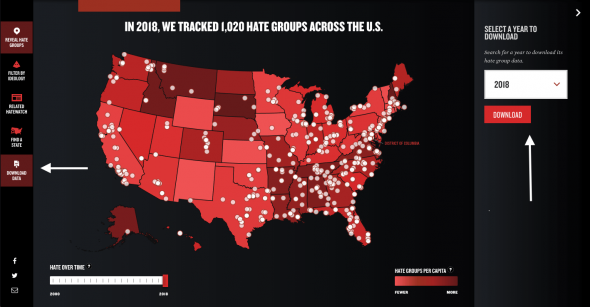 The 15 named organizations puts the number of Wisconsin groups higher than neighboring states Minnesota and Iowa, but at about half of the number operating in Illinois and Michigan. The number nationwide totals 1,020 SPLC-cited hate groups.

The map, updated earlier this year for all of 2018, shows a 30% rise over the four-year time span coinciding with President Donald Trump’s campaign and presidency.

SPLC communications associate Bob Hopkinson notes that his organization’s expertise is primarily specific to groups and ideologies rather than individual states, but he points to another map where SPLC tracks hate instances by state. The ‘Map of white supremacist flyering in the U.S.‘ gleans its information  from news articles, social media and tips submitted to the SPLC on hateful flyers and banners displayed and distributed.

On this map of overt displays, Wisconsin accounts for 27 out of 2445 incidents nationwide, with a spike in incidents in  April and May of 2019. Since the beginning of 2018, 27 flyers were reported in Wisconsin, three of them displayed on college campuses. The number includes 19 from Patriot Front and three from Identity Evropa. 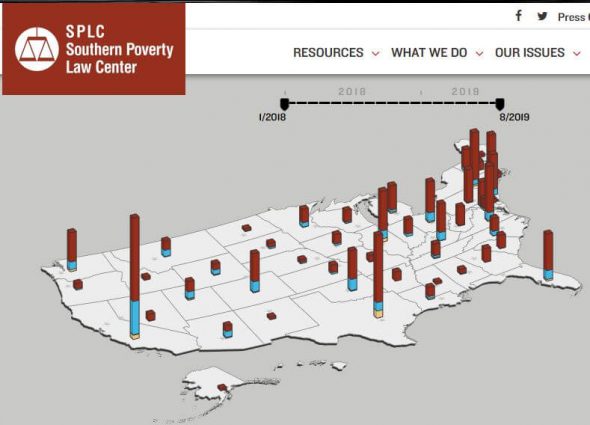 “We’re at a particularly dangerous time in our country,” wrote SPLC’s Chief Development Officer Ed Lord in a July 29 letter sent with the map. “Trump has energized the radical right, and many white supremacists are beginning to lash out in violence…As we approach the 2020 election, I fear that we’ll see more violence like we did in the weeks before the midterms.”

And on the two-year anniversary of the Charlottesville homicide, SPLC Interim President Karen Baynes-Dunning released this statement accusing Trump of normalizing hate as a political weapon:

“Since then, we’ve heard President Trump continue to pour fuel on the growing flames of hate. We’ve heard him continue to feed the grievances of white nationalists by using words that dehumanize and vilify people of color.”