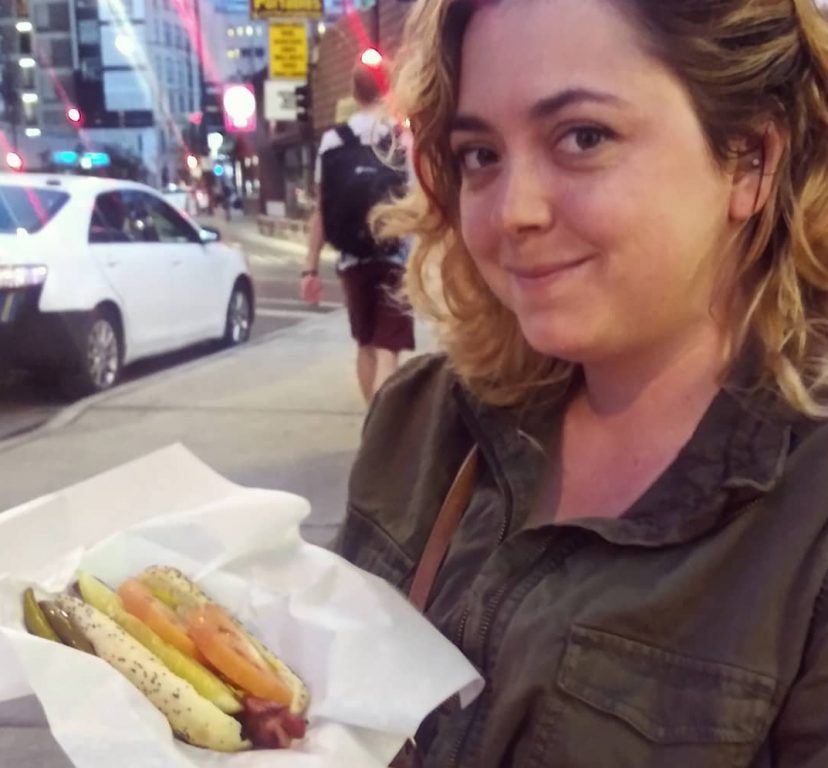 Madison Butler with a Chicago-style hot dog in the Windy City. Image from Rail Passengers Association.

Madison Butler might have the best internship in America.

She’s in the middle of a 50-day trip that will take her from Portland, ME to San Francisco, CA via train. Along the way she’s stopping to visit great restaurants, sample local cuisine, meet local transit advocates and build visibility for the connective potential of America’s passenger rail network.

The Kentucky native’s summer internship is with the 25,000-member Rail Passengers Association. The non-profit advocates for better rail passenger service on behalf of the 40 million passengers in the country.

“I joke around that I’m probably too old to be an intern, but this is probably the coolest internship ever so I had to,” said Butler who graduated from the Auguste Escoffier School of Culinary Arts two years ago.

I met with Butler and RPA field coordinator Joseph Aiello at Brudd Cafe (the former Uber Tap Room) attached to the Wisconsin Cheese Mart. The duo had arrived in Milwaukee via the Amtrak Hiawatha Service from Chicago as part of a day trip to the city that also included a tour of The Hop’s maintenance facility, ride of the streetcar system and meeting with RPA member Alderman Robert Bauman at St. Paul’s Fish Market in the Milwaukee Public Market.

While discussing the ins and outs of a cross-country journey by train and Butler’s backstory, we shared a Wisconsin cheese sampler while enjoying New Glarus Spotted Cow beers.

“I fell in love with The Hop. It’s really cool to see not only a streetcar come back, but free service,” said Butler who was in the city on a day trip from Amtrak’s Chicago hub.

“I want to show people the first-hand perspective on the adventure,” said Butler. “And not just like is the train accessible, but if there is a delay, why is there delay? It’s because of the freight companies that control the lines. Or how the service in the Northeast Corridor is drastically different than the service we have in the south.”

The internship isn’t all glamour by rail. While working for the organization in Washington D.C. she had to run to deliver printed testimony to a representative of the organization speaking in front a Senate committee. She’s also working on a comprehensive survey of passengers regarding their interests in meals on Amtrak’s long-distance trains. She’ll present her findings to RPA and the Amtrak representatives in late August.

“I think it’s very easy for people to stay at home and be a keyboard warrior,” said Butler. “It’s another thing to create data, tangibly extract and analyze the results of a survey and leverage that into negotiations. That’s what I want to do at the end of August.”

What’s next for Butler beyond advocating for better food? Despite being a trained chef and having worked in the industry both before and after going to culinary school, she wants to stay in advocacy. “I would preferably like to remain in the south and become an accessibility coordinator in the southern region from the Delta to Appalachia,” said Butler. She added that food plays a key role in bridging divides. “You can’t fight someone while you’re eating dinner.”

She cited Greenwood, MS as a city ripe for improvement. “They don’t even have a bus going from downtown to the factories,” said Butler.

Butler cited the economic development around Meridian, MS’s new multi-modal station as an example of building wealth and accessibility for all through connectivity.

Similar to RPA’s Summer 2018 intern Jacob Wallace, Butler didn’t have much knowledge of Milwaukee before visiting. “I didn’t really have any thoughts,” said Butler on Milwaukee. Wallace toured the country via rail in an effort to visit as many baseball stadiums as possible.

Milwaukee aside, what’s the best thing Butler has eaten on her journey? The soul food at Mert’s Heart and Soul in Charlotte, NC.