Milwaukee rollout "could be today" or "next couple of days... It's imminent," says Lime rep. 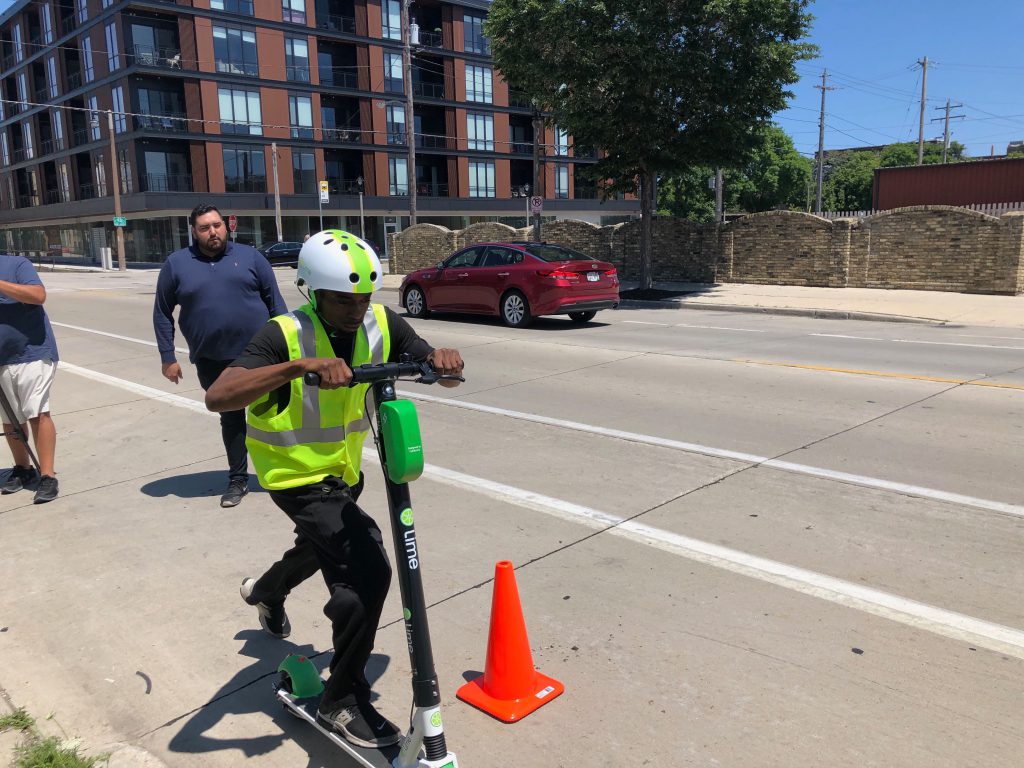 A Lime employee demonstrates how to ride a scooter. Photo by Jeramey Jannene.

The company is one of three currently working with the Department of Public Works on acceptance into a pilot program to allow up to 1,000 scooters to operate in targeted zones. Lime intends to deploy 500 scooters initially following the approval of its application.

“It could be today, it could be tomorrow, it could be in the next couple of days. It’s imminent. We’re finalizing some last bits and pieces to get up and running,” Nico Probst, Lime’s Midwest director of governmental relations, told Urban Milwaukee. He praised the city’s quick turnaround on approving a legal framework for operation following the state’s approval.

The Milwaukee Common Council authorized the program on July 9th after Governor Tony Evers signed a bipartisan bill into law on July 8th.

The program allows companies to place up to 350 dockless scooters each in an area east of Interstate 43 running from W. Oklahoma Ave. north to the city limits near W. Capitol Dr. that includes Downtown, the East Side, Brewers Hill, Bronzeville, Harambee, Bay View and a special cutout west to N. 22nd St. for Marquette University.

The companies would be able to place additional scooters, bringing each company’s total fleet size to 750, in two additional zones which encompass the rest of the city and are roughly divided by Interstate 94. Scooter fleets would be allowed to increase to 1,000 in size if certain performance metrics outlined in the pilot study, including utilization, are met.

But what will Lime do about concerns about sidewalk riding or misparked scooters? “Having a local team that can respond to issues in real time is the most important thing we can do to address issues,” said Probst. He told Urban Milwaukee that Lime will have a team of 15 locally. “Also at the end of the ride you have to take a picture of where you parked your scooter,” said Probst. “That sends a nudge about how you park your scooter.”

The local team will also work with riders on appropriate riding behavior. “We know this is a new technology. We want to have those conversations with riders directly,” said Probst.

Probst said Lime will also be a good partner with its “Juicers,” independent contractors that pick up scooters every night and charge the vehicles. He said coffee shops and other businesses that rely on foot traffic could earn extra income by charging the vehicles at night and drawing customers in the morning. “It’s an easy way to make some money,” said Probst.

Why pick Lime over Bird, Spin or other possible entrants? “We think that our scooters are really robust, safe and durable,” said the government liaison. Probst said availability and community outreach will also differentiate Lime from its competitors.

Lime also hopes to be a good partner with the city, including providing ride data to help identify problem spots. “We want the city to see where the rider are occurring,” said Probst. “The hope is that the city can think about additional infrastructure as time goes along.” He said sidewalk riding often happens as a result of fears of street riding with mixed traffic. “Maybe it’s not a just a bike lane itself, but a protected lane, because that’s the easiest, best use case for our riders.” Under state law scooters are allowed to go up to 15 miles per hour on public streets. 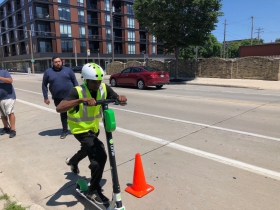 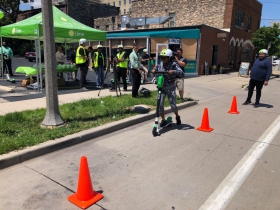 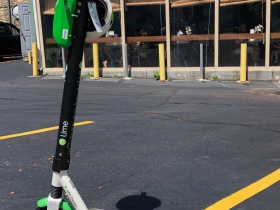 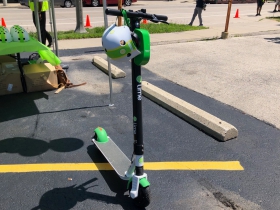