They do at Boston's airport. Why not at Milwaukee's?

Would you like to save money and skip to the front of the security line the next time you fly?

Passengers at Boston’s Logan Airport will soon be able to do just that as part of a proposal to improve the efficiency of the airport. Riders who take the Logan Express bus line from downtown Boston will be given a ticket to skip to the front of security checkpoint lines at the congested airport. The move comes after Massachusetts Port Authority recently approved a ban on curbside dropoffs from Lyft and Uber during peak periods, instead redirecting them to a dropoff point.

“By making Logan Express more attractive, we want more passengers to choose these options and help us reduce the traffic congestion we’re experiencing in and around the airport,” said Ed Freni, aviation director at the Massachusetts Port Authority, to the Boston Globe in April. “Adding the priority line at the checkpoint is a great opportunity for people to move quickly.” Fares on the Logan Express have been cut from $7.50 each way to $3 for a round trip.

Could such a perk work in Milwaukee? There is certainly plenty of capacity on the two Milwaukee County Transit System routes that serve Milwaukee Mitchell International Airport.

MCTS provides only 270 rides to or from the airport on an average weekday, many of which are taken by airport employees commuting to work. In 2018, the airport had 19,443 combined daily boarding and alightings from flights, including passengers on connecting flights. As of 2018, bus ridership at best serves 1.4 percent of Milwaukee’s airport boardings.

And while Milwaukee’s airport has far less congestion than Boston, the cost savings to passengers could be significant.

A roundtrip from Glendale to the airport would cost a solo passenger over $50 via Uber or Lyft, while the same trip on MCTS would cost $4. Yes, the bus trip takes longer, but skipping to the front of the security line could save a substantial amount of time and alleviate one of the worst parts of flying.

MCTS has already taken a handful of steps to make the experience more welcoming. Riders can purchase fares from a vending machine in the baggage claim and watch a real-time countdown clock to see when the bus next arrives. Signage has been added to the airport in recent years to guide passengers to the bus stop.

If Milwaukee County, which owns and operates both the airport and transit system, wants to save passengers a lot of money and increase the use of its buses, adopting the Boston approach and launching a marketing campaign for the change could pay dividends. 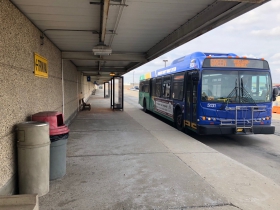 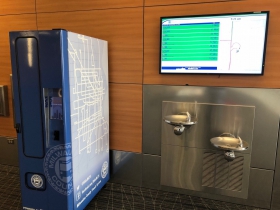 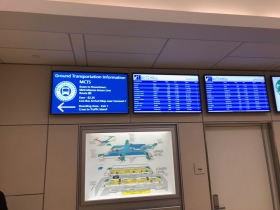 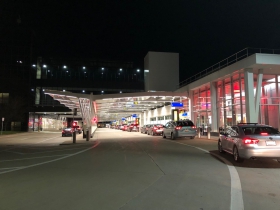