By Allison Dikanovic, Milwaukee Neighborhood News Service - Jul 15th, 2019 11:48 am
Get a daily rundown of the top stories on Urban Milwaukee 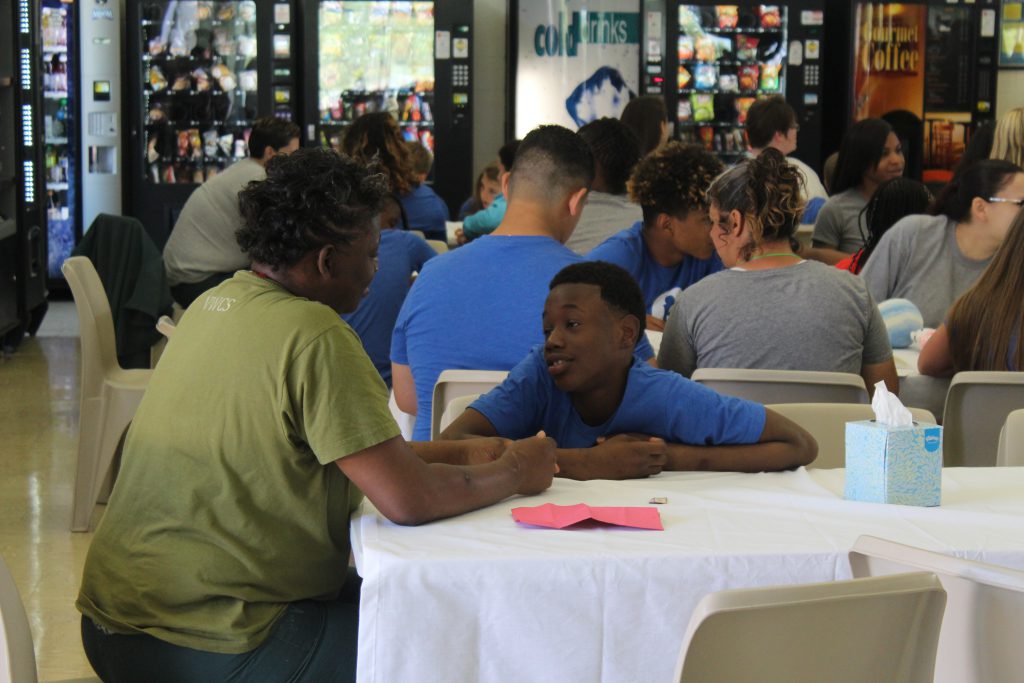 Children and mothers got to interact more organically at Camp Reunite than at typical prison visits. Photo by Allison Dikanovic/NNS.

Editor’s note: To protect the privacy of the children included in this story, Camp Reunite requested that NNS only use first names for campers.

Bridget Davis eagerly waved one hand in the air and wiped a tear from her eye with the other one as a yellow school bus pulled up in front of Taycheedah Correctional Institution. Her son Lawson was on the bus, and the last time she saw him was more than a year ago, when she dropped him off at school.

Davis was sentenced to nine years in prison for “selling a small amount of drugs.” Her son hadn’t been able to visit her since she’d been incarcerated, but she said she has written him letters every Sunday, updating him on things like her success in cosmetology classes. Now, he was getting to visit her at the prison along with 49 other children whose mothers also are incarcerated as part of a program called Camp Reunite.

More than 5.1 million kids have had a parent in jail or prison in the United States, including 88,000 in Wisconsin, according to research published by the Annie E. Casey Foundation. Parent incarceration can have short and long-term effects on a child, and it disproportionately affects children of color.

Now in its second year, the week-long Camp Reunite partnered with Taycheedah in June to provide a bonding opportunity for children and mothers and a fun, healing camping experience for the kids.

“He’s so tall!” Davis said, without averting her gaze from the line of children filing off the bus beyond the barbed wire fence in the distance. “I can’t believe it. He looks like he grew three feet this year.”

Feleesha Bruette put her arm around the woman next to her. “I love seeing us like this, crying and stuff,” she said. “This is the real us, the mothering us.”

The 28 women at Taycheedah who were chosen to participate in Camp Reunite had been preparing for more than a month for their kids’ arrival. They created a carnival in the outdoor visiting area of the institution, complete with games, crafts and prizes that included stuffed animals they and other women had crocheted.

Bruette stitched each of her three children intricately beaded necklaces as gifts. As a registered member of the Mohican tribe, she said she learned how to bead as a child in boarding school.

Bruette said she has been in and out of prison and struggling with addiction for the past five years. She said it has been hard to miss certain milestones for her kids, such as their birthdays.

“It does hurt,” she said. “I’ve realized in the last few months, specifically the past six months or so, that my kids have been struggling emotionally through my incarceration.”

Kids face many challenges when a parent goes to prison. Bruette’s children moved in with their grandmother outside of Green Bay. Lawson, Davis’s son, moved from Eau Claire to Milwaukee to live with his aunt.

Julie Poehlmann-Tynan, a professor of human development and family studies at the University of Wisconsin-Madison, has been studying how parent incarceration affects children for more than 15 years. She described the experience as a “forced separation” that can cause sadness, intense distress, developmental regression, anger and confusion in the short term.

Longer term, she said, the experience can lead to behavior problems.

Poehlmann-Tynan said one of the most important things for kids is to be able to build a positive relationship with their incarcerated parent.

“Parental incarceration is going to be traumatic, but how can we address that while it’s going on instead of waiting for the effects later on?” said Kenzie Kacmarcik, senior researcher and program designer for Camp Reunite.

Bruette, who will leave Taycheedah and move to the South Side of Milwaukee in about five months, said Camp Reunite has given her the chance to begin to repair her relationship with her children.

“I can dig into their little feelings and learn more about what they go through out there, how they feel,” she said.

Kayliahna, Bruette’s 9-year-old daughter, said she had been counting the days in anticipation of Camp Reunite.

In order to make the family visit more special, Taycheedah amended many of its usual rules for visits and decreased certain security measures.

“They might be able to go to a vending machine to get a bag of chips or a soda at a normal visit, but that’s really it, just visiting across a table,” said Sarah Cooper, warden at Taycheedah. “With Camp Reunite, we’ve completely relaxed those rules.”

Bruette got to braid Kayliahna’s hair, something she said she used to do every morning but runs afoul of prison visitation rules.

Davis got to throw around a football with Lawson, when they would otherwise have had to stay seated at an assigned table.

“It’s like they’re interacting in a natural state of mother and child instead of in a highly controlled space,” said Poehlmann-Tynan, who studied and evaluated the success of last year’s camp. “That’s so important for kids. They don’t understand all the rules. They just want to see their mom.”

Cooper said the partnership with Camp Reunite made sense for Taycheedah, because it aligns with its goal of preparing the women for a successful release and reminding them of the people who are counting on them back home.

“I think that this experience really helps them mentally and emotionally plan for releasing and taking back custody of their kids and being able to provide their kids with a loving, nurturing, safe, clean environment,” Cooper said. “They see here how they get to spend this time with their kids, and it means so much to them.”

Hannah Weisbecker, a recreational therapist at Taycheedah, said this experience is therapeutic.

“When women are incarcerated, they’re caregivers at heart, and you know, when that’s taken away from them, a lot of their self-worth and their purpose is taken away in that sense,” she said. “So, this kind of brings that back together, and brings that to light that, ‘Hey, I’m still a mom, even though I’m here. I did something wrong, and I’m doing my time, and I’m still a mom.’”

Bruette said during the visit, she got to laugh and goof around with her kids. She witnessed them get upset with each other, and with her, which she said was actually a “beautiful experience” for her.

“My kids need me, and they’re hurting like that not for any reason other than me being away and me not putting them first and not being there for them,” she said. “So, they have every right to feel this way. I’m very thankful to have this opportunity to see these emotions, because I don’t always see them.”

“It definitely gives me motivation to make this my last incarceration,” she said.

Tears flowed when the kids had to leave Taycheedah.

The giggles that filled the visiting area dissipated as the children returned to the bus and the women had to line up to be counted, a regular prison security measure.

In addition to normal summer camp activities, the camp is staffed with social workers and includes wellness activities such as music therapy and group discussions that are focused on helping the kids process their emotions.

For many of the campers, this was the first time they’ve been with other kids who share their experiences.

“It makes me feel not lonely because I’m not the only one who has a mom in jail,” Kayliahna said. “And to look around and see all these kids, and their moms are in jail, it’s just crazy.”