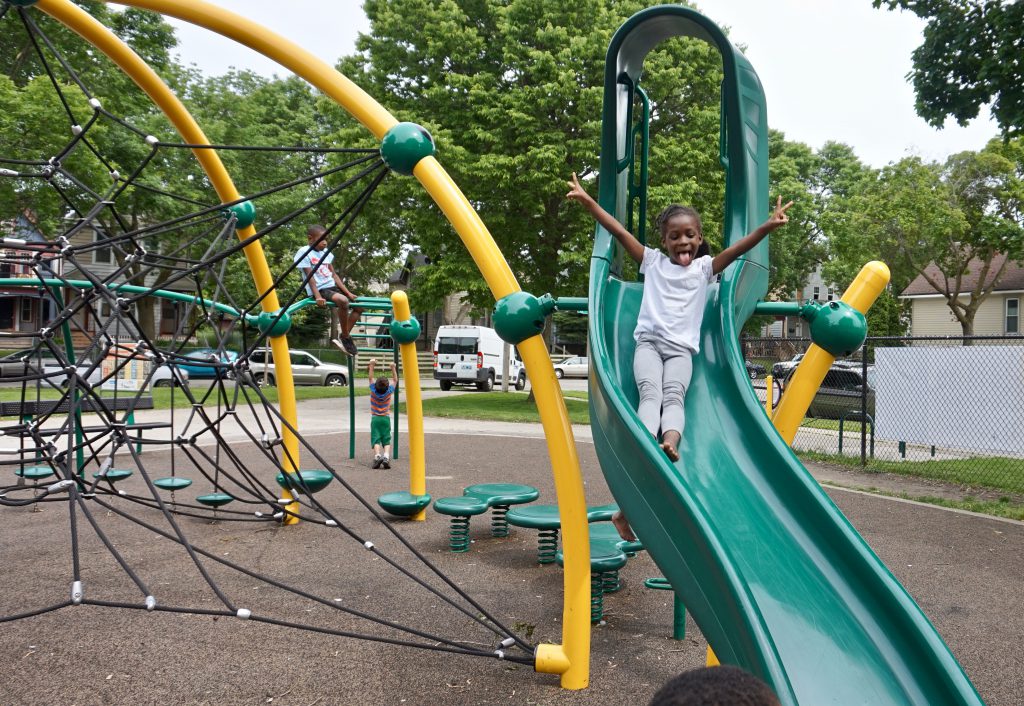 Denaja Shackelford, 5, lets loose on the slide at the Clarke Square playground, which was renovated by the county in 2013. Photo by Andrea Waxman/NNS.

Six years ago, Milwaukee Public Schools’ play and sports areas were called out for being among the worst in the county.

Since then, MPS has invested $12 million in rebuilding, renovating and making improvements to its outdoor athletic and play facilities.

“These investments are about leveling the playing field. In the suburbs, a state-of-the-art stadium is a given, but in Milwaukee it’s not,” said Andy Nelson, media manager for MPS.

MPS is in the middle of “a massive investment” in playgrounds, Nelson said.

Nelson said MPS is partnering with the Milwaukee Metropolitan Sewerage District, the city Department of Public Works and Reflo, a nonprofit, to create more green spaces.

MPS, along with community partners and funders, will announce a multimillion-dollar investment in schools and neighborhoods on Tuesday, July 9 that focuses on increasing green spaces at four schools, tree plantings, adding outdoor classrooms and updating curriculum to include ecology, sustainability and freshwater sciences.

Wendell Willis, who served as MPS chief operating officer for two years beginning in 2015 and now heads the MPS Foundation, said that since January, MPS has received $217,000 in private donations to help with above-the-groundwork in four schools that are part of  Reflo’s Green Schools Consortium.

The project will cost about $1.5 million. The rest of the money comes from the Department of Public Works, MMSD, Fund for Lake Michigan and the city, state and federal governments, Willis said.

The renewed interest in MPS playgrounds and green spaces stands in contrast to a 2013 Common Ground survey that found the majority of outdoor athletic and recreational facilities at public schools throughout the county to be sub-par.

Common Ground is a nonpartisan advocacy group made up of faith communities, small businesses and individuals. 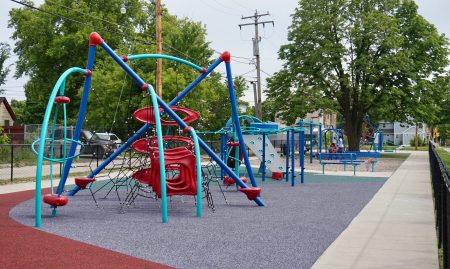 The playground in Phillips Park on North 17th Street was the second to be renovated by MKE Plays. It was completed in 2016. Photo by Andrea Waxman/NNS.

Officials say, however, that the investment in playgrounds and other facilities has nothing to do with Common Ground’s study.

Willis said the improvements are important for the community.

“It’s a significant amount of money that‘s been spent in the last several years on the infrastructure needs and providing students with what typically the suburbs” have,  said Willis, who noted there is still more work that needs to be done.

Since 2013, the school district has rebuilt four high school stadiums on the North and South sides.

In 2014, Milwaukee Recreation created a $25 million, 10-year plan to address its playfields, which, unlike MPS playgrounds, are open to all community residents.

Until recently, the playfields had only received small-scale repairs over the 30 years Senior Director Lynn Greb has been with the department. There were problems everywhere, including cracked asphalt, broken swings, overgrown trees and basketball courts with no hoops, she said.

Milwaukee Rec, which provides programming at schools as well as city and county recreation sites, manages 52 playfields. Its staff talked with residents and students about their needs and preferences before designing and constructing the upgrades, a process that has taken three years for the first three playfields, which are being completed this summer.

Greb said Milwaukee Rec has raised money from government and private sources to supplement public funds to pay for the improvements.

Beginning in 2014, the city has rebuilt 12 of its playgrounds and will complete three more by the end of 2019, said Joe Kaltenberg, MKE Plays program coordinator.

Ald. Michael Murphy spearheaded MKE Plays, an initiative to improve city playgrounds, in 2015 when he was Common Council president. 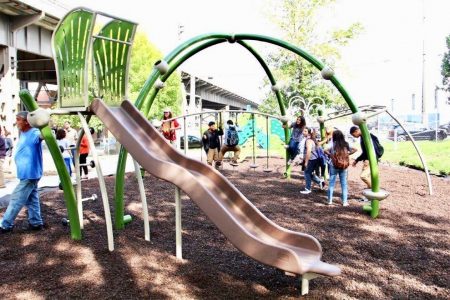 Because his immigrant parents could not afford to travel, the playgrounds became his vacation spot and a highlight of growing up on the West Side, Murphy said.

Starting with a $300,000 grant from the Zilber Family Foundation, MKE Plays has raised $1.8 million in state, federal and foundation grants and combined it with the same amount in city funds to renovate and rebuild city playgrounds, Kaltenberg said.

MKE Plays initially targeted for renovation the 12 most dilapidated of the city’s 52 playgrounds in its 62 parks, as assessed by the Milwaukee Department of Public Works. It began with the Arlington Heights playground in Silver City.

Katie Taylor lives three blocks from Phillips Park playground at North 17th Street., which MKE Plays renovated in 2016. She was watching her three grandkids play there on a recent Friday afternoon.

“It’s a whole lot different here,” since the renovation, Taylor said. Pointing to a boarded-up house, she said, “It looked like that — raggedy, tore down. They did a good job on this park — 1000 percent.”

Because it can cost $300,000 to $400,000 for a typical playground renovation, Milwaukee County has only been able to renovate one or two each year since 2013, said Ian Everett, communication manager for the Parks Department. Eleven county playgrounds have been renovated or improved since that time.

At some locations, such as Garden Homes Square, improvements were limited to replacing harder playground surfaces with kid-friendly poured-in-place rubber, said Sarah Toomsen, manager of planning and development for the Parks Department. There are 113 playgrounds in county-owned parks.

‘More for the kids’

She drove them from their home near Moody Park in the Amani neighborhood because she feels that it’s safer on the South Side, she said. The Clarke Square playground, located in a county park, was rebuilt in 2013.

Shackelford likes what the county did with the Clarke Square playground, including installing softer rubber surfaces.

“There’s more for the kids to do now because a while ago it was broken swings, but now they’ve got monkey bars and the slide.”