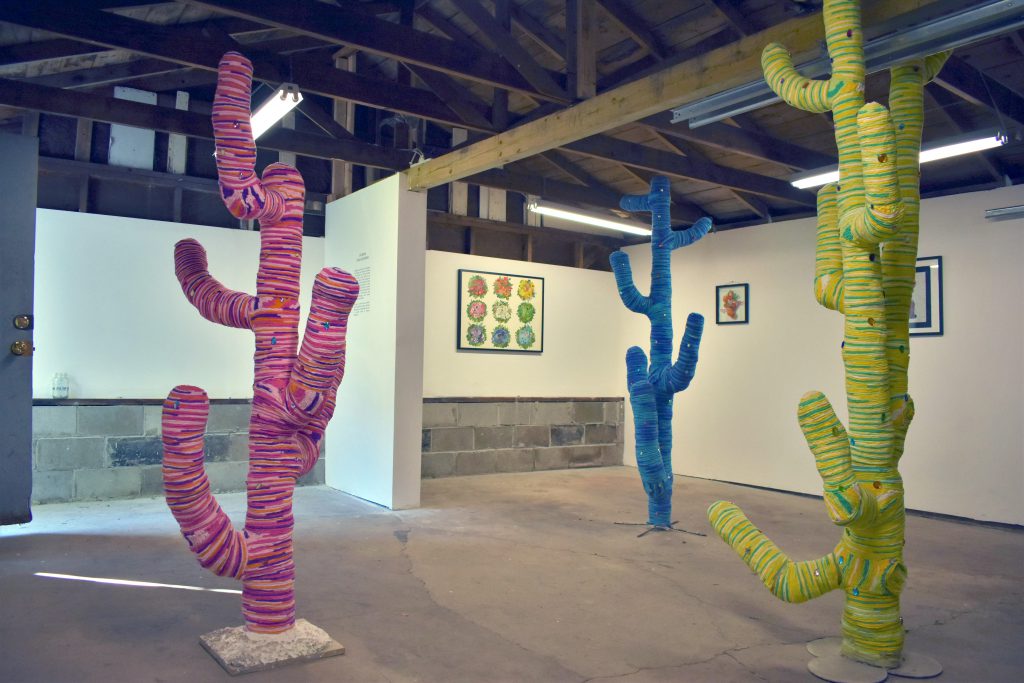 Gluon Gallery. Cactus sculptures, entitled “Kactis”, are by artist Jas Mora, and work on the walls by artist Chad Alexander. Photo of gallery by Brendan Murphy.

You might say the Gluon Gallery started as an empty garage.

And then two young artists worked hard on a do-it-yourself project,  transforming their empty garage into a traditional, white-wall art gallery in Riverwest that now exhibits (mostly) two-person shows by young and emerging artists.

The gallery’s creators, Joe Acri and Sally Nicholson, besides working on their own art (and in Nicholson’s case continuing her studies at MIAD), also created, own, and curate this unique art space behind their house in Riverwest. The gallery opened in the summer of 2018 and and since then has put on numerous two-person shows. The latest, “Qualeasha Wood,” opens Saturday, July 6th and will run through July 22nd and is a departure, a solo artist show. You can find the full list of past exhibitions at Gluon’s website.

Urban Milwaukee caught up with the gallery’s dynamic duo, and talked with them about their tireless, guerrilla-style efforts to promote art and introduce Milwaukee to young and emerging artists, usually two at a time, who haven’t had much exposure. 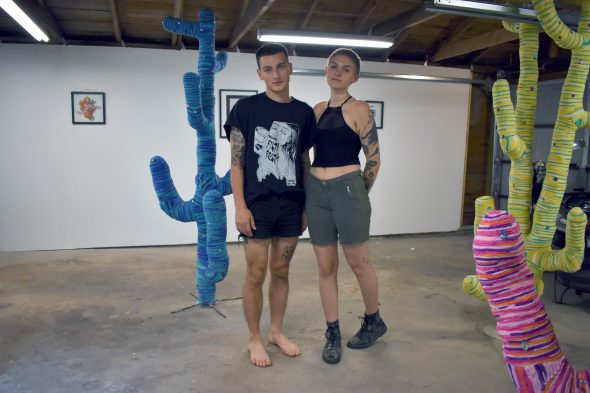 Q: For those of us who may not be quantum physics enthusiasts, what is a gluon and why did the two of you name your gallery after it?

Sally: Joe that’s all you (laughs).

Joe: Ok, so in physics there are sub-atomic particles, those particles are basically just floating massless energy that need to be bonded together to transfer the energy into something that can then create mass within a proton or neutron. So, a gluon is a sub-atomic particle that binds quarks together, which are the building blocks of atoms, which make up all matter. What we do is take the energy that two different young artists have and put them together, so they can build something together outside the walls of institutional critiques.

Q: How did you decide to transform your garage into an art gallery?

Joe: After living [in this house] for two years we wanted to do something with the space and having been someone who facilitates art events and shows for the last couple of years, I was excited about something new that had a little bit more ownership. I had this garage when I moved in and we weren’t using it, the garage doors were all boarded up and it was really just a throw-away storage space. Sally and I got together and cleaned the whole place out and built the walls.

Sally: It was a crash course thing, we did it pretty fast, because we actually scheduled our first event before the space was even ready (Joe laughs). I think it took us about three weeks.

Q: Since you opened this summer you have had two artists in almost every show and a show every two weeks, could discuss your format and why it is important?

Joe: The two-person thing happened before we did any shows, we were trying to figure out what kind of an angle the gallery was going take and how important our brand would be in our programming. It really comes from wanting to be able to give more opportunities to students and people who are early in their career.

Sally: I’m currently a student so just coming from that position, I mean that’s such a vulnerable, but also amazingly malleable time. Four years goes by quickly and there’s a population of kids who have never needed to alter their artist statement for a show, maybe even never had to write one, or never had to package up work for a show. Being an accessible venue where artists early in their career can just have a show is important.

Q: How do you decide which artists to show?

Joe: Each of the two artists must be from a different school or one not in school, and we typically try to match people who don’t know each other. Even though the art scene is open, there are bubbles in the art community and we want to get people out of them and maybe introduce some people and art that they might not normally interact with.

Q: How do you decide which two artists to pair other than different backgrounds?

J: An example would be for our first show with Nicholas Perry and Olivia Rehm: they have mild aesthetic similarities, but they also have parallels where they were in their careers and where they seem to be going. Sometimes we just find them through Instagram or Facebook, it can be a lot of stalking.

Sally: A lot of stalking. It can be all over the place, matching visions as makers or sometimes it is as simple as similar visual/physical attributes in aesthetics, but we aren’t trying to pit them against each other, it should always be a healthy conversation.

Joe: It’s not battle of the bands though.

Q: Where do you see your gallery’s place in the Milwaukee art scene?

Joe: The coolest gallery there is… (both laugh). I was a part of After School Special, which was an artist-run collective and gallery, and when it disbanded I felt there was a void of artist-run DIY spaces putting on a lot of shows.

Q: What has the response from the community been?

Sally: Very positive. I don’t think there are any spaces doing what we do, and the gallery has gotten recognized for that.

Joe: Yeah people seem to love what we’re doing, and we have become known for our programming, with the fast turn-over rate having two artist shows every two weeks.

Q: Who or what was an inspiration for the space?

Joe: “Yeah Maybe” is a space in Minneapolis that I’m very excited about; they have the first floor of a duplex and made it a white wall gallery. While we focus on local, lesser known artists, they focus on bigger names and nationally known people with a much slower turn-over.

Q: What are some galleries in Milwaukee that readers might not be as familiar with that you think they should know about?

Joe: There’s a lot, but some places that put on shows I usually seem to be interested in: Usable Space, Frank Juarez, The Open, Yours Truly (I really appreciate how they operate), and a big shout-out to Real Tinsel.

Sally: Ski Club, The Outlet which I think is funny because the way the gallery is set up is focused on an outlet, that’s what the show revolves around.

Q: Who are some artists you think more people should know about?

Joe: It’s hard to say, because I feel like that’s what we’re doing with the gallery, so… stay tuned! 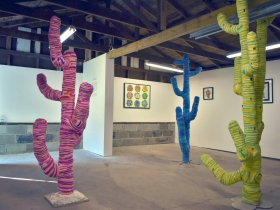 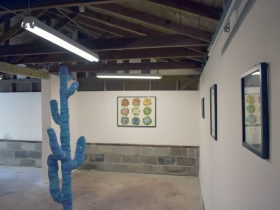 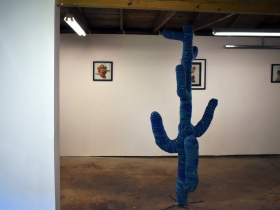 Gluon Gallery is located in the alley behind 2964 N. Holton St. and is open Friday and Saturday from 6 p.m. to 9 p.m. Their latest show presents the fiber and video works of Qualeasha Wood, and opens July 6th and runs through July 22nd.