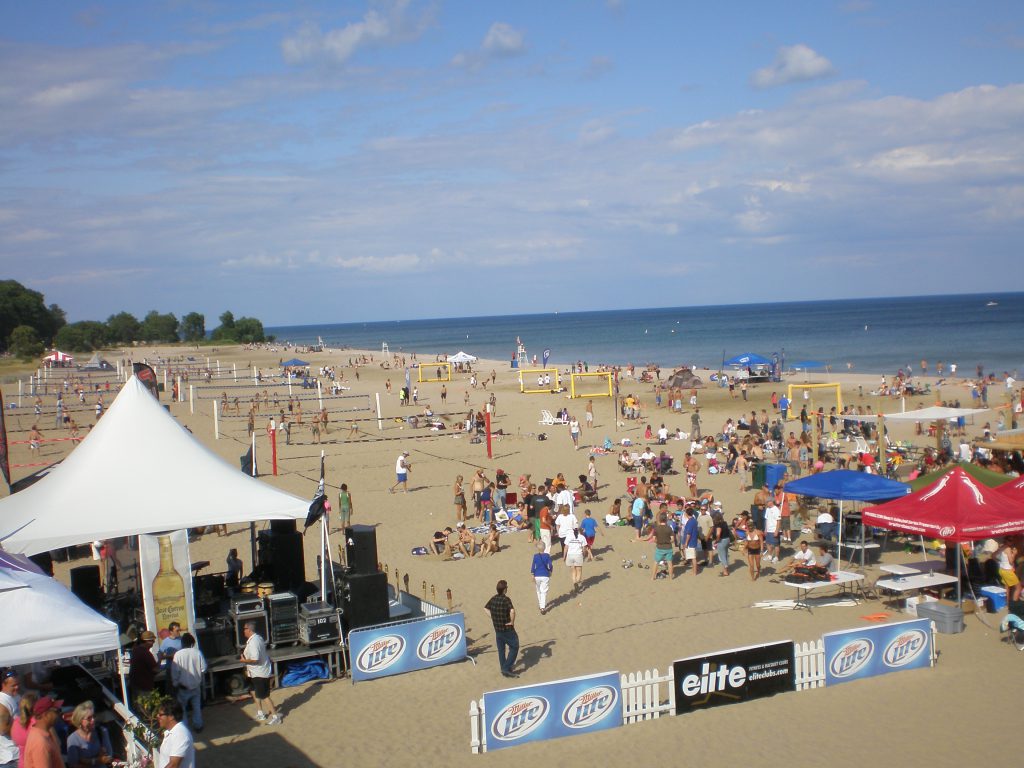 Bradford Beach‘s new food and drink purveyor is finally up and running after a slow and chilly start to the summer. Called The Dock, the tiki bar and patio restaurant officially opened on June 21st.

The Dock will operate the center tiki bar at the beach, along with a nearby covered patio that will open in the coming weeks. According to proprietor Luke Cholodecki, two different menus will serve both concession-stand and sit-down fare. The Journal Sentinel’s Carol Deptolla gives a run-down:

Items like guacamole, chips and pico de gallo, grass-fed burgers and black bean burgers will be sold; the sit-down menu will include seafood items, such as fish tacos made with Lake Superior whitefish.

Prices will range from $4 for fresh-cut fries to around $12 for the tacos; quarter-pound cheeseburgers and Caesar salads would be $6.95 each…

Besides food, the Dock will sell craft beer, wine, cocktails and frozen drinks, such as pina coladas.

The Dock also plans to remodel the beach house, transforming it into a full-service restaurant with a rooftop patio and a “European beach feel,” says Cholodecki. The restaurant is slated to open next year.

The Dock is open from 11 a.m. to 10 p.m. daily throughout the summer, and could stay open into October, weather permitting.

Following the April opening of its first location in Bay View, Fuji Poke owners are preparing to open another restaurant in mid-July or early August. The second Fuji Poke will take over the space at 1426 E. Brady St., which previously housed a Subway restaurant until closing in October 2018.

The Bay View location for Fuji, at 2121 S. Kinnickinnic Ave., also a former Subway, was leased in January. Co-Owner Andy Ni told BizTimes that the Brady Street location was leased at about the same time. Ni co-owns both locations with his parents and uncle.

Fuji Poke offers sushi burritos, hibachi, boba and, of course, poke bowls. Ni says that the Brady Street location will have some seating, but will focus more on takeout because of its smaller size. Bay View’s Fuji is 1,800 square feet, while Brady Street’s is 1,200 square feet. Reporter Maredithe Meyer offered more details on Fuji’s growth:

Although plans were underway to open the restaurant in Bay View, Ni said, he didn’t pass up on the opportunity to lease a space on Brady Street because of its “desirable” location.

Since opening in April, Fuji Poke has seen steady week-by-week growth and staff have received enough training and experience to handle operations independently while the owners expand the business to the East Side, Ni said.

Patrons at Boone & Crockett can now have a taste of cuisine inspired by the Philippines and Asia. The Bad English Asian Kitchen food truck, a name you should be able to remember, opened earlier this month, and is parked at the bar’s patio at 818 S. Water St. in the Harbor District. All of the dishes are nut and dairy free, with vegetarian and vegan options available.

Owner Juneil Cabreza graduated from the Cooking & Hospitality Institute in Chicago with a French pastry degree, and has worked at a number of Milwaukee restaurants and companies, including Izumi’s, Tenuta’s, Honeypie, AP Bar & Kitchen, MOVIDA and Hotel Madrid. Cabreza emigrated with his family to Los Angeles when he was 5 years old, and by age 7 they had moved to this metro area, settling in St. Francis.

Cabreza’s experience as an immigrant, especially the process of learning English, is behind the food truck and its dishes. On Milwaukee’s Lori Fredrich takes a look at the menu:

It features a beef-based variation on Longanisa, a Filipino sausage that’s seasoned with vinegar and a collection of salty, spicy, sweet ingredients). Cabreza cures the sausage for up to two days with pink salt, giving the meat a tender pink coloring and a complex flavor…The burger is topped with a crispy fried egg that adds not only a rich saucy element to the burger, but also a crisp crunch to every bite. That’s topped off with green onions, pickles, garlic aioli and served on a sweet Hawaiian roll ($8)…

There’s also garlic fried rice made with a combination of sushi, black and purple rices flavored with a pungent garlic shallot paste ($6).

The rice forms the foundation for heftier bowls like the beef rice bowl featuring steak marinated in a citrus-soy marinade, house pickles made with green papaya, daikon, carrots and onions and a fried egg that’s ultra-crisp on the edges and underside but creamy with a rich, creamy sunny-side-up top ($10).

The food truck will operate outside Boone & Crockett for the rest of the summer. Bad English is open from 3 p.m. to close Wednesday to Friday, 1 p.m. to close Saturday and 11 a.m. to 6 p.m. Sunday. 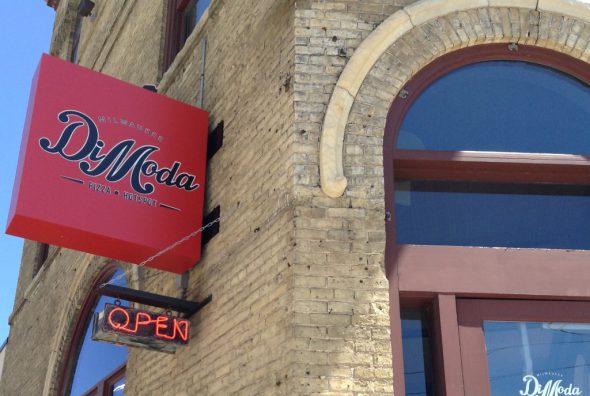 DiModa Pizza (1758 N. Water St.) has revamped its menu, showcasing new pizzas, salads, sandwiches and pasta dishes. A redone list of appetizers include some brand-new offerings, while others hark back to the restaurant’s time as Trocadero. The eatery, which has a dog-friendly patio, also features a few snacks for your furry friends.

Fredrich details some of the new fare:

Among the options is the Menage a Trois, a flashback favorite which was served at the former Trocadero. This trio of spreads includes tomato-based bruschetta spread, hummus and Boursin cheese paired with soft pita triangles and cucumbers (go gluten-free by skipping the pitas) for $12…

There are also options like zucchini fritters served with balsamic honey ($7), a meant-to-be-shared antipasto platter featuring a chef’s selection of cured meats, cheeses, relishes and dips ($18) and creamy cheese dip with smoked mozzarella, grande mozzarella and parmesan baked and served with crostini ($8)…

[T]he restaurant has upped the ante for dog-loving guests with a special dog menu, which features items like “Bowser Beer” (choice of chicken or beef flavoring, $4), Scooby snacks (chicken-flavored Fromm dog treats, $2), and even entrees like a pup patty (burger, $4) or puparoni pizza ($5). If your pup needs a bit more distraction, there are roasted pig’s ears for chewing ($3) or cooling treats like dog-treat-studded peanut butter gelato ($3).