Pot Policies All Over the Map

Fully legal in 11 states, medical pot okay in 22 states, much division over how to handle it.

By Carter Thomson, Wisconsin Center for Investigative Journalism - Jun 23rd, 2019 10:38 am
Get a daily rundown of the top stories on Urban Milwaukee

In 2013, when Robyn took a motorcycle trip to Colorado, she finally was able to find relief for gastrointestinal distress that she had been suffering from for three years.

“When my gut inflames, then my larger joints inflame and so like overnight, I can have my knee the size of a softball and my ankle goes awry and then it can also affect my eyes,” said Robyn, describing the inflammation caused by colitis.

She credits marijuana, which is legal in Colorado, with reducing her symptoms.

Robyn, who lives in northern Wisconsin, travels to Colorado about every six months to restock her supply. It is a risky journey: Although Gov. Tony Evers has proposed legalizing medical marijuana, its use remains illegal in Wisconsin. As a result, Robyn asked that her last name and exact location not be revealed — she has not even told her own family.

“I have enough (marijuana) in the house,” she said, “that they could arrest me.”

She had tried many other things before testing marijuana, ranging from antibiotics to cutting dairy and meat from her diet to a variety of over-the-counter pills.

“I did everything, and nothing, nothing made a change,” Robyn said. “All other roads had closed for me — that’s how I was feeling at the time.” 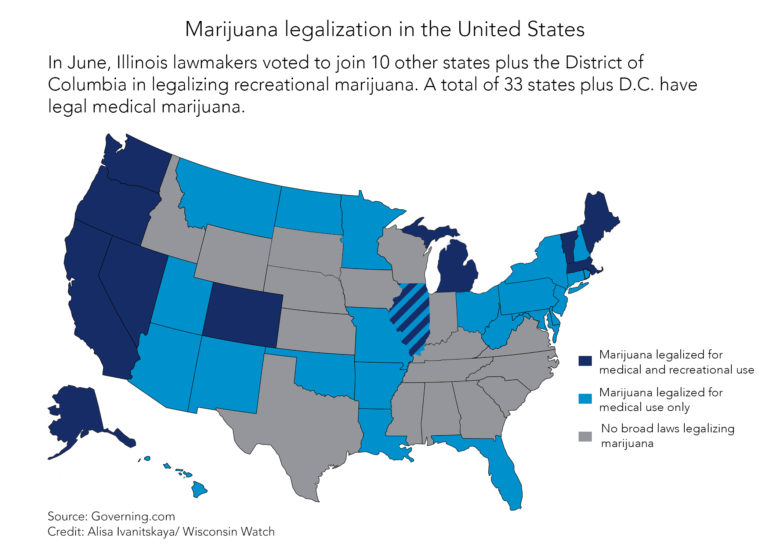 In June, Illinois lawmakers voted to join 10 other states plus the District of Columbia in legalizing recreational marijuana. A total of 33 states plus D.C. have legal medical marijuana.

University of Wisconsin-Madison political science professor Barry Burden said Evers’ election has sparked a more serious discussion around marijuana in the state. But the Democratic governor will have a difficult time with legalization as Republican leaders are pushing back against the idea.

Burden said it is not a purely partisan fight, as “the issue does not divide Democrats and Republicans the way other issues do, so there might be some unconventional coalitions that support and oppose the passage of the Evers proposal.”

Elsewhere, that debate has long been settled. In 1996, California became the first state to legalize marijuana for medicinal purposes. Since then, 32 additional states plus Washington, D.C., have joined in. Eleven of those states, plus D.C., also have legalized marijuana for recreational adult use. In the Upper Midwest, recreational use was legalized by Michigan in 2018, and it is expected to become legal in Illinois in 2020.

Wisconsin has no legal programs for either medical marijuana or recreational marijuana.

Wisconsin allows the use of cannabidiol, or CBD, in a form that does not have the psychoactive effect. CBD is available over the counter in Wisconsin.

There are 11 other states that, like Wisconsin, have CBD-only programs, according to the Cannabis Business Times.

New York and New Jersey both considered but failed to pass proposals for recreational marijuana legalization in 2019. Ohio has a proposed ballot initiative in 2019 for full legalization, while voters in Arizona, Mississippi, Nebraska and South Dakota will likely get the chance to vote on it in 2020.

A 2018 study by Colorado’s Division of Criminal Justice showed few negative effects of legalization. It found marijuana use among juveniles showed no significant changes in the first five years of recreational legalization. Use among minors also was not higher than the national average, which includes most states where recreational marijuana is not legal. 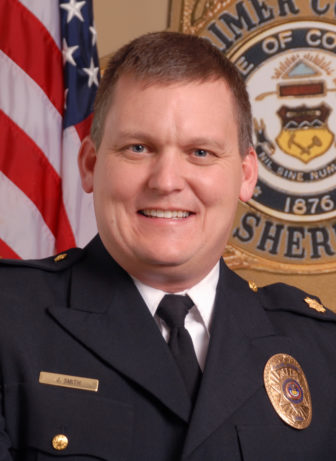 Sheriff Justin Smith of Larimer County in Colorado opposes the state’s legalization of marijuana for recreational use. While a state study found few negative consequences five years after legalization, Smith says he has seen more home invasions in his county related to marijuana and its proceeds. Photo from the Larimer County Sheriff’s Office.

The proportion of driving under the influence incidents involving cannabis increased from 12% to 15% between 2014 and 2017, but overall, citations were down. And while the number of fatal crashes involving people who had cannabinoids in their bloodstream did increase, the authors of the report warned against any historical comparison of crash rates because the state has heightened drug testing since legalization.

Not everyone in Colorado is on board, however. Justin Smith, sheriff of Larimer County, Colorado, said when voters passed Amendment 64 allowing for recreational consumption of marijuana, the notion was that non-users would not be bothered by smoke or other nuisances since the law limits marijuana use to an individual’s home.

But lawmakers recently approved a measure allowing establishments to create “social use” areas for consuming cannabis.

Since legalization, Smith said he has seen a rise in home invasions in his county that are tied to theft of marijuana or its profits. The Colorado report found a 26% increase in violent crimes across the state from 2013 to 2017, including a 22% increase in robberies.

But the report warned that “it is not possible to definitively separate the change in marijuana laws from other changes that have occurred in Colorado, both societal and legal.”