Can Democrats Win the State Assembly?

With right issues, it’s possible, even If districts are still gerrymandered.

If Democrats hope to win control of the legislature they need to identify candidates—and issues—that speak to people living in the small cities, towns and countryside.

In the 2018 election, about 205,000 more Wisconsinites voted for Democratic Assembly candidates than for Republican candidates. Put another way, 54.2 percent of those voting for candidates from the two major parties voted Democratic while only 45.8 percent voted Republican. The same Democratic advantage appears in previous Wisconsin elections—ever since the gerrymander of 2011 which aimed to keep Republicans in power whatever the view of the voters. By simply adding up the statewide vote for Assembly seats, the media often gives the impression that Wisconsin is, on some fundamental level, a blue state.

However, this impression is false. The apparent Democratic advantage is itself a byproduct of the gerrymander. The Wisconsin gerrymander is an extreme example of the standard strategy, commonly called “packing and cracking.” The packing part comes with moving district boundaries to pack more Democratic voters into already-safe Democratic districts. The cracking breaks up districts by moving enough Republican voters into districts that were previously competitive or Democrat-leaning in order to convert them to safely Republican.

The chart below shows gerrymandering in action. The blue columns show the margins of the 36 districts won by Democrat Tony Evers. In the 10 most-packed districts, Evers got over 80 percent of the vote. By contrast, Republican Scott Walker won far more — 63 assembly districts (shown in red) — yet narrowly lost the election for governor. The authors of the gerrymander made sure that there was no district in which the Republican margin exceeded 80 percent 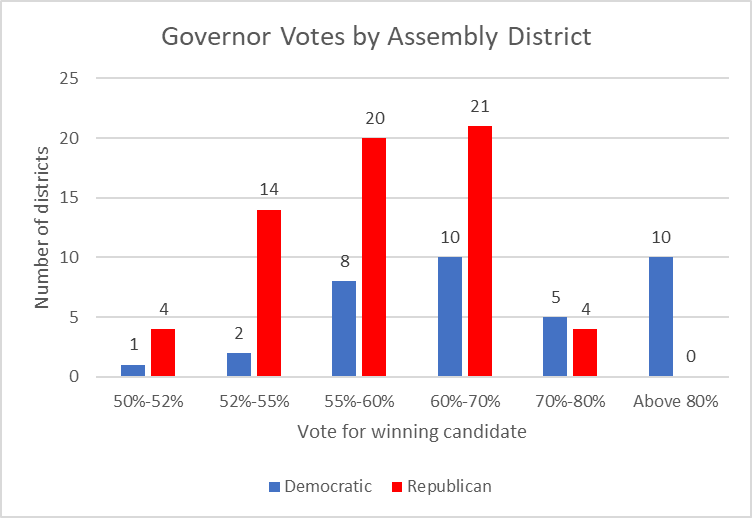 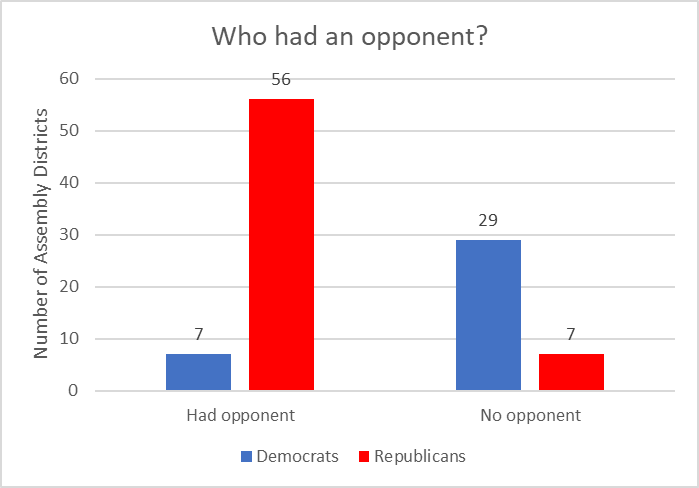 Who had an opponent?

The result is that a Republican-favoring gerrymander leads to a Republican undercount (and a smaller Democratic undercount). As the first two columns in the chart below, in the 2018 election Democrats received 54.2 percent of the total Assembly vote, compared to 45.8 percent for Republicans, but the margin would have been much smaller based on the vote in those districts for governor or U.S. Senator 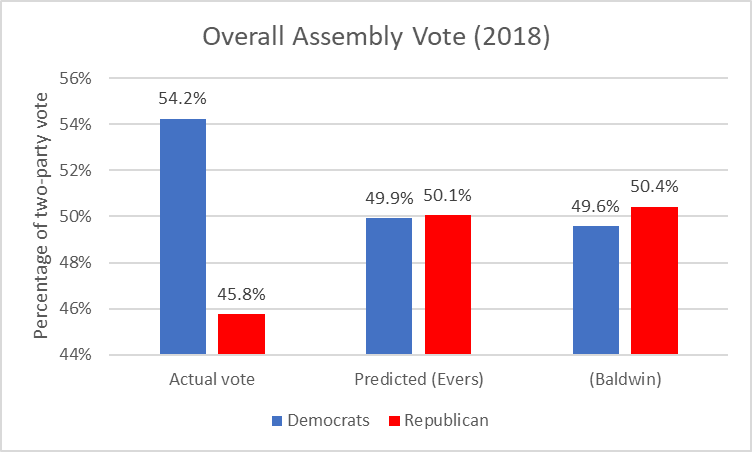 Using the results from those two statewide campaigns gets around the missing candidate problem. For candidates for governor or US senator, every vote is equally valuable no matter where it comes from. First, using the districts where both parties fielded a candidate, one can generate a relationship between the vote for the statewide candidate and that for district candidate. Then use that relationship to estimate the vote in districts missing a candidate. The two middle columns in the chart above show the result using the race for governor. The right-hand columns show the same estimate using the US Senate race. Essentially both show a tie vote, meaning the race for Assembly seats should be very competitive.

The overall message to the Democratic Party is that it needs to emphasize issues that resonate throughout Wisconsin, not just in the areas where Democrats already do well. Even in the most optimistic case for Democrats–that the US Supreme Court rejects gerrymandering—Wisconsin remains a 50-50 state. If the Supreme Court reverses the district court and allows the gerrymander to remain in place, the challenge to the Democratic Party is far greater—to flip the Assembly likely requires successfully appealing to around 55 percent of the voters.

The challenge is made greater because, as an earlier chart shows, most of the Democratic Assembly delegation has no experience running against a Republican.

It has been widely observed that in winning the 2016 Republican presidential primary, Donald Trump ran to the left of most other Republicans, promising to protect Medicare, Social Security, Medicaid and to create a better health plan that would cover everyone. While promising to govern as a populist, his actual government has been far more friendly to plutocrats. The way for Democrats to expand, I think, is to make it clear that they are the true anti-plutocrats.

A recent study from the Democracy Fund Voter Study Group, entitled On the Money: How Americans’ Economic Views Define—and Defy—Party Lines, finds that Democrats are far more united on economic issues than are Republicans. As the chart below shows, Democrats making over $80,000 (shown in dark blue) consistently support a number of measures aimed at reducing income inequality. These include expanding low-income tax credits, raising the minimum wage, mandating paid leave, and increasing taxes on the rich. Democrats making less than $40,000 (in light blue) largely agree. 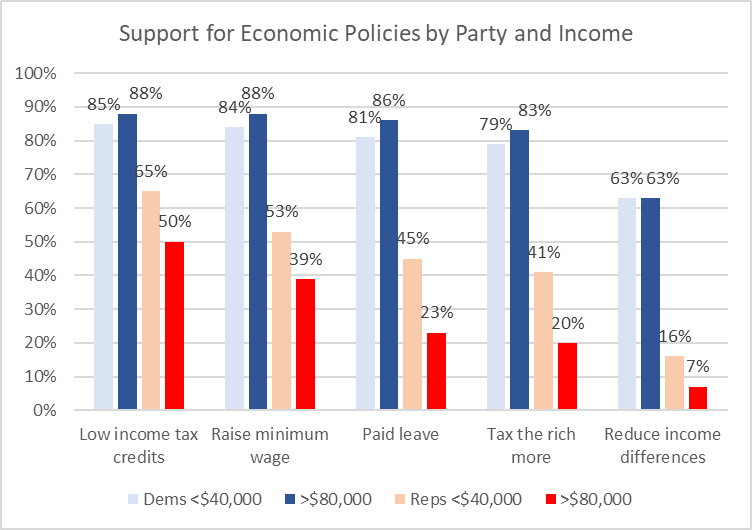 Support for Economic Policies by Party and Income

By contrast the study group found a divide among Republicans based on their income. Those making less than $40,000 (in pink) were much more favorable to those proposals than those making more than $80,000.

The most recent Marquette Law Poll asked Wisconsin voters about several of these issues. For example, an overwhelming majority supported accepting federal funds to expand Medicaid to cover those with incomes up to 138 percent of the poverty line. Only a plurality of Republicans were opposed. 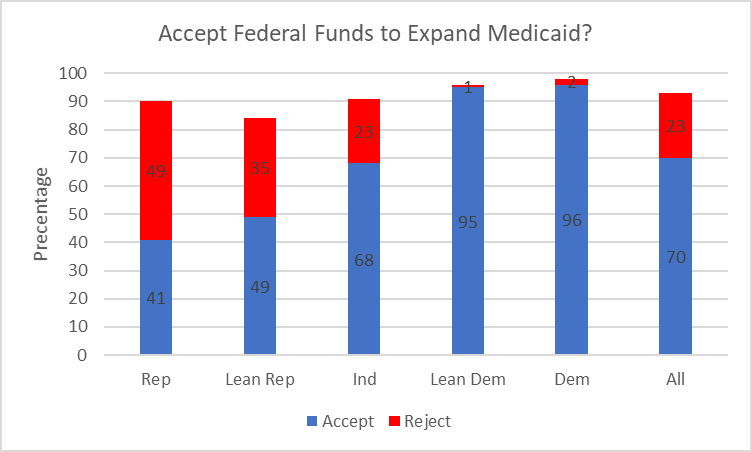 There are two separate arguments for accepting the federal funds. One is that doing so will increase access to health care for low-income people. The second is that it will free up state funds for other purposes, such as more aid for education. 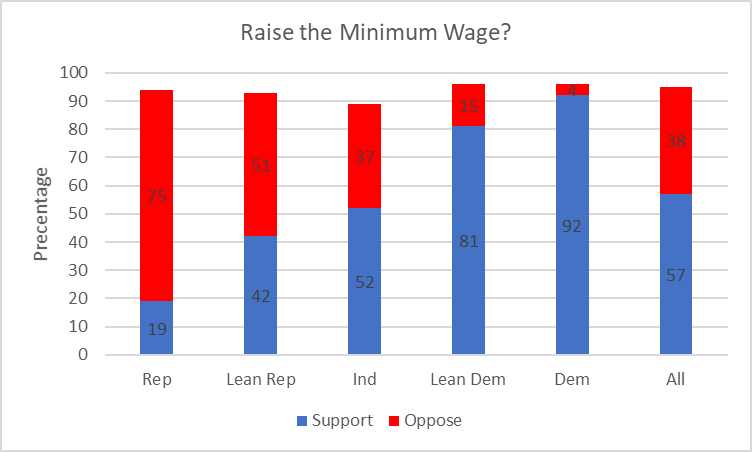 Finally, it is worth taking another look at the effect of the Manufacturing and Agriculture Tax Credit on manufacturing employment. Like the decision to reject the Medicaid expansion funds, the credit has the effect of reducing funds that could be used for other purposes, such as education. As with the Trump tax cuts, its benefits flow mainly to people who are already financially well off. 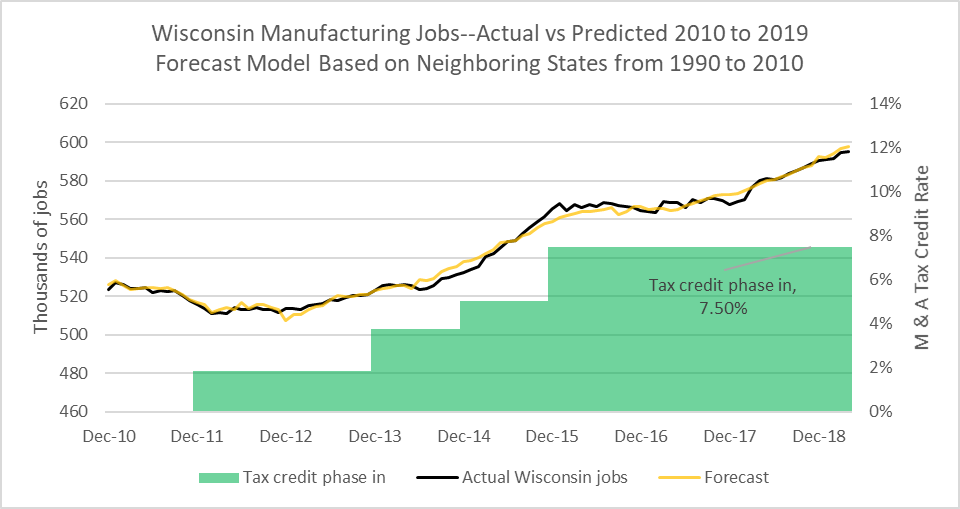 Wisconsin Manufacturing Jobs–Actual vs Predicted 2010 to 2019. Forecast Model Based on Neighboring State from 1990 to 2010.

It appears that the tax credit had a negligible effect on the number of jobs. Considering that such a tax credit goes mainly to firms that are already profitable, this may not be surprising.

In winning the Republican nomination for president and then the presidency itself, Trump tapped into a genuine concern among people feeling left behind by the economy. The fact that his administration has done so little since to address that concern should be an opportunity for Democrats.

2 thoughts on “Data Wonk: Can Democrats Win the State Assembly?”