By Jane Hampden, Wisconsin Public Radio - Jun 18th, 2019 11:29 am
Get a daily rundown of the top stories on Urban Milwaukee 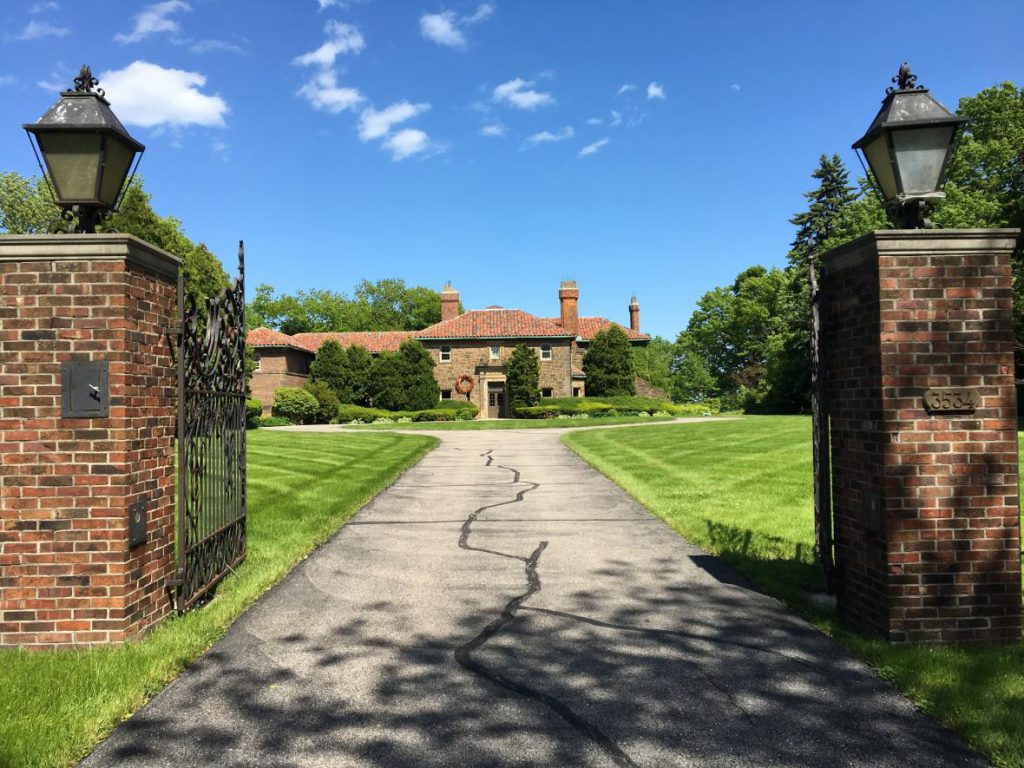 Milwaukee County Executive Chris Abele bought the 1927 mansion at 3534 N. Lake Drive in 2018. He plans to tear it down and build a new house overlooking Lake Michigan. Photo by Jane Hampden/WPR.

The Shorewood neighbors sat around a table in the back of Three Lions Pub, sharing homemade cookies and handing out postcards.They weren’t there for happy hour; they were encouraging residents of the suburb just north of Milwaukee to write to Milwaukee County Executive Chris Abele. A few days before, they learned Abele plans to tear down a 1927 Mediterranean Revival mansion overlooking Lake Michigan that he purchased last fall from its longtime owners.

“Demolitions can happen really fast and once something is gone, it’s gone,” said resident Dawn Blackmore. “Shorewood has to decide what Shorewood is.”

Blackmore, Rosie Bredeck and Joan Gorman, who organized the letter-writing campaign, have experience advocating for historic buildings; last year they worked to save Shorewood’s 90-year-old firehouse from demolition. But the mansion at 3534 N. Lake Drive, designed by noted Milwaukee architect Alexander Eschweiler, is privately owned.

The Hambrook family lived in the home for 33 years and sold it to Abele in 2018 for $2.6 million. They did not know he planned to raze it.

Sarah Hambrook, a Milwaukee pediatrician who is one of six siblings, recalled the home’s rich architectural details: a marble stairway, wrought iron railings, a silk ceiling and a pipe organ in the living room.

“We really feel like anybody who owns the house is a steward of the home and the history that surrounds it,” she said. “We want to make sure that that’s preserved, not for my family personally, but for the greater Milwaukee community now and in the future.”

The family started an online petition that has attracted around 1,000 signatures supporting preservation, but the Village of Shorewood cannot stop the tear-down as long as Abele follows local regulations. Shorewood has no historic preservation commission, which could, at least, slow the process.

The National Park Service offers municipalities a certification that provides tools and grants to preserve historic structures. In Wisconsin, the program is administered by the Wisconsin Historic Preservation Office. Seventy-two places in the state are certified; the Town of Westport in Dane County is the smallest, and the city of Milwaukee is the biggest.

Milwaukee formed its Historic Preservation Commission in 1981 after a beloved structure was torn down in the middle of the night: the Elizabeth Plankinton mansion on the Marquette campus, the subject of a long legal battle. Carlen Hatala, a historic preservation planner for the city, said the loss of a prominent building can spur local government action.

“If they can come up with a good ordinance that actually has some good protections built in, that’s for the better,” she said. “But some communities can’t achieve that.”

The Shorewood mansion controversy is prompting others to speak out in support of private property rights. Bob Schumacher has lived in Shorewood since 1970 and said Abele has a right to make decisions about his own property, as long as the new house is appropriate for the neighborhood.

“He can do what he wants with it, within reason,” Schumacher said. “He paid the money.”

In an emailed message to residents, Shorewood Village Manager Rebecca Ewald wrote that Abele’s demolition permit was under review by the village Planning and Development Department. The village’s Design Review Board will meet Thursday to consider the proposed new structure or a site restoration plan. Ewald said residents were welcome to comment, but, “if the property owner complies with the requirements, the village is not certain there is basis to deny the application.”

One thought on “Campaign Targets Abele’s Plan to Raze Home”