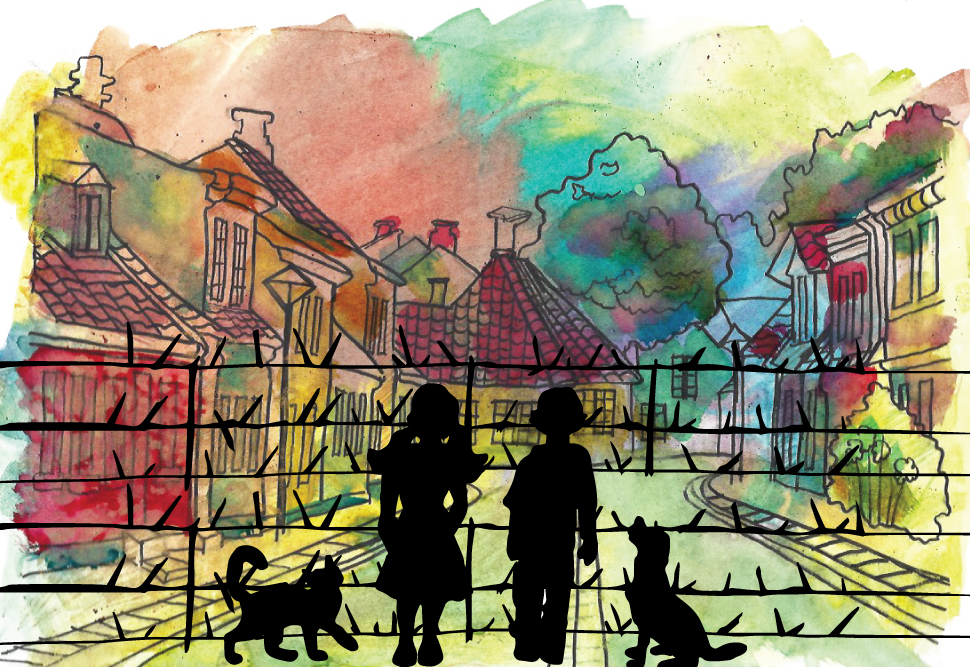 Attempting to deceive the world about its system of concentration camps, the Nazis designed a “village” for Jewish relocation in Czechoslovakia – Theresienstadt. This “model” camp served as an illusion to distract a world that did not want to know the truth. Into that setting, the Nazis sent prominent Jews and allowed a cultural life to develop. Even there, life was very difficult unless international dignitaries, such as the Red Cross, were visiting.

In 1942, in the midst of the turmoil in Europe leading up to World War II, composer Hans Krása created a children’s opera, Brundibar. The allegorical story about two children and friends who defeat the villainous Brundibar takes up themes of bullying, the importance of friendship and the triumph of good over evil. Almost everyone recognized the work as a commentary on the rise of Nazism. Brundibar, the evil organ grinder, sports a mustache, although a handlebar one. View a complete performance on Youtube here. 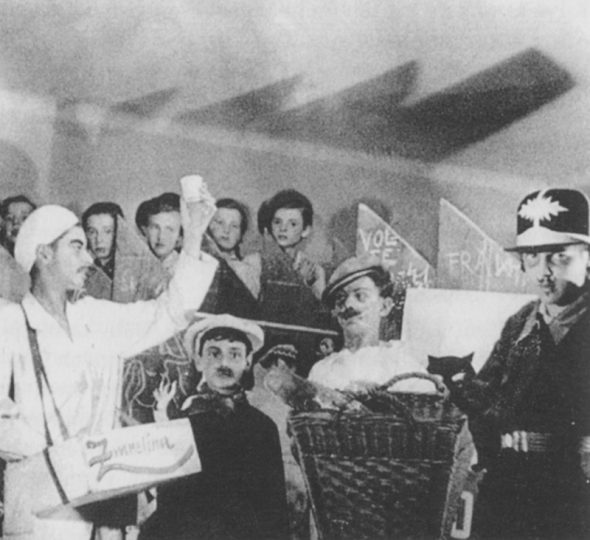 A 1943 production of Brundibar in Prague. Photo is in the Public Domain.

Recreated in Theresienstadt in 1943, Brundibar was performed nearly every week for 55 performances. As innocent as the story was, the lead actors were routinely replaced, as children in the camp were selectively transported to even more horrific camps, often to their deaths.

This Sunday, RUACH, a Milwaukee-based Jewish art and music organization, will stage a production at the Jewish Community Center. Two performances that day have been sold out. A third performance has been announced for next Tuesday evening.

This musical, with terrific music, a clever translation of the songs into English by playwright Tony Kushner (Angels in America) and a cast of local youth can be taken on its own as an entertaining experience. RUACH Executive Director Josh Richman finds value in the opera’s message: “the power of good over evil, includes anti-bullying messages, recognizing that bullying is a first step to more egregious sins if left unbridled.”

This production, however, reinforces the context of the original staging, incorporating documentary footage of the Theresienstadt story and recalling the premiere performance in an orphanage near Prague, Czechoslovakia. Director Elyse Edelman acknowledges that “it was important that this project remains grounded in the historical and cultural context in which Brundibar has evolved.  This clearly isn’t all about plot.  Hopefully, the way that we’ve used our materials will allow audiences to have that sense that they’re seeing a snapshot in history.”

Edelman notes: “Particularly with the older performers in the cast, I’ve noticed an ongoing appreciation for the ways in which a piece of art becomes more than just a means to entertain. I’ve watched as they’ve developed a richer and more dynamic understanding of the ways in which art teaches generations and preserves history.”

The actor Peter Strauss reflected on the importance of Brundibar as he directed a recent production:

You need to understand this kind of evil exists. And by understanding it, even at a very early age, you can position yourself to fight against it. It’s a tragedy of life that we endure this kind of horror but the lesson is there for you that you become the champion of liberty and of decency and of hope and expectation in this world as a human being only if you understand the story. It is remarkable when one realizes what these voices are emanating from and the horror that created this extraordinary desire to create a fairy tale and to allow children to sing it with the innocence and purity but also with that kind of weighty adult perspective of what this really is about.

The program will include two other works. McKinney will sing selections from a song cycle by Gustav Mahler, “Kindertotenlieder (Songs on the Death of Children)”. Based upon very personal poetry by Friedrich Rückert, the text reflects a mixture of feelings: anguish, fantasy resuscitation of the children, resignation. The final song ends in a major key and a mood of transcendence.

The MYSO chamber orchestra will also play an instrumental suite based upon songs written by Rabbi Michel Twerski, composer and religious leader of the local Congregation Beth Jehudah.

RUACH’s mission is to “awaken creativity through arts enrichment rooted in Jewish values and the rich cultural diversity of Sherman Park. Since 2004, RUACH’s performances, classes, and other innovative programs uplift and unite under-served communities throughout Greater Milwaukee. An impressive list of local and national foundations are helping to underwrite the Brundibar performances. Earlier this week, RUACH performed concert selections for students from several schools and an elderly audience. This expanded concert is aimed at adults. Publicity suggests that “parents should exercise considerable discretion as to the suitability of the performance for children, especially those under 10.”