By Shawn Johnson, Wisconsin Public Radio - May 20th, 2019 11:28 am
Get a daily rundown of the top stories on Urban Milwaukee 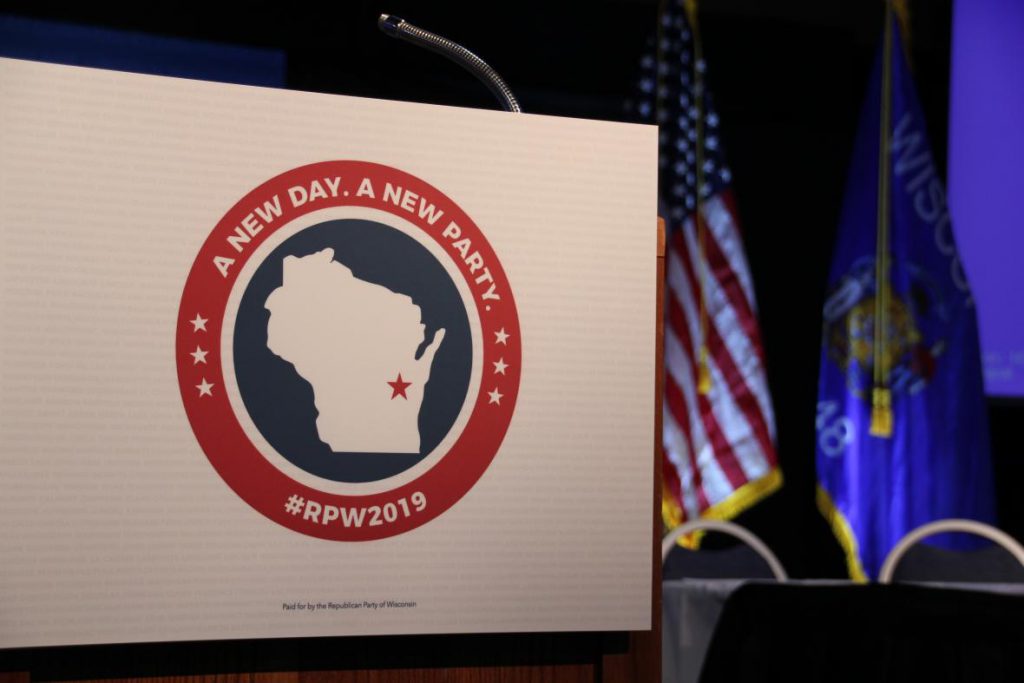 Wisconsin Republicans gathered in Oshkosh on Saturday, May 18, 2019 for their annual state convention. Photo by Shawn Johnson / WPR.

Wisconsin Republicans used their annual state convention in Oshkosh Saturday to call for tougher abortion laws and a return to the party’s grassroots, suggesting the agenda pushed by Gov. Tony Evers and other Democrats would help propel the GOP to victories in 2020. 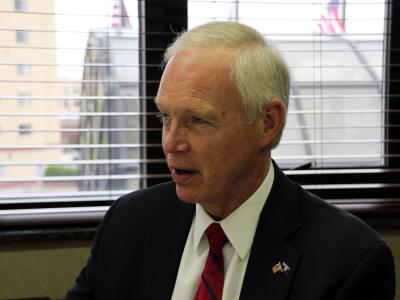 It was the first state convention for Republicans since their party’s losses in 2018, although activists spent more time celebrating the April election of conservative Judge Brian Hagedorn to the Wisconsin Supreme Court.

It was also the first time U.S. Sen. Ron Johnson had addressed a state convention crowd as the unquestioned leader of Wisconsin GOP, and Johnson left the door open to running for a third term the Senate, or possibly running for governor.

A Call For Stricter Anti-Abortion Laws

Saturday’s convention came just days after Republicans in the Wisconsin Assembly passed four bills that would restrict abortion in Wisconsin, including a so-called “born alive” bill that would require doctors to care for a fetus if it survives an abortion attempt.

The issue was front-and-center in the prayer led to begin the convention by Rev. James Reiff of Saint John’s Lutheran Congregation in Oshkosh, during which Reiff criticized GOP leaders.

“Heavenly father, you know that when Wisconsin Republicans had the majority under Gov. Walker, they did nothing to safeguard the rights of the preborn,” Reiff said. “Now, however, when we have a Democrat governor, these same Republicans piously claim that they’re against abortion, all the while knowing that any abortion bill they bring to the governor’s desk will be vetoed. Dear heavenly father, forgive our Republican legislators for their hypocrisy.”

Reiff called for lawmakers to reinstate a ban on abortions in Wisconsin.

Assembly Speaker Robin Vos, R-Rochester, addressed Reiff’s prayer during his own remarks to the convention, reminding activists that Republicans had ended most government funding for Planned Parenthood and passed a 20-week abortion ban during Walker’s tenure.

“I am profoundly proud of what we have done, especially over the last eight years, to protect life,” Vos said.

Vos said major restrictions to abortion would have to come in the federal court system, but states like Wisconsin played a role in that.

“It is a continuum of effort to push the envelope to make sure that at some point states get to decide, as they should under our Constitution, the definition of life and what exactly is allowed to happen in a state,” Vos said.

U.S. Sen. Johnson told reporters he regretted that the U.S. Supreme Court had ever issued its Roe v. Wade decision, the 1973 ruling that legalized abortion nationwide.

“We should let that process play out democratically state by state,” Johnson said. “The fact of the matter is, you allow it that way, if you don’t like the result of the state where you currently reside, you can move.”

Other states have recently passed abortion restrictions that are even stricter than Wisconsin’s, namely Alabama, which banned abortions. Johnson said he did not support Alabama’s law.

A Focus On Democrats

Vos and Senate Majority Leader Scott Fitzgerald also took aim at Gov. Evers, which provoked an accusation of sexism from the governor’s staff.

Vos told Republican activists that Evers was “out of touch” and “way too liberal,” saying his budget was full of “crazy ideas” that most of Wisconsin does not support. 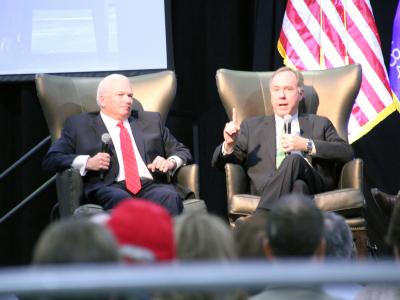 “He has taken all of the wacky ideas that people who live in Dane County and wear Birkenstocks think are good,” Vos said.

Vos said many of Evers’ proposals would not be part of the final budget that passes the Legislature, including Evers’ plan to accept federal funding to expand Medicaid.

“I want to promise you that it will be over our dead bodies,” Vos said.

Vos and Fitzgerald, R-Juneau, said Evers and his staff had done a poor job of reaching out to the Legislature.

In an email, Evers spokeswoman Melissa Baldauff, said Vos and Fitzgerald were to blame for their reluctance to deal with Evers’ Chief of Staff Maggie Gau.

“The governor has communicated repeatedly to GOP leadership that they should work with his chief of staff, just like they did under the previous governor,” Baldauff said. “That directive wasn’t confusing to them when the chief of staff was a man. Vos and Fitzgerald are clearly uncomfortable or simply unwilling to work with a leadership team made up entirely of women.”

Baldauff also pushed back against Republicans’ comments about the budget.

“Republicans continue to ignore the will of the people,” Baldauff said. “Only a party in complete disarray would attack investments in special education funding, mental health and substance use disorder treatment, and lead poisoning prevention and treatment as ‘wacky’ and ‘crazy.'”

In addition to Baldauff and Gau, Evers’ leadership team is filled with women. Walker’s chiefs of staff during his eight years in office were men.

But Vos noted in a tweet that the leaders on his own Assembly staff are women.

While the Wisconsin Supreme Court is officially a nonpartisan office, Justice-elect Brian Hagedorn also spoke at the GOP convention, telling party activists that they made the difference in his victory. 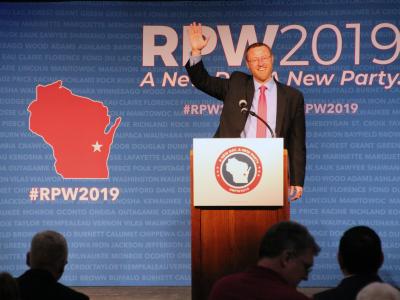 “When I got punched, you were the ones who punched back,” Hagedorn said. “You did this. You saved the Supreme Court.”

“We cannot take elections off,” Hagedorn said. “We need to keep him on the Wisconsin Supreme Court.”

Johnson told delegates that he wants to help the party create a “grassroots juggernaut” for the 2020 election, saying that given all the enthusiasm among Democratic voters, Republicans would need to turn out more voters than ever before if they hope to win in 2020.

Johnson said he’d like to see a corporate structure for the state Republican Party, where the 72 counties resemble “franchisees” and the state party provides guidance.

He also said he wanted Republicans to run candidates in every office, even those they can’t win.

“If you’ve ever thought about running, this is the election cycle to step up and do so.”

Johnson wouldn’t rule out running for a third term in 2022, even though he had previously said he would leave office after two terms.

Asked if Johnson and Walker could both run for office in 2022, Johnson would not rule it out.

One thought on “State GOP Calls for Stricter Abortion Laws”