By Laurel White, Wisconsin Public Radio - May 19th, 2019 06:43 pm
Get a daily rundown of the top stories on Urban Milwaukee 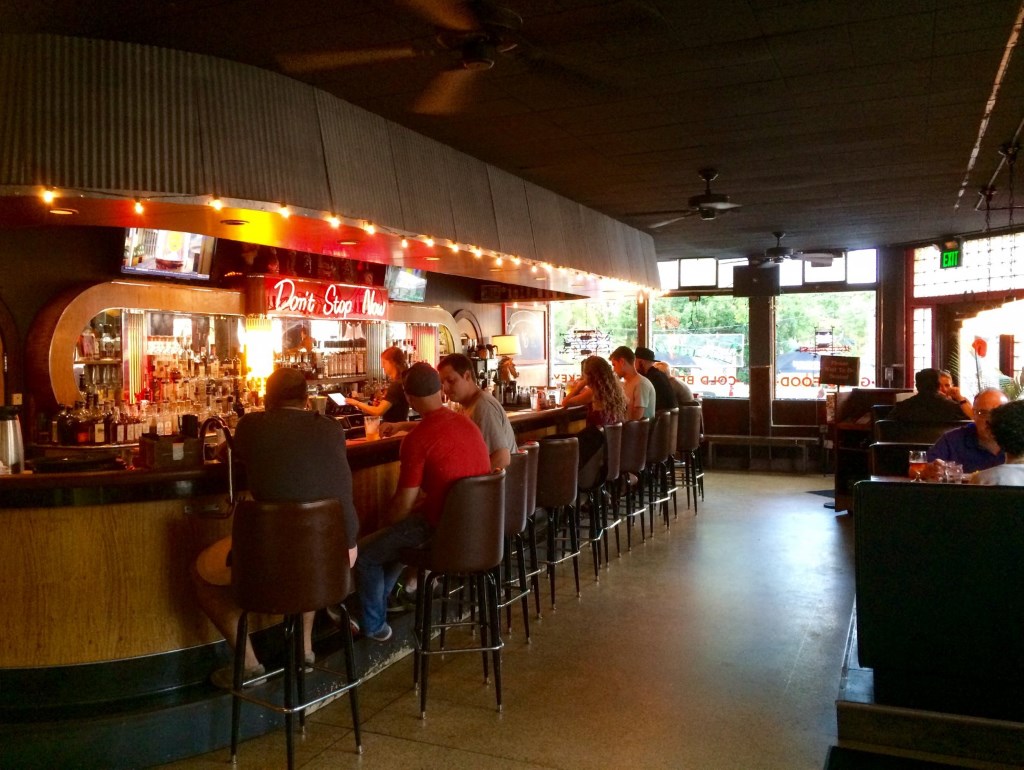 The bar at the Palomino. Photo by Joey Grihalva.

The sun is starting to come up on Sunday morning. It’s just before 6 a.m., about 40 degrees and people are swaddled in sleeping bags in a brewery parking lot.

Greg Francyk is awake, sitting in a lawn chair.

“I think pretty much everyone is sleeping,” he said, surveying the hodgepodge of tents set up outside Vintage Brewing Co. in Madison. Air mattresses are poking out of a few tents and some campers have brought grills and are starting to make breakfast.

“It’s a thing to do — you show up, you have some fun, you drink some beers, you grill some meat,” he said, filling a plastic foam plate.

The atmosphere in the parking lot is camping-meets-music festival-meets-doorbuster line on Black Friday. And everyone is here for just one thing: beer.

About 250 people are waiting in line to buy tickets to a craft beer festival called Great Taste of the Midwest. Some have been camped out for nearly 24 hours already. The tickets go on sale in six hours.

This is Wisconsin, and people are passionate about their beer. 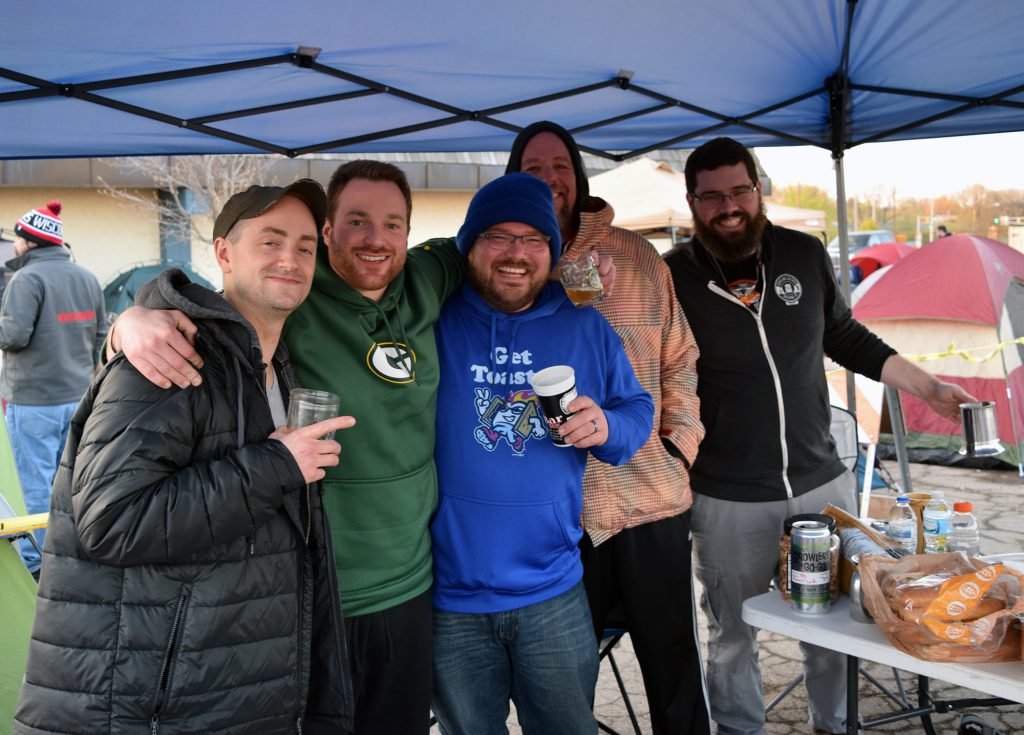 Zach Holder, left, Bill Disrud,center, Nick Courtney, right, and friends arrived before midnight on Sunday, May 5, 2019, to get in line to buy tickets for the Great Taste of the Midwest. Photo by Laurel White/WPR.

A Drink For Every Occasion

In fact, eating and drinking outside is Wisconsinites’ second-favorite recreational outdoor activity. A 2019 survey from the state Department of Natural Resources ranked it just behind walking and running.

Julia Sherman, coordinator of the Wisconsin Alcohol Policy Project at the University of Wisconsin-Madison, said alcohol is associated with things like summertime, sports and college campuses just about everywhere, but she believes Wisconsin is different.

“I think that a lot of it comes from the fact that it’s not specific occasions, it’s almost every occasion,” Sherman said.

“Several people that have moved here have mentioned to me that they’re surprised that the adults at a child’s birthday party would have alcohol,” she said. “But in Wisconsin, many people would not think of having adults over that they didn’t offer an alcoholic beverage.”

The Wisconsin Alcohol Policy Project estimates, based on federal statistics, the average Wisconsinite has 634 drinks each year. That’s nearly 150 more than the national average.

Jim Draeger, a retired state historic preservation officer, co-authored “Bottoms Up,” a book that explores the history of bars and brewing in Wisconsin. He said there’s a cultural consensus that Wisconsin is a place that imbibes freely and frequently.

“People are told to think of Wisconsin that way, because people constantly talk about it that way,” Draeger said.

He believes media plays a big part in perpetuating the stereotype of Wisconsin as a boozy state.

That includes comedians like Lewis Black, who has riffed on the theme during standup appearances in the state.

“I love Wisconsin. I love coming here. I perform here a lot because I’ve discovered that you people apparently have some sort of federal grant for drinking,” he said at one performance. 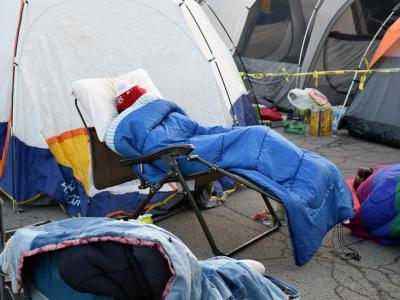 Someone snoozes while waiting in line for tickets for the Great Taste of the Midwest in Madison on May 5, 2019. Photo by Laurel White/WPR.

Draeger said Wisconsinites play into this sort of message.

“People are more outwardly social about alcohol in Wisconsin than they are in other places,” he said.

Draeger outlined examples of “outwardly social” drinking: things like craft beer festivals, street festivals and or simply choosing to grab a drink at a local bar rather than imbibing at home.

He said Wisconsin has, historically and today, more bars than the vast majority of other states.

Plenty To Go Around

Some media outlets have used federal census data to estimate the number of bars or alcohol licenses per capita in Wisconsin, saying it has one of the highest rates in the country. Those numbers have also been used in lists of the “drunkest cities in America,” which often include Wisconsin communities.

“We’re, to my knowledge, the only state where you can have a beer, wine or distilled spirits tasting at a gas station,” she said.

“And you can — it’s national — you can basically pull the lines of Wisconsin right off the map, because we’re practically solid red,” Sherman said.

Some point to the state’s German heritage as an impetus for Wisconsin’s long-term relationship with alcohol, but both Sherman and Draeger refuted that.

Sherman pointed out the rate of alcohol dependence in Germany is just 3.5 percent, compared to 8 percent in Wisconsin.

Draeger said there were a number of other factors that aligned to make Wisconsin a national hub for alcohol production and consumption.

According to Draeger, Wisconsin’s relationship with beer, in particular, was cemented by a perfect storm of immigration, geography and a major disaster for one of the state’s southern neighbors.

German, Polish and Irish immigrants all made up a big part of Wisconsin’s population in the early 19th century and brought with them a history of drinking and brewing beer, but the geography of their new home state played a large role in making it possible for them to continue brewing traditions, Draeger said.

“You needed good crop land to grow the barley and the hops. You needed ice, which is pretty limiting, if you think about it in the geography of of the United States,” he said. “Those two factors certainly favored Wisconsin.”

He also pointed out Wisconsin had an ample supply of quality fresh water, which is crucial for concocting good-tasting brews.

Of course, Chicago had all of those things too. And, on top of that, it was was railroad hub, making it easy for Chicago companies to ship their beers across the country, spurring industry growth.

So why didn’t Chicago become the brewing capital of the country instead of Milwaukee?

According to Draeger, the Great Chicago Fire of 1871 derailed the city on its path to alcohol dominance.

“The fire burned down most of the breweries in Chicago and the Milwaukee breweries stepped into that market,” he said.

And so, companies like Miller, Pabst and Schlitz became giants and cemented Wisconsin as a brewing industry hub that still exists.

A Call For Change

Sometimes, Wisconsinites poke fun at their own image as social drinkers.

They wear “Drink Wisconsinbly” T-shirts, take pride in tailgating in below-zero weather and share links on Facebook to media reports that rank the state high on binge drinking or “party city” lists.

Sherman called it a “perverse pride.”

“But attitudes can change,” she said. “And attitudes are going to have to change here in Wisconsin.”

Sherman said the cultural association Wisconsinites sometimes embrace has a dark side and a high cost: health care costs, law enforcement costs and human costs when lives are lost.

She said to avoid racking up more of those costs, Wisconsin communities need to embrace other parts of the state’s identity.

So, she issues this gentle reminder: Wisconsin has a lot more to offer than just a cold beer.

Accessibility And Acceptability: How Wisconsin Developed A High Tolerance For Booze was originally Published by Wisconsin Public Radio.